Will Hamas give up its weapons as part of peace deal?

In the wake of Israeli Prime Minister Benjamin Netanyahu’s call for Hamas to be disarmed, officials from the movement have rushed to react and roll out possible disarming scenarios. 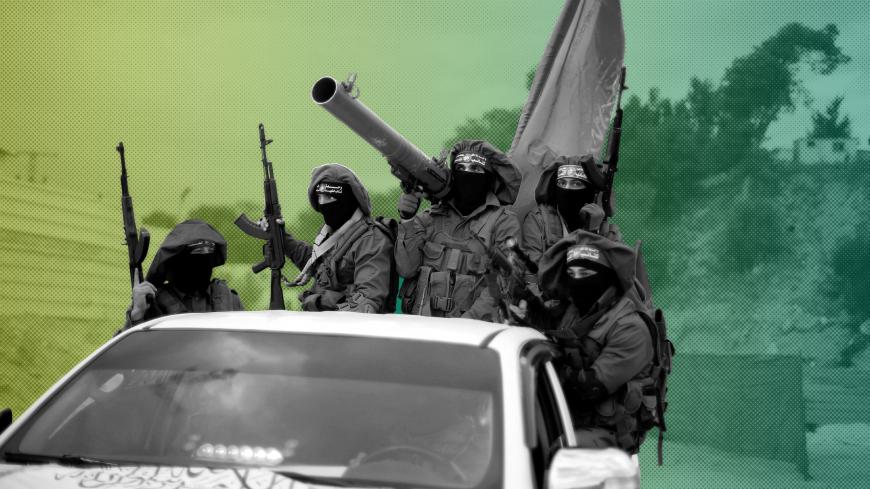 Palestinian Hamas militants take part in a military parade marking the 29th anniversary of the founding of the Hamas movement, in the northern of Gaza Strip, Dec. 8, 2016. - REUTERS/Suhaib Salem

US President Donald Trump said during his speech about the deal of the century Jan. 28 that the implementation of the deal requires putting an end to Hamas’ malicious “terrorist” activities. Israeli Prime Minister Benjamin Netanyahu, for his part, lauded on the same day the plan’s call for “Hamas to be disarmed and for Gaza to be demilitarized.”

In response to these Israeli and US calls, Hamas issued a series of reactions. Ismail Haniyeh, the head of Hamas’ political bureau, made it clear in press statements Feb. 5 that Hamas’ weapons shall not be part of any plan, and the movement’s strategy of developing a military force shall go so far as to include the West Bank and Jerusalem.

Khalil al-Hayya, Hamas' deputy head in Gaza, said in a press statement Jan. 28 that Trump’s declaration regarding the weapons of Hamas is just nonsense.

Mahmoud al-Zahar, a member of Hamas’ political bureau, told Palestine Today Jan. 28 that Israel had repeatedly tried to disarm Hamas, but to no avail, and this could only happen if Israel and the United States proceeded to kill all Palestinians.

Wasef Erekat, a Palestinian military expert in the West Bank and former artillery unit commander of the PLO, told Al-Monitor, “Hamas’ obsession with the Israeli and US intention to disarm it is understandable and logical, but such intentions will only materialize through an Israeli war on Gaza. Rockets, artilleries, weapons fired from a distance and cross-border weapons are the most dangerous weapons that Israel believes should be taken away from Hamas. Light and medium weapons are not important for Israel, even though Hamas may substitute any weapons it might lose in any war with local industries and smuggling from outside Gaza.”

Yusef al-Hasayneh, a member of the political bureau of the Palestinian Islamic Jihad (PIJ), warned Feb. 5 during a political symposium organized by the movement in Gaza against launching a war on Gaza to disarm Hamas in the implementation of the deal. He also warned against doing so through soft tools that include economic prosperity, a long truce or closing the outlets that supply Hamas and the PIJ with weapons.

Hamas leader Ismail Radwan told Dunia al-Watan website Jan. 28 that the weapons of the resistance are the target of the deal of the century, but this is a red line, and war is the only way this weapon could be taken away by force.

Hazem Qassem, a Hamas spokesman, told Al-Monitor, “Israel’s intention to disarm Hamas is not recent, and I have repeatedly tackled it before, so including it in the deal does not change much. This goal will not be achieved because Hamas will not give up its weapons, which are surrounded by a strong popular environment that believes in it. Our weapons are legitimate because we use them to defend our people based on international laws, and Israel will not be able to take them away from us. There are even Israeli circles that find this goal quite unrealistic.”

Uri Savir, Israel's former deputy foreign minister, revealed in an article published by Al-Monitor in March 2018 that according to the deal, Gaza will be part of the Palestinian state, provided that Hamas is disarmed.

However, Amos Gilboa, a former adviser at the prime minister's office for Arab affairs and retired Israeli army brigadier general, told Maariv Jan. 30 that while the deal talks about disarming Hamas, this remains an empty dream that will not come true because it raises a question about who will disarm the movement, and this alone bodes ill for the deal.

Mohammed al-Braim, spokesman for the Popular Resistance Committees, told Al-Monitor, “The Israeli and US threats to disarm the resistance as part of the deal of the century may be carried out in the coming period, and the resistance is considering and readying itself for the worst-case scenario, which could be a grinding Israeli war on Gaza. However, the Israeli army, with all its capabilities, will not be able to disarm Hamas. Reports about mechanisms for handing over weapons are just unrealistic, as Israel cannot have the weapons voluntarily handed over but might continue to send mediators to persuade us to do so.”

This is not the first time that Hamas faces Israeli and international disarmament demands. In February 2006, the International Quartet called for the disarmament of the movement, as the Palestinian Authority (PA) stressed in 2017 the need to have one legitimate weapon, and Hamas rejected this. In March 2019, an Egyptian plan spoke about disarming the movement in exchange for lifting the siege on Gaza.

Imad Abu Awad, an Israeli affairs researcher at the Vision Center for Political Development in Turkey, told Al-Monitor, “It is in Israel’s interest for the deal to include the dismantling of Hamas’ advanced and normal weapons, but the question arises as to the possibility of this actually taking place. This may be carried out through an Israeli military operation or by leading the PA to return to Gaza and calling on it to disarm the movement, even though Hamas’ concerns over its weapons may lead to a PA-Hamas agreement. Some Arab countries may also interfere to dismantle Hamas’ weapons, which could also be taken away through a tightened blockade on Gaza to pressure Hamas into handing over its weapons. Egypt might also place pressure on Hamas in this regard, leading to a confrontation between the two sides.”

The Israelis and Americans do not expect Hamas to take the initiative to voluntarily hand over its weapons, some of which is obtained from Iran, Sudan and Libya via Sinai, while the rest is manufactured locally. This suggests that Israel may seek to disarm the movement through the military option — an all-out war. This scenario could lead to major surprises on the part of Hamas and could incur huge and unbearable Israeli losses.

Israel has waged three fierce wars against Gaza to dismantle Hamas’ weapons, but it has yet to achieve this goal, and there is currently no Israeli consensus on the war given the lack of guarantees that such a war can achieve the desired goal. Also, such a war might lead to unknown results.

In this context, it only seems natural for Hamas’ concern over its weapons to push it to conclude an agreement with the PA through reconciliation efforts that have been resumed in the wake of the announcement of the deal. The besieged movement is unable alone to bear the burdens of the Palestinians in Gaza, and it does not desire a brutal Israeli war in Gaza to disarm it.

However, the problem is that President Mahmoud Abbas announced Feb. 3 that he does not believe in weapons and that he will seek to have a demilitarized state of Palestine. He also pointed out that the PA does not want to return to Gaza, let alone run its financial and living affairs.