Iraqi special forces stand to gain stature with victory over IS

Iraq's counterterrorism bureau, which is receiving accolades and lots of support, could become even more powerful in the post-Islamic State era. 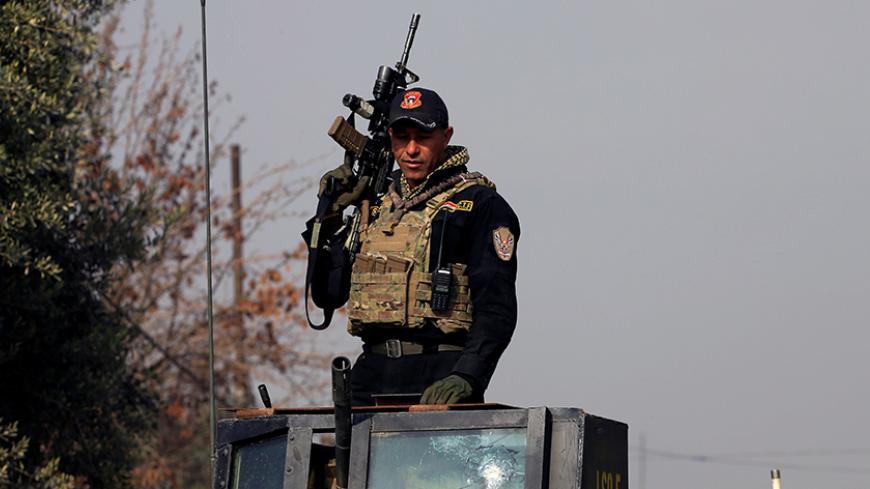 A member of the Iraqi Counter Terrorism Service stands in a military vehicle during a battle with Islamic State militants in east of Mosul, Iraq, Jan. 21, 2017. - REUTERS/Alaa Al-Marjani

The Iraqi Counter Terrorism Service's star is rising as it battles the Islamic State (IS). The unit's success is fueling its influence, which is only expected to grow now that Iraq has launched what it hopes will be the final stage of liberating western Mosul.

Iraq has given the most important task of that operation to the counterterrorism force and its elite unit, the Iraqi Special Operations Forces (ISOF), also known as the Golden Division. ISOF commander Lt. Gen. Sami Arda said Feb. 17, "Anti-terrorism forces will be responsible for undertaking the street battles in the [western half] of Mosul." They also have prepared the plan for the operation, according to the commander of counterterrorism forces Lt. Gen. Abdul Ghani al-Asadi. Now, they are moving toward the western heart of the city from the south.

Al-Monitor learned from a senior source at the counterterrorism bureau, who declined to be named, that after the liberation is completed, bureau officers could serve in high posts, including the premiership’s military secretary, army general staff, military attache in Washington, the Mosul operations command and even the Popular Mobilization Units (PMU) presidency.

The counterterrorism bureau has already received increasing attention recently in both security and political spheres. Prime Minister Haider al-Abadi has been recommending bureau members for positions in both areas, including the new defense minister, Maj. Gen. Irfan Hayali. Hayali previously served as the head of the bureau's training and development unit for 10 years.

After protesters stormed Baghdad's Green Zone in April, Abadi removed Lt. Gen. Mohammed Rida from duty and appointed Maj. Gen. Karim Abboud al-Tamimi in his place to head Green Zone security. Tamimi had been a leader in the counterterrorism bureau, serving in different positions there since 2007.

This indicates that officers within the counterterrorism bureau are gradually taking up top security and military positions in the state, especially following the bureau’s achievements against IS.

The most recent battles in eastern Mosul produced a field leadership that was accepted by both Shiite and Sunni Muslims. Pictures of counterterrorism bureau leaders were everywhere on social media. They have major support from the people, who recognize that these leaders are an extension of the former Iraqi army, which was disbanded in 2003.

At the same time, some members of the PMU see these leaders as potential competitors.

“I fear the ambitions of these leaders, amid the military support and flow of weapons from the United States," a PMU leader who spoke on condition of anonymity told Al-Monitor.

After the liberation of eastern Mosul, the bureau, army brigades, the Special Weapons and Tactics team, and the federal and local police were charged with preserving security there, according to Lt. Gen. Abdullah Yarallah, a commander of one of the liberation operations.

Concerning the liberation of western Mosul, the counterterrorism bureau is in charge of securing the floating bridges from one side of the Tigris River to the other. The bureau, alongside its two brigades, is responsible for breaking IS defense lines along the Tigris, which runs through the city.

In an exclusive statement to Al-Monitor, one of the prominent leaders in the bureau, Maj. Gen. Abdul Wahab al-Saidi, said bureau units neutralized large numbers of IS fighters and leaders in the battles for eastern Mosul, dealing a severe blow to IS morale. He expects the operation to retake western Mosul to be easier, given that IS has been hit hard already and given that the western part of Mosul is smaller.

The counterterrorism bureau also has strong support from parliament. In August, parliament passed a bill defining the bureau as being part of the security and intelligence apparatuses and a legal entity linked to the general commander of the armed forces.

The law gave the bureau broad powers, including the ability to establish a department for intelligence, military and combat pilot training. The bureau is also allowed to arrest terror suspects and can request telephone taps, monitor social networking sites and seek to have bank accounts frozen.

“This bill has allowed the bureau to be completely independent from the Ministry of Defense, after having been associated with it administratively and in terms of salaries and appointments. This bill boosted the morale of the bureau’s fighters, as now they feel their rights are preserved and protected," Saidi said.

Also, the 2017 budget allows for a $2.5 billion contract with a Chinese company for arms and ammunition supplies to the ministries of Interior and Defense, the PMU and the counterterrorism bureau.

The bureau also receives direct support and training from the United States and other coalition members. A TV report on France 24 in November showed French special forces officers accompanying the counterterrorism units for advisory and training purposes in operations to liberate Mosul.

All of this mounting influence indicates that the counterterrorism bureau will assume a major role in the post-IS era not only at the military level, but also at the political and security levels.