What is the fate of foreign IS fighters in Iraq?

Iraqi security forces arrested dozens of foreign fighters for the Islamic State during the battle of Mosul, but Baghdad must now decide their fate. 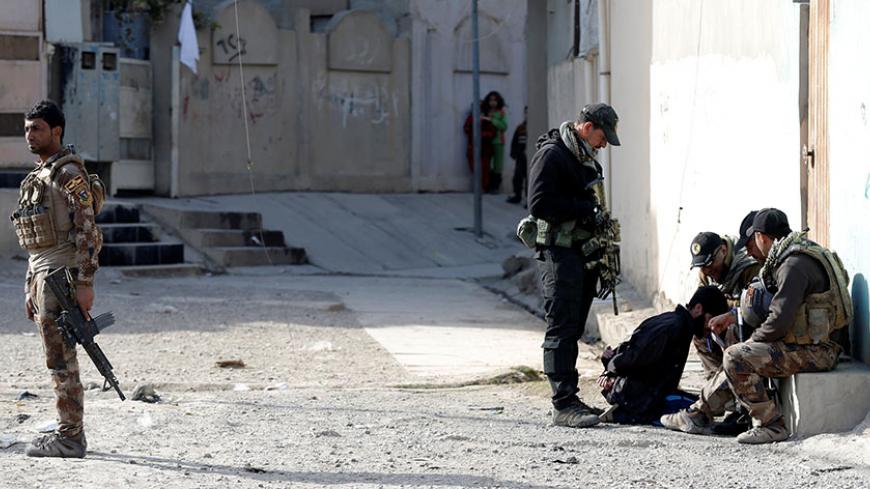 Many other IS foreign fighters have returned to their home countries. The European Union's counterterrorism coordinator, Gilles de Kerchove, said Aug. 9 that an estimated 5,000 European fighters, mostly from France and Belgium, had been trained in Syria and Iraq, and that one-third of them had returned home. France's interior minister said Aug. 6 that 271 French jihadi militants had returned from war zones in Iraq and Syria.

But not all of the fighters could make it back to their home countries, as some militants were captured by Iraqi forces. Reuters published videos July 13 showing a group of shirtless IS fighters sitting on rubble in Mosul. The Iraqi parliamentary Security and Defense Committee last month estimated the total number of foreign fighters who entered Iraq and joined IS ranks to be 30,000, of which 28,000 were killed. However, other studies show far lower numbers.

Lt. Gen. Abdul Wahab al-Saadi, deputy commander of Iraq's Counter-Terrorism Bureau, told Al-Monitor via a phone call that foreign IS women fighters had been arrested. While saying IS had a large number of female fighters, he did not specify the number of women in IS ranks. Saadi also said searches are still ongoing in Mosul's Old City. He said those arrested are referred to a judge assigned to the Counter-Terrorism Bureau in Baghdad; the prisoners are investigated in the bureau first and then the judge refers them to other special courts.

Saadi confirmed the arrest of a young Chechen fighter in addition to a group of foreign women, including five Germans, who were transferred to Baghdad. Saadi said that some of the women blew themselves up when Iraqi forces were conducting operations to liberate Mosul.

He said the majority of foreign fighters in Mosul were suicide bombers. "This is why they did not surrender. They were either killed in battle or blew themselves up,” Saadi said.

More than 20 women, including the five Germans, one of them age 16, are facing the death penalty for joining IS. The five German women are being held in Counter-Terrorism Bureau facilities in Baghdad while their cases are being investigated.

Saadi says the women will be referred to the courts when the investigation concludes. If convicted, they would be punished following Iraq's anti-terrorism law, which calls for the death penalty. Their bodies would be handed over to Germany should the German government demand it.

Western and Arab intelligence agencies are interested in what the female fighters tell investigators, especially if the women reveal any information on IS-affiliated cells around the world and how fighters have been traveling to Syria and Iraq.

The head of the anti-terrorism forces, Lt. Gen. Abdul Ghani al-Asadi, said in previous statements that the foreign fighters "never surrendered" and often choose to fight to the death.

The Middle East Online website said that when the operations to recapture Mosul's Old City were launched June 16, foreigners made up 20% of IS fighters, or around 1,200 of about 6,000 militants. IS reportedly forced foreign fighters to stay in houses, most of which were shelled.

The US Congress' Homeland Security Committee in 2015 received an assessment of the risk of foreign fighters and "terrorist" organizations in Syria and Iraq, where security officials reported that the numbers of foreign nationals traveling to areas of conflict had reached an unprecedented level. The security report estimated the number of foreign fighters to be 25,000, with more than 4,500 from Western countries.

Hisham al-Hashimi, an expert on terrorist groups and organizations, said foreign fighters were attracted to Iraq for two main reasons: media propaganda and the declaration of the state of the caliphate, not sex and money, as has been commonly reported in some media outlets.

Hashimi told Al-Monitor that relatively few of the thousands of foreign fighters were arrested, saying most of them either fled or were killed during combat, because they “prefer death to being arrested.”

“Many women fighters blew themselves up in the midst of Iraqi forces during the evacuation to the left [eastern] side of the city of Mosul, while others were arrested,” he said. He said the numbers of arrested female fighters are relatively low.

A source in the Counter-Terrorism Bureau, who refused to be named, said 20 foreign women were arrested. The source said the five German females were found in an IS tunnel in Mosul's Old City and were wearing explosive belts.

Mithal al-Alousi, a member of the parliamentary Foreign Relations Committee, said foreign fighters are sent to the Radwaniyah prison in Baghdad after their health and identity are checked and verified. The consulates of the relevant countries are informed of the prisoners' names.

“As per international conventions, consulates have the right to check on their nationals in local prisons,” Alousi told Al-Monitor.

Alousi denied reports that German prisoners are receiving financial or diplomatic support from the German Consulate in Iraq for their release, and said they are in good health.

Many international agreements signed by Iraq stipulate that a foreign national who is sentenced to imprisonment under the Iraqi penal code be sent to his or her home country to spend his or her time in prison there.

In the case of the death penalty against foreign nationals, the execution is carried out in Iraq, and the bodies are sent to their home country.