A video of a new police force in Syria trained and equipped by Turkey shows the troops chanting Islamist and nationalist slogans, casting doubt about Ankara's claims that it has no designs on its former Ottoman dominion. 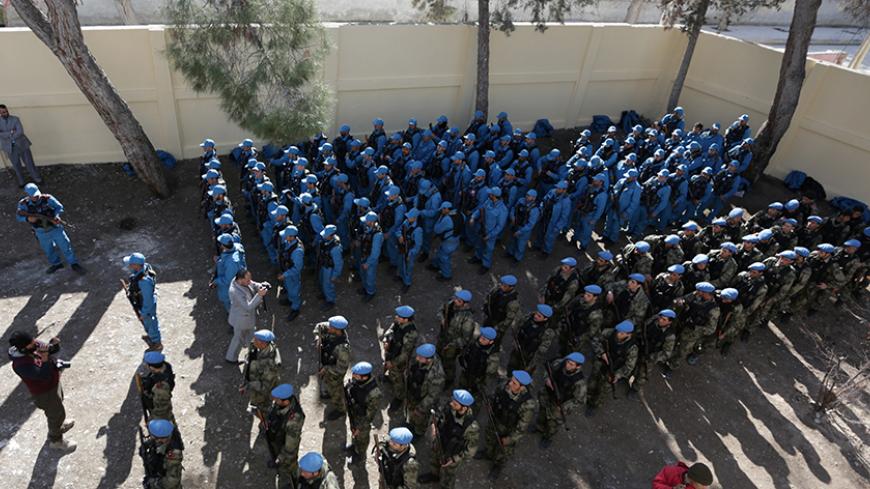 Members of the "Free police" attend a ceremony celebrating their inauguration in the Syrian border town of Jarablus, Syria, Jan. 24, 2017. - REUTERS/Khalil Ashawi

When Turkey intervened in northern Syria five months ago, it claimed it had no designs on its former Ottoman dominion and that its only goals were to cleanse its borders of the Islamic State and to eliminate what it called the terrorist threat posed by the People’s Protection Units (YPG), the US-allied Kurdish militia that is paradoxically the most effective force against the jihadis.

But Syrians who saw a video of a new police force trained and equipped by Turkey might very well think otherwise.

The scene is reminiscent of another video clip published by the pro-government daily Yeni Safak that showed Turkish special police forces chanting Islamist slogans during a training session in Istanbul.

In a ceremony marking the formation of the Syrian squad, Ali Yerlikaya, the governor of the neighboring Turkish province of Gaziantep, declared, “Today is a very important day. With police forces deployed, Jarablus gives hope for a free Syria. The situation in Jarablus will improve day by day thanks to Operation Euphrates Shield.”

Yerlikaya revealed that the 440-member force had undergone five weeks of training in the southern port city of Mersin, where ships had brought weapons to the rebels in the early years of the Syrian uprising before the flow dried up.

Reuters correspondent Khalil Ashawi reported from the Syrian rebel-held town of Jarablus on the Turkish border, “The Police and National Security Force is a sign of a deepening Turkish influence in north Syria, with the new police cars and station having both Turkish and Arabic writing on them.” Ashawi observed, “The new, armed security force is made up of regular police and special forces, who wear distinctive light blue berets. They are Syrians, but received five weeks of training in Turkey. Some wore a Turkish flag patch on their uniforms at the inauguration ceremony on Tuesday.”

The force formally began work on Jan. 24. Free Syrian Army rebels took Jarablus from the Islamic State in August. It was the first town to fall to the Turkish-led Operation Euphrates Shield. The Turkish-backed rebels have secured a more than 100-kilometer (62-mile) stretch along the Turkish border and a 2,000-square-kilometer (1,200-square-mile) chunk of territory is now under their control. “Gaining this depth has been very important for Turkey’s defense in preventing [IS'] rocket attacks, and for overcoming the [IS] terror threat posed by rockets launched by mobile platforms,” EDAM, an Istanbul-based think tank noted in a Jan. 19 policy brief.

The Turkish authorities say nearly 24,000 Syrians refugees have returned to Jarablus since the town was liberated. Turkey has helped rebuild schools, hospitals and water infrastructure, allowing life to gradually resume a semblance of normalcy.

But Turkey’s exit strategy for Syria remains unclear and its troops remain bogged down near the IS-held town of al-Bab, with at least 11 tanks immobilized so far. The lack of progress in al-Bab is disrupting Turkey’s plans to move against the YPG, though it continues to regularly shell YPG positions in and around the towns of Afrin and Manbij. Backed by US airpower, the YPG-led Syrian Democratic Forces have meanwhile captured dozens of villages including Suwadiya, west of Raqqa, and have reached the strategic Tabqa Dam. The mixed force of Kurds and Arabs announced that it has captured over 2,500 square kilometers (1,500 square miles) in the western Raqqa governorate as part of the second phase of the US-backed "Wrath of the Euphrates" Operation, Kurdistan 24 reported.