Not everyone close to the government thinks developing relations with Russia to counterbalance tense ties with the West is the right way to go. 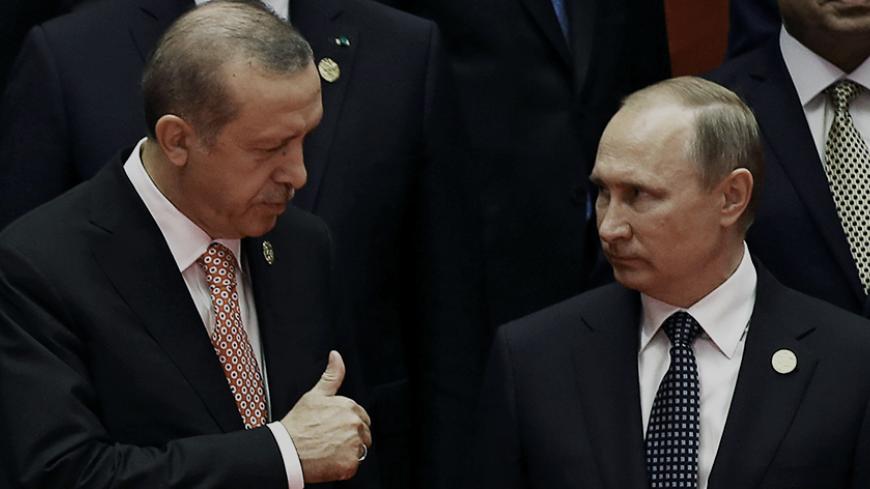 Spurred by anger at the West, Turkey appears to be moving increasingly into Russia’s political orbit, especially in Syria. The Dec. 31 adoption by the UN Security Council of a resolution welcoming the cease-fire Turkey and Russia brokered in Syria was a diplomatic coup for Ankara and their efforts to end the crisis. The widespread coverage of the Turkish-Russian initiative also put Turkey back in the international spotlight as a regional power whose contributions could help end the bloody conflict. Having been sidelined for some time in attempts to end the Syrian war, Turkey now has the opportunity to return to center stage as a key regional player. This is not guaranteed, however, as there are hurdles that still must be overcome. Ankara seems nevertheless ready to exert more effort in doing so.

Despite the anti-Iranian mood in Turkey that peaked after the fall of Aleppo, Ankara is maintaining a close dialogue with Tehran on regional issues. Turkey has also decided to normalize its tense ties with Iraq. President Recep Tayyip Erdogan held a phone conversation Dec. 30 with Iraqi Prime Minister Haider al-Abadi, although the two were hurling abuses at each other not so long ago over differences involving Turkey’s military presence in Iraq. Prime Minister Binali Yildirim is planning to visit Baghdad in the coming days.

The success of Turkey’s new foreign policy orientation will depend in the first instance on the shape its current cooperation takes with Russia in Syria. If their cooperation produces results endorsed by the United Nations, then Ankara can look forward to a more decisive role in the region. The crucial question is whether Turkey is trying to move toward a balanced, multidimensional approach on foreign policy that requires cooperating with Russia, Iran and Iraq, in addition to having ties with the West or whether it is “changing sides” as a reaction to the West.

It is no secret that Erdogan sees ties with Russia as a way to counterbalance deteriorating ties with the United States and Europe and has even expressed a desire to join the Shanghai Cooperation Organization, led by Russia and China. The quandary for Turkey, however, is that Russian and Western positions on certain issues of great importance to Ankara in Syria are not that far apart, as for instance in regard to the People's Protection Units (YPG) and its political wing, the Democratic Union Party (PYD).

Turkey says the YPG and the PYD are terrorist groups linked to the Kurdistan Workers Party, but it has failed to convince the United States — which is cooperating militarily with the YPG against the Islamic State (IS) — and Russia. Notably, however, while Turkey openly expresses its anger at the United States and Europe for their refusal to see these Kurdish groups as terrorist organizations, it is silent about Russia’s ties with them.

Ankara remains determined to fight the YPG and prevent the PYD from establishing an autonomous Kurdish zone in northern Syria. There are indications, however, that in Syria it will focus its energy in the coming period on fighting IS. There seems to be a tacit understanding in Ankara that Russian and US support in Syria depends on the Turkish military only fighting IS and other terrorist groups.

Another quandary for Ankara is that relying on Russia in Syria may not in the end bring about the political results it desires, especially if the United States and Russia create room for cooperation during the Donald Trump administration. This could be why Ankara is not prepared to drift completely into the Russian fold, to the detriment of its ties with the West, regardless of the anger it feels toward the United States and Europe and its claims that they are aiding and abetting terrorism against Turkey.

Yildirim provided an example of this ambivalent position during an address to parliament Jan. 3. “[The United States] is openly giving arms to the YPG and PYD so that there can be more anarchy and terrorism in Turkey,” he angrily proclaimed, going on to reason that Washington was combating IS only with words, while Turkey was doing the hard work.

“We expect the new administration to end this disgraceful behavior,” Yildirim said, underlining that Ankara was being accusatory only toward the Barack Obama administration, which he called out, and not the incoming one.

Yalcin Akdogan, a Justice and Development Party (AKP) deputy and a former deputy prime minister, who also writes a column for the pro-government daily Star, acknowledged that the political and military ties between Turkey and the United States have always been important, despite current differences.

“We hope that President Trump will end this oddity and pursue policies that respect our longstanding alliance,” Akdogan wrote in his column. “What Turkey wants from the United States is not much, it just wants to see friendship from its friend.”

It was also telling that only two days before Yildirim blasted the Obama administration, Erdogan talked with Obama by phone. According to the readout of their conversation, Obama offered his condolences for the attack on the Reina nightclub in Istanbul, in which 39 people died. Obama also “welcomed Turkey’s ongoing efforts to work with regional actors to facilitate a nationwide cease-fire in Syria and a return to political negotiations between the Syrian regime and the opposition.” The readout noted that the sides agreed “on the need to continue and deepen coordination between the United States and Turkey.”

In the meantime, not everyone who supports Erdogan and the ruling AKP is happy with the move toward Russia. Akif Beki, a columnist for the daily Hurriyet who served as government press secretary while Erdogan was prime minister, has cautioned against veering toward Russia to the detriment of Turkey’s ties with the West.

Beki said Russia’s record on double standards is no better than the United States’ or the European Union’s and underlined Russia’s role in the destruction of Aleppo. He argued that no one could convince him that Russia would be a better ally than the EU. Beki also cautioned that after Trump takes power, his relationship with Putin could undermine Turkey’s efforts to counterbalance its tense ties with the United States should he develop closer ties with Moscow.

Ahmet Tasgetiren, an Islamist columnist for the Star, also cautioned about relying on Russia as a counterbalance to the West. “If it starts endangering Turkey’s interests in the future, will we feel the need to counterbalance Russia? If so, who will we do this with?” Tasgetiren recently wrote in his column. “In diplomacy, it is risky to place all of one’s eggs in a single basket.”

Turkey’s current cooperation with Russia may have put it back in the limelight, especially with regard to efforts aimed at resolving the Syrian crisis, but it appears that ties with Russia alone will not ensure that Turkey becomes the regional pace-setter it dreams of being. For that to happen, Ankara has to put more effort into increasing the number of friends it has and reducing its enemies, as Yildirim promised to do after he became prime minister in 2016. There are indications that Turkey may already have begun to do this.

It is nevertheless clear that unless Turkey improves ties with its natural allies in the West and maintains a delicate balance between the United States and Russia on regional issues, it will always end up hanging on the coattails of one superpower or the other.

by Murielle KASPRZAK and Joseph SCHMID | AFP | May 26, 2022
END_OF_DOCUMENT_TOKEN_TO_BE_REPLACED