Despite the Moscow Declaration, in which Russia, Turkey and Iran pledged joint efforts to end the war in Syria, the ongoing regional rivalry between Ankara and Tehran could lead to snags in the settlement process. 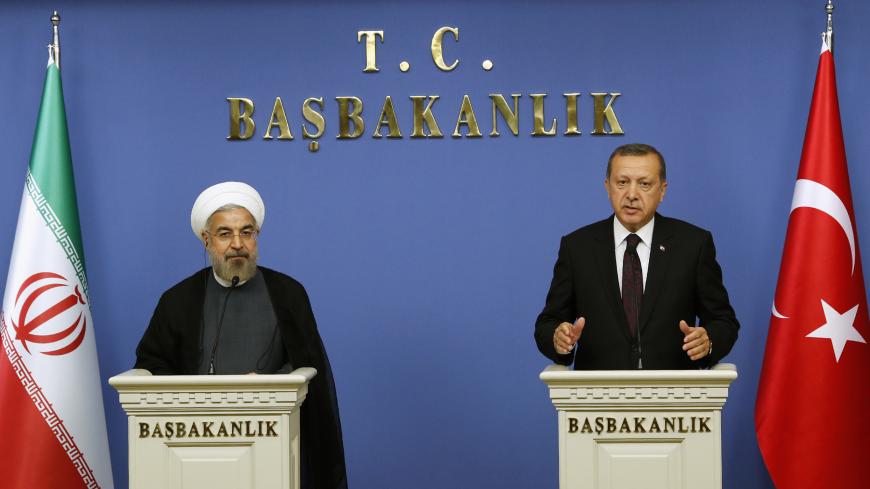 ANKARA, Turkey — In their eight-point Moscow Declaration of Dec. 20, Russia, Iran and Turkey asserted that their priority in Syria is a political solution and pledged joint efforts to that effect. For Turkey, the declaration amounted to relinquishing what it had advocated in Syria since 2011, including Ankara's refusal to recognize President Bashar al-Assad’s government and Turkish ambitions to topple it.

According to Erdogan Toprak, a senior lawmaker for Turkey’s main opposition Republican People’s Party (CHP), the Moscow Declaration “confirmed the bankruptcy” of the Syrian policy that President Recep Tayyip Erdogan and the ruling Justice and Development Party (AKP) had pursued.

In a Dec. 27 statement, Toprak said, “On the Syrian question, the government has come to the point that the [CHP] has advocated from the very beginning. The process has proven us right. Erdogan and the AKP government, who were eager to topple Assad in three months and perform Friday prayers at the Umayyad Mosque [in Damascus], had labeled us traitors when we sent a delegation to Damascus, expended efforts for a solution and criticized their Syrian policy.” Ankara, according to Toprak, has acquiesced to Russia's and Iran's strengthening their influence in the region, especially in Syria.

The regional rivalry between Turkey and Iran seems to be the “weakest link” in the Moscow troika. Standing on opposing sides in Syria and Iraq until last month, the two neighbors are involved in a power struggle not only in the Middle East but in the Caucasus and Central Asia as well. Thus, harmony and joint action in Syria might prove difficult for them. It’s safe to predict that Turkish-Iranian rivalry will cause troubles for the troika.

In this context, Iran’s absence from the latest cease-fire agreement in Syria is noteworthy. Iran and Turkey have waged their political and military struggles in the region largely along Shiite-Sunni sectarian lines. Seven jihadi groups, all of them Sunni Salafists, signed up for the cease-fire, which excludes the Islamic State (IS) and Jabhat al-Nusra. Iran, which backs Lebanon’s Hezbollah and other Shiite groups in Syria, Iraq and Yemen, did not officially join the deal and thus did not acknowledge the jihadi Sunni factions as interlocutors, seeking to safeguard its reputation and avoid any reactions from Shiite groups.

According to Ilhan Uzgel, the head of Ankara University’s International Relations Department, Turkey’s claim for regional leadership is “completely invalidated” at the current stage. Ankara, he believes, erred at the very beginning by making Assad’s departure the pivot of its Middle East policy, and then adopted “one of the most irrational approaches” in Turkish foreign policy by simultaneously defining Assad, IS and the Syrian Kurdish Democratic Union Party (PYD) as threats. According to Uzgel, settlement in Syria could hardly become possible without the United States.

As a result of its mistakes, Turkey today appears to have a weaker hand vis-a-vis Iran, and projects the image of President Vladimir Putin’s “good boy,” doing whatever Russia says. Iran, on the other hand, is acting with confidence, having enhanced its power and influence in regional equations.

Commenting on the summit between Erdogan, Putin and Iranian President Hassan Rouhani announced for Jan. 20 in Kazakhstan’s capital, Astana, analyst Kerim Has said in a series of Twitter posts that Russia was seeking “to balance Iran by pulling Turkey closer to itself.” Has, of the Ankara-based International Strategic Research Organization, said that Russia in 2017 will seek to build a strategic vision of what it calls “a great Eurasian partnership.” As part of the process, Iran could open its military bases to Russia while seeking to expand its spheres of influence to the Caucasus via Armenia, and to Central Asia via Turkmenistan and Tajikistan, he said.

Turkey aligned with Russia and Iran in the Moscow Declaration, but is taking steps backward in Syria and Iraq, and in the Middle East in general, while at the same time losing ground vis-a-vis Iran in the Caucasus and Central Asia.

Erdogan’s vitriolic insistence on Turkish military participation in the Mosul operation was repelled jointly by Iraq and Iran. In what appeared a veiled warning, Rouhani said in October that Iran viewed “as very dangerous [acts of] intervention by foreign countries without any coordination with the host country.” To these words, Erdogan remained silent.

Iraqi Prime Minister Haider al-Abadi, for his part, said, “We do not want war with Turkey. But if a confrontation happens we are ready for it.” Erdogan responded by telling Abadi to “know his place” and added, “You are not my interlocutor, you are not at my level, your quality is not at my level.”

The same Erdogan, however, broke with protocol and telephoned Abadi on the evening of Dec. 30. The fact that Abadi was contacted by the president and not by his Turkish counterpart signaled that Erdogan was taking steps back vis-a-vis Baghdad and its ally Iran, just as he did in Syria.

Ahead of the Astana summit, Erdogan is making efforts to bring allies on board against Iran. On Dec. 28, he said Saudi Arabia and Qatar — his “former allies” in Syria — should also attend the meeting.

Huseyin Bagci, the chair of the international relations department at Ankara’s Middle East Technical University, believes that inviting Qatar and the Saudis to Astana would “water down things.” In further comments to Al-Monitor, Bagci said, “The absence of the United States is an important drawback. We’ll see what happens by the time Donald Trump assumes the presidency. The Syrian government welcomed the Moscow Declaration but made it clear it does not trust Turkey. Iran is in Syria with its Islamic Revolutionary Guard Corps and is also behind Hezbollah. Turkey failed to get the Iranian-backed Hezbollah on the terrorist list [in Syria], and the same goes for the PYD. Yet, Jabhat al-Nusra, which Turkey is known to support despite the government’s denials, is on the terrorist list. There is the perception that Jabhat al-Nusra for Turkey is what Hezbollah is for Iran, which is not a good image for Turkey.”

Describing Putin as “a very good chess player,” Bagci said the Russian leader had brought Erdogan under control. “Putin drew Erdogan to his side and under his control. He is both empowering Erdogan and making him act in the way he wants,” he said. “With his decision regarding the Russian diplomats expelled by the United States, he simply finished off the Obama administration [and] extended an olive branch to Trump.”

The settlement route for Syria has shifted toward Moscow and Astana, but for the process to succeed, keeping the chain intact under the strain of Turkish-Iranian rivalry will be important.

In an interview with Russian television, Iranian Defense Minister Gen. Hossein Dehghan objected to Erdogan’s proposal for Astana, saying that Saudi Arabia should not be allowed to join the Syrian settlement process. And despite Ankara’s new alignment, he said Turkey’s military intervention in Syria without Damascus’ consent amounted to violation of Syrian territory, sending an important message of how Iran views Turkey.