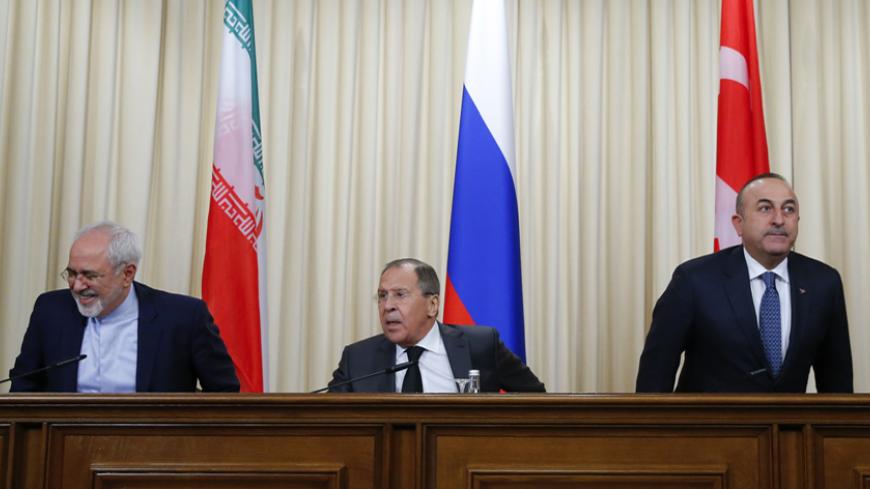 Hamidreza Azizi writes this week that Moscow’s Syria strategy includes helping “Iran and Turkey find common ground on the Syrian crisis and then [it can] concentrate its efforts on further proceeding with a political solution together with Turkey. As such, it could be argued that Iran’s current approach toward the Syrian issue is effectively pursued through the gates of Russia.”

Azizi adds that because “the nature of their [the Turkish-Iranian] relationship in Syria to date can best be characterized as a form of rivalry rather than enmity, points of disagreements could be addressed through the adoption of more pragmatism.”

Given the urgency of the humanitarian crisis, the Dec. 20 Russia-Iran-Turkey statement (“Moscow Declaration”) on Syria might be considered something of a diplomatic breakthrough. The very next day, the United Nations Security Council unanimously passed Resolution 2332 authorizing UN agencies to cross conflict lines to deliver humanitarian assistance. On Dec. 31, the Security Council unanimously endorsed the Russian-Turkish brokered cease-fire and diplomatic effort to jump-start the political process, including Syrian political negotiations in Astana, Kazakhstan, timed with the resumption of the UN-led Syrian talks. UN Syria envoy Staffan de Mistura said Jan. 5 that “any initiative such as this one, needs to be supported, and we hope it will succeed and is definitely welcomed.”

While assistance to Syrians cannot come quickly enough, and the latest cease-fire and political talks will face immense challenges, this column will simply note that these recent developments provide the type of diplomatic and humanitarian momentum that are essential to ending the war and achieving a political settlement.

At the core of the latest diplomatic flurry is Russia’s reconciling Iranian and Turkish differences over Syria. Azizi writes, “The primary Iranian concern in this regard is Ankara’s alleged links to Jabhat Fatah al-Sham [formerly Jabhat al-Nusra] and its apparent support of Ahrar al-Sham, another militant Salafi group. As was clear in both the Moscow Declaration and the Russia-Turkey cease-fire deal, Jabhat Fatah al-Sham and its affiliates are excluded from the cessation of hostilities while Ahrar al-Sham’s declared rejection of the accord effectively makes it a legitimate target. Hence, in practical terms, Ankara appears to have accepted what Iran has long been insisting on.”

Azizi adds, “Turkey has made other important concessions, given its adherence to two important Iranian red lines. These include Turkey’s refraining from insisting on [Syrian President Bashar al-] Assad’s removal as a precondition for peace talks and also Turkey's refraining from demanding that certain Iran-backed groups, particularly Lebanon’s Hezbollah movement, be listed as groups not allowed to be present in Syria. There was no formal reference to Hezbollah in the Moscow Declaration or the Dec. 31 Security Council resolution. Moreover, members of Assad’s government will take part in the upcoming talks in Kazakhstan.”

Finally, Aziz notes, “Although Iran still has concerns regarding Turkey's operation in northern Syria, it appears that as long as the operation is limited to fighting the Islamic State and also the Kurds in the area and does not include some new areas — particularly Raqqa — Iran could tolerate it. This is because Tehran and Ankara have a shared interest in preventing more Kurdish autonomy in the region, since it could potentially ignite sentiments among Kurdish communities within their own borders.”

Metin Gurcan adds that the Moscow Declaration “recognizes the territorial integrity of Syria and does not allow for the PYD's [Democratic Union Party’s] demand for autonomy in northern Syria. But by that same declaration, Ankara appears to recognize the sovereignty of Damascus, including in the north of the country. In other words, even if Turkey captures al-Bab from IS, it may have to hand it over to the Syrian government. Next is likely to be an imminent crisis over Manbij, which is still controlled by the US-supported Kurdish YPG [People's Protection Units], despite Turkey’s persistent demands for the Kurds to leave.”

In an exclusive interview with Massoud Hamed, Fawza al-Yusuf, a board member of the Democratic Federal System for Rojava-Northern Syria, said that the Syrian Democratic Forces, which are made up primarily of YPG fighters, will continue to combat Turkish influence in northern Syria. “The Turkish state and the militias it supports are working to threaten our areas, to in one way or another block our project of building a federation in northern Syria,” she said. “They are trying to occupy areas near the Kurdish region so they can constantly attack us and stop us from building a political entity that guarantees Kurdish rights. Unless we, as Kurds, respond by taking part in the liberation of Raqqa, the Turks and their mercenaries will occupy Raqqa. On top of that, they will turn it into a military base, posing a permanent threat to us, similar to the situation in southern Kurdistan [Iraqi Kurdistan] and the Bashiqa region today.”

Gurcan explains that Turkish President Recep Tayyip Erdogan’s priorities in Syria have tilted Ankara away from Washington and toward Moscow. “Any success or failure in foreign policy issues will be used for domestic consumption — Erdogan will now have two ideal scapegoats in case things do not go well at al-Bab: the United States and NATO. Erdogan will easily market a narrative of, ‘The United States has spoiled our goals at al-Bab,’ in case of a failure. That will allow him a gracious escape from domestic pressures.”

In contrast to Iran and Turkey, Saudi Arabia has been on the sidelines of the latest diplomatic blitz in Syria. Azizi concludes, “In contrast [to Turkey], if Saudi Arabia, for instance, was part of the nascent peace process, the reaching of an understanding could be almost impossible due to the severe ideological confrontation between Tehran and Riyadh. As such, seemingly aware of the latter, Russia appears to have for now limited the Syrian stage to just Iran and Turkey.”