As Turkey and Russia reach agreement on a comprehensive cease-fire in Syria, Turkish President Recep Tayyip Erdogan is accusing his Western partners in the anti-IS coalition of tacitly supporting the fanatical group. 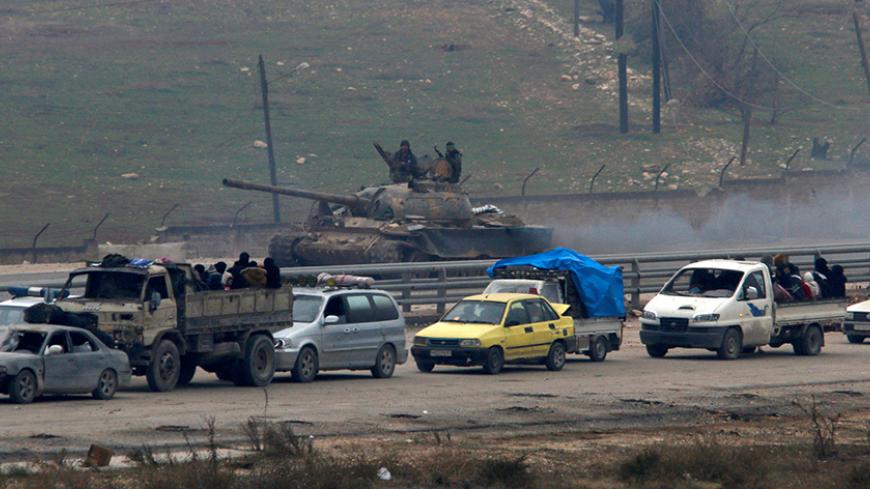 Forces loyal to Syria's President Bashar al-Assad sit on top of a tank to watch as a convoy of vehicles being used in the evacuation of the besieged rebel enclave of eastern Aleppo pass by, Aleppo province, Syria, Dec. 16, 2016. - REUTERS/Omar Sanadiki

Turkey and Russia have reached an agreement for a countrywide cease-fire plan to end the conflict in Syria, Turkish and international news outlets reported Dec. 28. The plan, which would come into effect at midnight Dec. 29, imposes a cessation of hostilities on the armed opposition as well as forces loyal to Syrian President Bashar al-Assad. According to Turkey’s semi-official Anadolu Agency, groups that both Ankara and Moscow consider terrorist — meaning Jabhat Fatah al-Sham (formerly known as Jabhat al-Nusra) and the Islamic State — will not be included in the cease-fire.

The Turkish-Russian agreement comes in the wake of a more limited deal between Ankara and Moscow that enabled the withdrawal of civilians trapped in the rebel-held districts in northwestern Syria's Aleppo. If the comprehensive cease-fire plan holds, the multilateral peace talks that are likely to be held in the Kazakh capital, Astana, next month will have a better chance of ending Syria’s tragic civil war.

To be sure, the cease-fire deal and the Astana talks may not resolve other outstanding issues between Turkey and Russia. As Al-Monitor's Fehim Tastekin wrote Dec. 26, it is unlikely for Russian President Vladimir Putin to accept a Turkish-backed opposition-held buffer zone in northern Syria. Russian Ambassador Andrei Karlov’s Dec. 19 murder in Ankara puts Ankara into a vulnerable position vis-a-vis Moscow.

The Turkish-Russian cease-fire deal almost eclipsed an equally sensational story. On Dec. 28, Turkish President Recep Tayyip Erdogan accused his Western partners in the anti-IS coalition of supporting the fanatical group along with the Syrian Kurdish Democratic Unity Party (PYD). Erdogan went so far as to claim that he had “evidence” that US-led coalition forces in Syria had given support to both IS and the PYD. Ankara considers the PYD an extension of the Kurdistan Workers Party (PKK), which has been fighting the Turkish government for independence and autonomy since 1984. Turkey, the United States and the European Union list the PKK as a terrorist group.

The American response was anything but low key. At the daily press briefing Dec. 27, US State Department’s deputy spokesman Mark Toner characterized Erdogan’s claims as “ludicrous" with "no basis for truth.” As can be expected, while pro-government media outlets in Turkey gave serious coverage to Erdogan’s claims, the leading opposition newspaper Cumhuriyet underscored Toner’s response.

Although the episode represents another rift between Turkey and its most important international partner, the United States, and though Russia backed Turkish claims, it is unlikely to lead to a breakdown in US-Turkish relations or a Turkish pivot toward Russia. After all, this is not the first time that Ankara and Washington publicly bickered over which side is at fault for the Syrian mess, the rise of IS and a host of other problems.