Erdogan accuses US, West of supporting terrorists in Syria

Turkish President Recep Tayyip Erdogan has accused some partners in the coalition fighting the Islamic State of arming the fanatical group as well as Syrian Kurds. 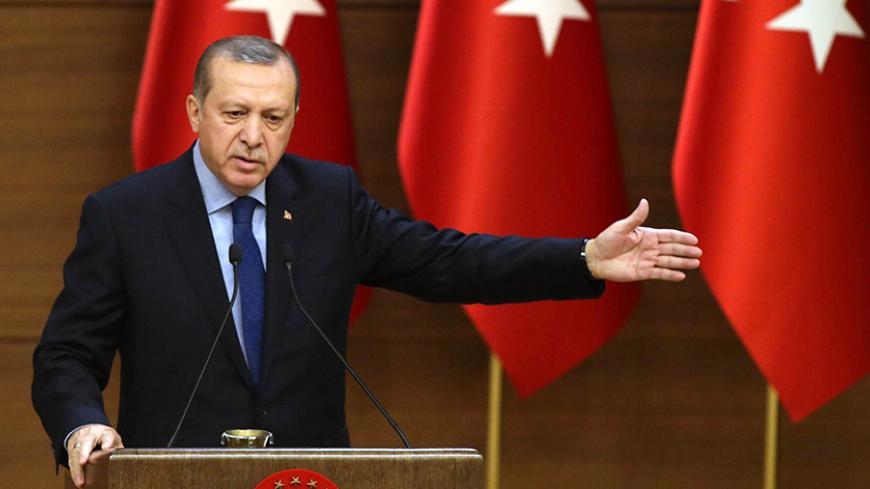 Turkish President Recep Tayyip Erdogan has repeated his accusation that Turkey’s Western allies — especially the United States — supported “terrorist groups” in Syria. Speaking at an award ceremony for the Scientific and Technological Research Council of Turkey on Dec. 29, Erdogan lashed out at past claims in the Western media that Ankara had supported the Islamic State. He said by not backing Turkey’s Operation Euphrates Shield (along with Ankara’s ally, the Free Syrian Army) in their efforts to capture the city of al-Bab from IS, the West was basically tipping the scales in favor of the fanatical group.

Erdogan then steered the conversation to a safer issue: US support for the Syrian Kurdish Democratic Union Party (PYD) and its armed wing, the People’s Protection Units (YPG). Since the rise of IS in 2014, the Barack Obama administration has cooperated with the PYD in Syria. In the run-up to the PYD’s operation at IS’ capital, Raqqa, the United States gave air support as well as logistical and intelligence backing to the PYD-led Syrian Democratic Forces. With Russia’s military intervention in Syria and Russian overtures to Kurdish groups fighting IS, Washington tried hard to keep its Syrian Kurdish partners happy.

But instead of Russia, Erdogan wagged his finger at the United States: “If you provide all sorts of weapons aid to terrorist organizations, then provide a cover for it and say ‘no we do not provide weapons, only ammunition,’ sorry, we won’t buy that.” Turkey considers the PYD an extension of the Kurdistan Workers Party (PKK), which has fought Ankara for independence and autonomy in southeast Turkey since 1984.

In a press statement Dec. 28, the US Embassy in Ankara denied the Turkish government’s allegations: “The United States government has not provided weapons or explosives to the YPG or the PKK — period.”

Turkish Foreign Minister Mevlut Cavusoglu elaborated on Erdogan’s position and kept the focus on the PYD. During a live TV interview Dec. 29, Cavusoglu said, “The coalition that includes America, for a while, has not provided air support to our Operation Euphrates Shield.” Turkey’s top diplomat also added, clearly in response to the US Embassy’s statement, “The United States of America is giving weapons to the YPG, PYD — period. … It is absolutely clear: The USA has given weapons to the YPG with the pretext of fighting [IS]. They know this well. We know this well. We have documents. Everyone around the world knows it. Thus, more than anything, we need to be honest. [If the Americans] are saying ‘we did give weapons so far; that was a mistake,’ that’s fine.”

During the live interview, Cavusoglu provided additional details on the impending agreement between Turkey and Russia for a comprehensive cease-fire in Syria. He said Ankara and Moscow plan on implementing the truce before the new year. According to Sabah, “Russia will act as the guarantor of the [Syrian] regime, while Turkey will act as a guarantor on behalf of the moderate opposition.”

Meanwhile, pro-government Yeni Safak quoted Cavusoglu as saying it is “out of the question” that Turkey will hold talks with Syrian President Bashar al-Assad. He added, “All foreign fighters in Syria, including Hezbollah, need to leave the country.”