Is Turkey wiping out Kurdish institutions during lengthy state of emergency?

Turkey is continuing is massive purge of suspects — many of them Kurds — in the July 15 coup attempt, dismissing thousands more civil servants in the past week. 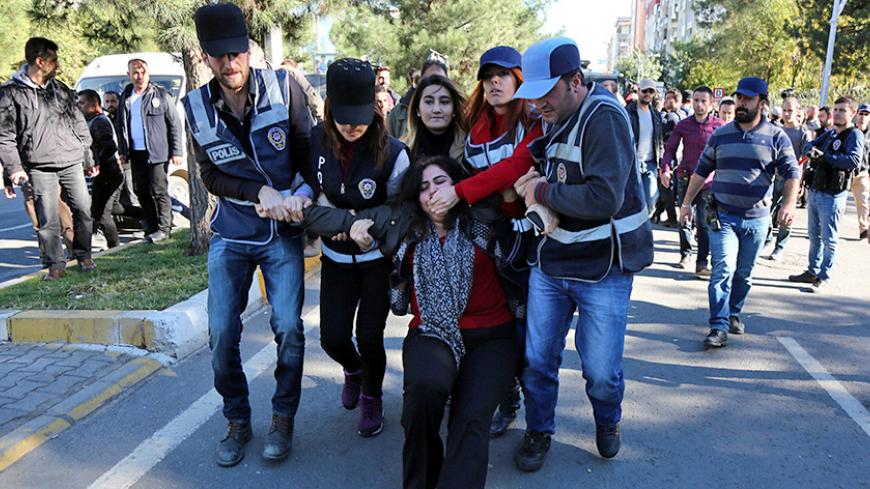 Some NGOs were accused of being affiliated with the Fethullah Gulen movement, which the government believes was behind the coup attempt, and others were closed because they were charged with being allied with the Kurdistan Workers Party (PKK), which Turkey considers a terrorist group. All NGOs that had “Free Citizen” in their names in cities with Kurdish populations were banned on charges of providing legitimacy to PKK sympathizers. Yet were all these NGOs actually close to the PKK?

The Kurdish Institute of Istanbul, a research NGO concerned with the Kurdish language and literature, attracted particular attention when it was closed down with the latest decree. It was set up in 1992 when one could not even mention "the Kurdish issue," let alone debate it. Its creation by leading intellectuals was disputed, but it was not closed. In 2000, President Suleyman Demirel officially invited the institute management to Europe Day observances. Institute staffers were eventually recognized as experts by the courts, and those who had certificates were allowed to work as court translators. Nevertheless, the institute was closed down on political grounds 25 years after its establishment.

“We don’t know the logic behind it. If you want violence to end in Turkey, then you must open the way for democratic institutions. We don’t have a political identity. Our work is known to all. Since 1992 we have been working on a dictionary, Kurdish literature research and Kurdish language. We publish a lot and organize conferences. We struggled to make Kurdish language used in education,” he told Al-Monitor. “This wasn’t a political struggle. We are dismayed by the situation of Turkey. With the 2013 [cease-fire] declaration, we were hoping that clashes would end, a solution would be reached in the process and democratic struggle would replace armed struggle. Sadly, it didn’t turn out that way.”

Tan thinks Turkey has reverted to the first years of the republic in the 1920s, when Kurdish existence was not acknowledged. Asked what is next, Tan said, “There are Kurdish departments in universities and a Kurdish channel on Turkey’s state television, TRT. They will probably close down those next.”

Those Kurdish departments are not closed yet, but an hour after Al-Monitor's conversation with Tan, six Kurdish academics at Mardin Artuklu University were dismissed under the state of emergency decree. They were known for their academic work, but none were politically active.

The offensive against Kurdish-managed institutions started toward the end of 2016 with the appointment of government trustees to run municipalities. Trustees were appointed to replace 54 mayors elected from the Kurdish Democratic Regions Party. Municipalities and NGOs working on Kurdish issues were marginalized one by one, and Kurdish organizations were paralyzed. What was the goal of this well-planned operation?

According to Mehmet Kaya, director of the Dicle Communal Research Center in Diyarbakir, it was to remove the Kurdish presence from the political arena.

“[The government's] going after NGOs would justify our communities resorting to violence in their struggle to reserve their rights. That is very dangerous. Of course, violence by the Kurdish side would legitimize a violent reaction from the state. The organization of Kurds was totally contrary to FETO," Kaya told Al-Monitor, referring to the so-called Fethullah Gulen Terror Organization, a term Ankara coined for Gulen followers. "FETO started in the political arena and moved toward militancy. Kurds, however, were trying to make the transition from violence to a civilian, nonviolent format.”

Kaya charged that there is a growing perception that the state has reverted to its previous stance of "rejection and denial" regarding Kurds. The ruling Justice and Development Party (AKP) "received many votes in the region because of its claim that the government was giving up the 'rejection and denial' policy on the Kurdish issue. That would mean accepting the Kurdish language and culture."

Some steps were actually taken in that direction, but the current measures taken against Kurdish cultural institutions and the people who work there marks "a serious reversal," Kaya said. "This is not combating terror, but preventing work on the language and identity of a minority. This will be perceived as an assimilation policy, which could be dangerous.”

According to Kaya, the gains the Kurds made over the years are now under an attack that won't succeed: “Turkey risks losing its [European Union] road map and is taking steps backward. Will Turkey go back to pre-AKP days? It will be distancing itself from Europe. There will be even more domestic polarization and an escalation of clashes. We know from experience that this policy did not succeed before, so why try again?” Kaya added.

Neither Turkey nor the PKK have the means to sustain their current policies, Kaya noted. Measures once dismissed as impossible are now easily implemented — and it's disturbing to think what the outcome might be.