The postponed local Palestinian elections might be scheduled in 2017 amid talks about possibly holding them in phases starting next May. 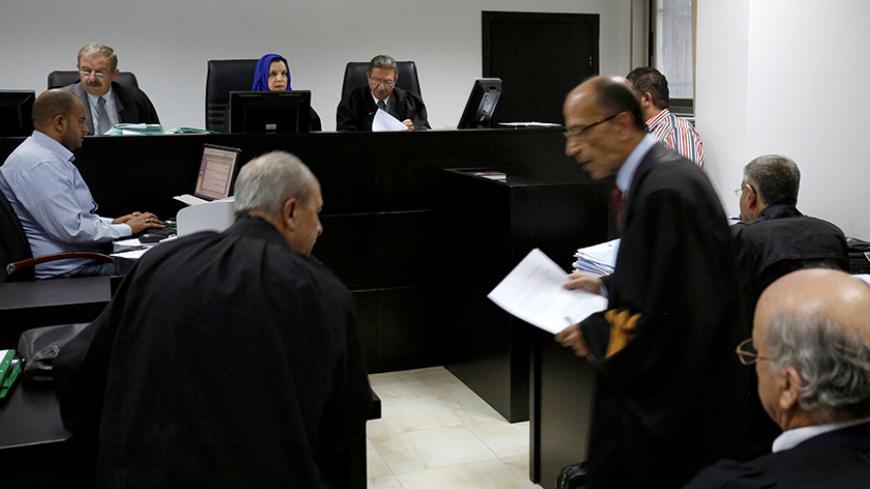 Palestinian judges discuss a petition to suspend municipal elections at the High Court in the West Bank city of Ramallah, Sept. 8, 2016. - REUTERS/Mohamad Torokman

Hisham Kuhail, the executive director of the Central Elections Commission, was quoted in the local al-Hayat al-Jadida newspaper Jan. 5 as saying the local elections will take place in the first half of 2017.

Kuhail’s statement came two days after Prime Minister Rami Hamdallah’s government announced that election complaints will now be resolved in a single higher court based in Ramallah, rather than local courts. According to the report on the decisions of the Jan. 3 Cabinet session published on the Palestinian Prime Ministry website, “The newly established court will resolve all election-related violations and appeals for disqualification of candidates.”

The centrally established court will take away the ability to disqualify candidates from the Court of First Instance both in Gaza and the West Bank. Disqualifying candidates was one of the main reasons for the Sept. 8 court postponement of the local elections that were scheduled for Oct. 8. Gaza-based courts had disqualified a number of pro-Fatah candidates based on weak evidence, according to legal experts. Appeals to the Ramallah-based Supreme Court led to the decision to postpone the elections.

Fawzi Barhoum, a Hamas spokesman in Gaza, said in a Jan. 3 press statement that his movement refuses the creation of a central court for local elections. “The court that is authorized to deal with cases involving local elections is the Court of First Instance, according to the local elections law No. 10 of 2005,” Barhoum said in a written statement posted on Hamas’ official website.

Mohammad Lahham, a member of Fatah’s Revolutionary Council, expressed to Al-Monitor his support for the need to hold local elections as soon as possible. “It is advisable to hold these elections soon because local councils are becoming calcified.”

Khaled Fahd Qawasmeh, a former minister of local affairs, also told Al-Monitor that holding elections soon is important. “There are a lot of challenges here in Hebron and they require tough decisions that only a newly elected council with a popular mandate can carry out,” Qawasmeh said.

Qawasmeh, the son of the popular late mayor of Hebron, Fahd Qawasmeh, who was deported by Israel in 1980, was planning to head a list of candidates to run in last October’s elections.

The possibility of holding local elections before achieving reconciliation with Hamas has some Palestinians worried that the elections might be doomed to failure or that they will be distorted. Hani Masri, the executive director of The Palestinian Center for Policy Research & Strategic Studies-Masarat, told Al-Monitor that conditions are not ripe for elections. “Local elections are necessary, but conditions for free and fair elections do not exist at the moment.”

Masri said that if local elections do take place, they will produce distorted results. “If they take place, the result will look like the recent Fatah congress. Candidates are likely to be pressured by Palestinians and Israelis who will press some not to run and others to run, and as a result, we will get distorted results that will not reflect popular sentiment.”

Local Palestinian councils have already passed their regular four-year terms. Municipal elections last took place in the West Bank in 2012 and in Gaza in 2005. While it is best to hold local elections in an atmosphere of national unity, it is unfair to the people of Gaza and the West Bank to continue denying them the right to choose their local governments. Internal bickering and disagreements between Hamas and the PLO might continue for years, judging by the rhetoric coming from their respective media outlets and their public pronouncements. The sooner that the local population has a chance to express themselves in the ballot box rather than in any other format, the sooner that unresolved local problems can be addressed by local leaders with a mandate from their constituencies.