More ultra-Orthodox Israelis are refusing to coordinate their visits to the Tomb of Joshua, in the West Bank Palestinian village of Kifl Hares, in what the Israel Defense Forces considers an onerous security risk. 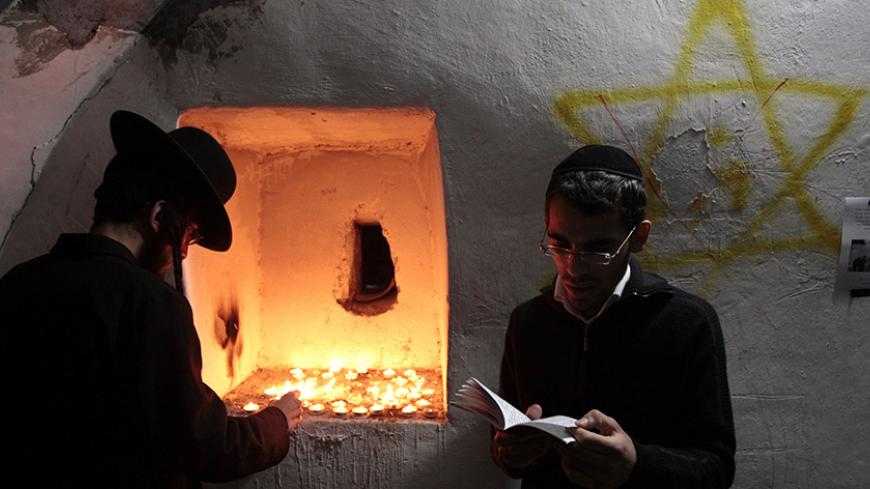 Ultra-Orthodox Jewish men pray at the Tomb of Joshua Ben Nun in the Arab village of Kifl Hares, near the Jewish settlement of Ariel, West Bank, Dec. 17, 2010. - REUTERS/Baz Ratner

Two cars made their way deep into the Palestinian village of Kifl Hares late on the night of Jan. 5. The 10 passengers wanted to visit the Tomb of Joshua, the traditional burial site of the Israelite leader who succeeded Moses. It was Joshua who began the conquest of Canaan and oversaw the Twelve Tribes’ settlement of the land. The pilgrims’ efforts to reach the tomb discreetly did not end well. They were besieged by local youths, who threw cement blocks at them. Luckily for them, IDF troops were able to extract them from the situation before they suffered any harm. The 10 men were handed over to the police, who arrested them on suspicion of engaging in behavior that could put public safety at risk and for interfering with a public official while performing his duty.

The group has since been released. A leader asking to be identified only by A.Y. told Al-Monitor his story:

“We arrived in the village at about 1 a.m. We parked our cars and entered the compound containing the tomb. Suddenly we heard rocks being thrown. We looked outside and saw that they were smashing the windshields of our cars. I said to my friends, ‘Let’s go outside and chase them away,’ because in other cases like this, we were able to do that. But this was the first time for some of the people I was with to ever visit the tomb. They were afraid. The Arabs didn’t dare enter [the complex], because the entryway is low and narrow. Anyone coming in would get smashed in the head," meaning that the group would have kicked them.

“Some people wanted to call the police, but I was against that. Based on past experience, I knew that we would be arrested, and it would be a big mess. Meanwhile, they started throwing cement blocks at the door too. I thought that we could escape without involving the police, but a few people decided to call anyway, getting us all in trouble. The police said that they would send the army, and that we should stay inside and not go out. It took the army 35 minutes to get there, even though it should only take 10 minutes.

“When the soldiers arrived, they threw stun grenades, took position across the area and extricated us in an armored convoy. Ten police jeeps were waiting for us outside the village. [The police] thought that we would run off on them, so they blocked all the possible routes. Instead, they took us to the lockup in Ariel police station and didn’t give us any food for 12 hours. We managed to smuggle in cell phones in our socks. That’s how we contacted our attorney.

“They took us to court the next day. Our lawyer, Hai Heber from the group Hanenu, argued that there was no problem with us entering the area, because it was in Area B, where access is allowed [to Israelis]. The judge accepted his argument, released us and reprimanded the police and the army for arresting us when they should have made an effort to arrest the rioters as well.”

As far as the security forces are concerned, the entry of Israelis deep into Palestinian territory is considered a life-threatening risk. It's also a headache for the Israel Defense Forces.

“We are doing everything to prevent these visits, but we don’t really know about all of them,” said Maj. Ilan Marendich, who is responsible for the sector. He said that as part of its effort to prevent Israelis from entering Palestinian territory without first coordinating with the military, the IDF organizes secure visits to the compound four times a year. “These visits are coordinated with the local village leader for a specific time on a specific date, so as to cause minimal harm to the fabric of village life," he explained.

Marendich considers the uncoordinated arrival of Israelis to the village in the middle of the night an unnecessary act of provocation against the Palestinian residents. “These visits frequently end with serious violence from the local villagers, forcing us to enter in armored vehicles to extract the civilians, while at the same time, we also have to deal with other incidents taking place concurrently in the village,” he said. “I believe that civilians who enter without first coordinating with the authorities are causing harm to their own safety and to security in general. We are worried about a shooting incident or the abduction of a civilian, which could cause the situation in the sector to escalate and result in loss of life. Instead of us dealing with security on the roads, we are dealing with criminals who took the law into their own hands.”

Netanel Snir, director of the “Joseph’s Tomb Authority” in Nablus, is responsible for coordinating such visits with the IDF. Nevertheless, he is in no rush to condemn uncoordinated visits to Palestinian territory. “The court ruled that it is allowed by law," he told Al-Monitor, "and I can certainly understand these people. This is a sacred historic site for the Jewish people. It is like saying that people can only visit the Western Wall twice a month. It’s ridiculous."

A.Y. said that he will continue to enter Palestinian territory in the future and that he is not at all afraid. “We’re not in any danger. For the most part, nothing happens,” he said. “Ninety percent of the villagers are good people who aren’t violent. The locals often invite us for coffee and treat us politely, because we really have no interest in getting into clashes with them.”

Asked why he insists on taking such risks when he could coordinate an organized and secure visit with the IDF, A.Y. answered, “We want to enter spontaneously. It is a sacred Jewish site. Why should it be a problem, especially when it isn’t dangerous?” He is not concerned about the economic costs of the visits, either. Since the car windows were broken in what was considered a hostile attack, he was reimbursed for the damages. “My car is worth 4,000 shekels [$1,000], and I got 12,000 shekels [$3,000].”

While Snir agrees that entering Palestinian villages without a security detail is dangerous, he sees an advantage to these uncoordinated visits. “Before Rachel’s Tomb in Bethlehem was opened permanently, people infiltrated the site illegally. These visits applied pressure on the authorities, so that now the compound is open year round. The situation today [in Kifl Hares] is hardly ideal. The army only lets us into the site between midnight and 4, like thieves in the night.”

He said that Israel must ensure the same kind of permanent access to the site as there is to Rachel’s Tomb and the Cave of the Patriarchs. “The political leadership doesn’t want a Jewish foothold there. They would be delighted if the whole phenomenon just disappeared, but we will continue to take action, so that more and more Jews visit the tombs of their forefathers,” he concluded.