'War of the shrines' stirs tension between Palestinians, Israelis

The fate of the West Bank’s holy sites is the subject of intense competition between Palestinian historical narratives and the theological discourse of the settlement movement. They are also key targets for settlement activities. 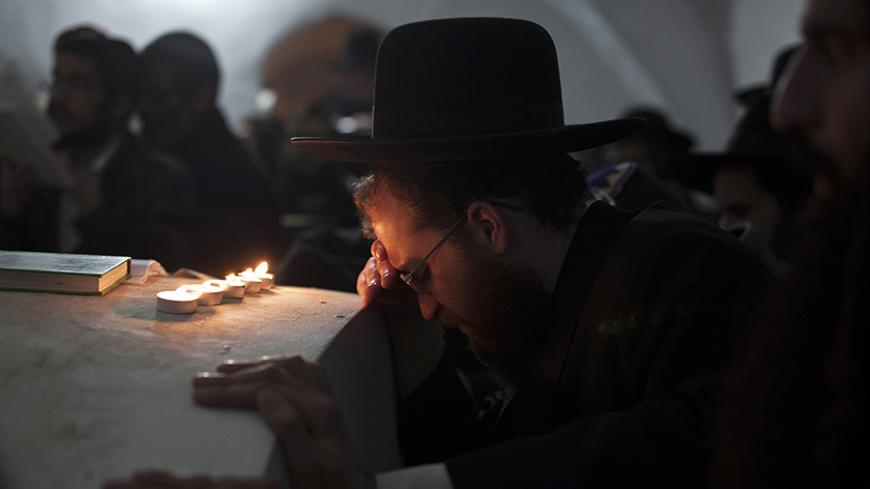 An ultra-Orthodox Jewish man prays next to candles in the Tomb of Caleb Ben Yefuneh in the West Bank village of Kifl Hares, Jan. 5, 2012. - REUTERS/Nir Elias

The phenomenon is not restricted to this village. The war of the shrines has pitted Israeli settlers against Palestinians since the occupation of the West Bank in 1967. The settlers have been trying to impose their control over them on religious grounds, using biblical stories to lay claim to them and the land surrounding them.

Kifl Hares has three shrines, which the settlers claim contain the grave of the biblical prophet Joshua. Every Jewish holiday or religious festival, they invade it for prayers and religious rites, the head of Salfit’s tourist board, Muntasir Moussa, told Al-Monitor.

He said that the three shrines do not date back to biblical times. For their part, local elders say leaders of a local family named Bouzit are actually buried there.

Moussa said Palestinians do not deny the presence of biblical prophets’ graves in the West Bank, but say many shrines have histories that are clearly not linked to that period.

Claims that shrines date back to the Jewish prophets have often been used as a pretext to take them over. During Jewish holidays, the Israeli army imposes a curfew in the area. In some cases, this has been followed by the shrine area being confiscated and new settlements being built nearby.

The Kifl Hares shrine sits in Area B, which is under joint Israeli-Palestinian Authority administration. The land the shrine occupies is owned by local families who are prevented from accessing it.

There are many examples of settlers taking over similar shrines on religious grounds. Perhaps the most important are the shrine of Prophet Yusuf in east Nablus, the Prophet Ilyas shrine in Deir Istya, the Sheikh Khater shrine and the grave of Bilal Bin Rabah in Bethlehem. Historically, these shrines mostly date from the Mamluk and Ayyubid periods.

Settlers constantly come to these shrines to pray. Clashes erupt between Palestinians and the Israeli army forces that accompany and protect the settlers.

Hamza Deiriya, an expert on Palestinian heritage, said many of the shrines were built during the Crusader period, which had prompted many locals to set up shrines and repair others as a response to the spread of Christianity.

“Local rulers and religious men took care of the sites as a way of encouraging locals to care for them too,” he told Al-Monitor.

During the Ayyubid and Mamluk periods, rulers built shrines and religious sites in an attempt to promote Islam among the local population and encourage them to defend their land. Most of these sites were places of worship, especially during the Fatimid era, and some were linked to the companions of the Prophet Muhammad who had fought in Palestine. Other shrines are linked to prophets mentioned in the Quran, while some were linked to the family and close companions of Muhammad as well as to local religious figures.

Deiriya, who is writing a book on the shrines, said religious interest in them faded under the British mandate, when they took on a political and nationalistic importance. Some, including the Prophet Moussa shrine, became focal points for rebellion against the mandate power.

Ahmed Rafik Awad, a lecturer in Torah studies at Al-Quds University in Jerusalem, said what is happening is an attempt to find an Israeli religious narrative around the Palestinian territories and to prove that the area has had an uninterrupted Jewish presence. This is done through the use of prominent figures in the Torah.

“Historically, there is absolutely no religious relationship between the shrines and the Torah or the stories of the Torah,” he said. “These places have their own historical stories, which in most cases date back to the Mamluk period, while the Torah was written before that, during the Babylonian exile.”

He said that Palestinians have no problem with any religion, but said the use of such narratives is often followed by the confiscation and settlement of the land around the shrines.

"We know very well the history of these shrines. Therefore, there should be a cultural and academic response to expose the historical reality of these places,” he added. “The battle will not be easy, as we are facing a theological settler movement that uses theology and religious narratives to take over land with the backing and protection of the Israeli army.”

While the settlers are targeting these sites, there has been no official Palestinian response on the ground or attempts to use them for the religious rites for which many of them were originally intended.