While the Israeli settlers stepped up their storming of Muslim shrines in Kifl Haris village in Salfit governorate, Palestinians perceive that such raids pave the way for the seizure of additional lands in the town. 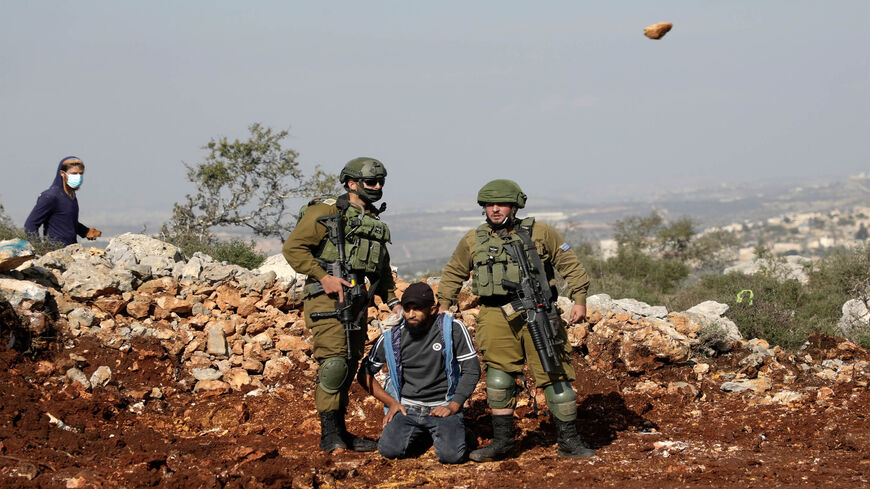 Israeli soldiers detain a Palestinian protester as an Israeli settler hurls rocks at Palestinians during a demonstration against the expansion of settlements in the town of Salfit, near the Israeli settlement of Ariel, West Bank, Nov. 30, 2020. - Jaafar Ashtiyeh/AFP via Getty Images

RAMALLAH, West Bank — On the evening of March 10, Israeli soldiers prevented Issam Abu Yaacoub, mayor of Kifl Haris, a village located in Salfit governorate in the northern West Bank, from accessing his village through the main street and demanded he take a bypass road because the settlers had raided the village.

Each time the settlers raid the village, the Israeli army imposes a total curfew and deploys a large number of soldiers and vehicles in preparation for the entry of settlers that lasts until dawn.

Kifl Haris has 4,500 residents and stretches over a surface area of ​​about 10,000 dunams (2,471 acres). It accommodates three prominent Muslim shrines, namely the shrine of Prophet Dhu al-Kifl, the shrine of Yusha ibn Nun and the shrine of Dhul-Nun (Prophet Jonah). The three shrines date back to the period of Salahuddin al-Ayoubi and are characterized by the Islamic architectural style of the domes and prayer niches.

Abu Yaacoub told Al-Monitor that the settlers, under the protection of the Israeli army, have raided the village for years; every time they do so, the soldiers are deployed in the streets and on the roofs of houses to protect the settlers.

He noted that during the most recent raid, on March 10, the settlers threw stones at houses as well as vehicles parked on the side of the roads. They also punctured car tires, broke water meters and damaged gravestones, overturned garbage containers in the streets and broke the memorial of Ibrahim Abu Yaqoub, a village resident who was killed by the Israeli army in July 2020 as he was walking with his friends at the entrance of the village.

Abu Yaacoub noted that an Israeli patrol is stationed every 20 meters (66 feet) along the 1-kilometer-long (0.6-mile) road stretching from the main entrance to the village up to the shrines. Such measures remain in place until dawn, he said, adding that settlers raid the village while dancing and screaming over their loudspeakers in the streets, preventing the residents from sleeping.

The shrine of Prophet Dhu al-Kifl is the most prominent one in the village. According to popular narratives, Kifl’s grave lies in the village that is named after him. The municipality’s director general, Abdel Rahim Omar, told Al-Monitor that Kifl's shrine consists of two adjacent rooms. The first is surrounded by a small yard and a door leading to the prophet’s gravestone, and the second consists of an Islamic architectural style dome serving as a prayer hall. There is an inscription on its door indicating that it was built in 1234, along with a Quranic verse, he added.

The shrine of Yusha ibn Nun, located in the center of the village, is the most visited by the settlers, according to Omar. He explained that the shrine is originally a Muslim shrine that was built during the Salahuddin al-Ayoubi period, and that the architectural style of its domes and prayer niches are proof of that.

Omar noted that historical information was engraved on an alabaster stone placed on the shrine, such as its construction date, as well as the Throne Verse. But, he said, a collaborator who spied for Israel stole the stone in the 1950s.

Montaser Moussa, director of the tourism and antiquities department in the Salfit governorate, told Al-Monitor that the settlers raid the Muslim shrines in the village under the pretext that the body of Joshua is found in a cave under the shrine of Yusha ibn Nun. They are using biblical stories to lay claims, he said.

He noted that those shrines date back to the Ayyubid dynasty, following Saladin's victory over the Crusaders and the liberation of Jerusalem. They were built for the celebration of victories, and performance of prayers and Sufi rituals.

Atef Youssef, assistant undersecretary of the Palestinian Ministry of Islamic Endowments, told Al-Monitor that the shrines' domes are built according to the Islamic architectural style and the prayer niches face toward Mecca.

Youssef added, “The Jews have nothing to do with these shrines. Their claims are false allegations.”

After Jerusalem, Salfit is the second governorate to be targeted the most by settlers in the West Bank, particularly in the village of Kifl Haris, where the Israeli authorities used a large portion of the southern part of its lands to build the Trans-Samaria Highway. They also placed a gate and a permanent watchtower at its main entrance, and expanded the Ariel settlement, which is one of the largest settlements in the West Bank, at the village’s expense.

The Palestinians believe that the settlers’ claims to the Muslim shrines in the village aim to confiscate more lands and annex them to other lands settlers already stole under various pretexts.