The site of Joseph’s Tomb in the environs of the West Bank city of Nablus again at the center of violence between Palestinians and Israelis. 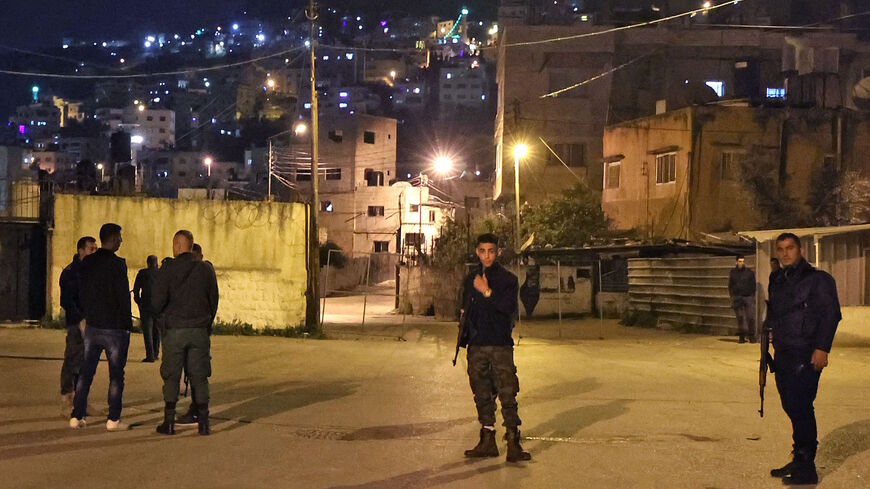 Members of the Palestinian Authority's security force deploy near the Jewish pilgrimage site of the Tomb of Joseph on the outskirts of Nablus in the occupied West Bank, early on April 11, 2022. - JAAFAR ASHTIYEH/AFP via Getty Images

Members of the Bratslav Hasidic sect said this evening that they plan to return to Joseph’s Tomb in the environs of the West Bank city of Nablus. The shrine has been a focal point of violent disputes for several years now, with more incidents taking place in the past two days. One unnamed Bratslav member told Israeli press, “We’re going back tonight. Everyone knows we are just going to pray at the tomb and leave. Tonight, we’ll go in too.”

Following the Tel Aviv terror attack on April 7, Israeli security forces had intensified their activities in the West Bank, including raids on some villages and arrests of people suspected of being affiliated with terror groups or individual assailants, mainly in the Jenin area. On April 9, on the backdrop of clashes between Palestinian gunmen and IDF soldiers in the environs, dozens of Palestinians went into the site of Joseph’s Tomb, smashing objects there and setting it ablaze. They were later dispersed by Palestinian security forces. Images on social media showed parts of the tomb inside the shrine smashed and charred.

Addressing the weekly Cabinet meeting yesterday, Prime Minister Naftali Bennett condemned yesterday the vandalism and arson of Joseph’s Tomb, saying, “During the night Palestinians destroyed Joseph’s Tomb. Dozens of Palestinian rioters in a campaign of destruction simply violated a holy place for us, the Jews. They broke the tombstone on the grave, set fire to rooms in the compound — I saw the pictures and was shocked. We will not abide such an assault on a place that is holy to us — on the eve of Passover — and we will get to the rioters. And of course, we will make sure to rebuild what they destroyed, as we always do.”

In a statement issued in Hebrew, English and Arabic, Defense Minister Benny Gantz said yesterday, “The vandalism of Joseph’s Tomb is a grave event and a serious violation of freedom of worship in one of the holiest places for every Jew. It violates the feelings of the entire Jewish nation, especially when it occurs during the Muslim holy month. The State of Israel will take action to ensure that the site will be refurbished and quickly returned to its original condition. In addition, we will take all the measures necessary to prevent such incidents. This morning, I have delivered a strong message to the Palestinian Authority, demanding the immediate reinforcement of their officials onsite and decisive action against rioters and terrorists that harm stability and security in holy places.”

Former Prime Minister and opposition head Benjamin Netanyahu said, “I strongly condemn the destruction of Joseph’s tomb tonight by Palestinians. This is a serious attack on an important and sacred place for the Jewish people on the eve of Passover. The place must be renovated immediately and peace and security must be restored.”

After the vandalism of the site, Bratslav Hassidim traveled in a convoy into the West Bank to the site, without asking for the required permission from the Israeli defense authorities. The vehicles forced their way through an unmanned barrier. While the convoy traveled on the main road leading to the shrine, not far from the Balata refugee camp, Palestinian gunmen in a car coming at the opposite direction opened fired at one of the cars, injuring its two passengers moderately. After the incident, the convoy reached another barrier of the Israel Defense Forces, which was manned. The soldiers treated the two wounded and transferred them to a hospital in Israel. Shortly after, Palestinian rioters entered the site again and vandalized it for a second time.

In the Oslo Accord, Israel and the Palestinians agreed for the tomb to remain under Israeli control as an enclave within an area under Palestinian control. Thus, Israeli-Jewish access to the site is limited and permitted only upon IDF authorization and with the organized escort of soldiers. Over the years, Jewish worshippers had entered Nablus illegally to pray at the tomb.

Several incidents occurred at the site over the years. The most serious one occurred in 2000 at the beginning of the second intifada. About 100 Palestinian rioters attacked the site and the soldiers with stones, Molotov cocktails and gunfire. One of the soldiers — Joseph Madhat — was critically wounded by a bullet. The Israeli forces decided not to open a battlefront and evacuate Madhat themselves, but instead waited for the Palestinian security forces to evacuate him. The Palestinian forces arrived only four hours later, but by then it was too late. The incident severely marked Israeli society.