Israeli Prime Minister Benjamin Netanyahu has long made use of "alternative facts" when dealing with settlement construction and building by Israeli Arabs and Palestinians. 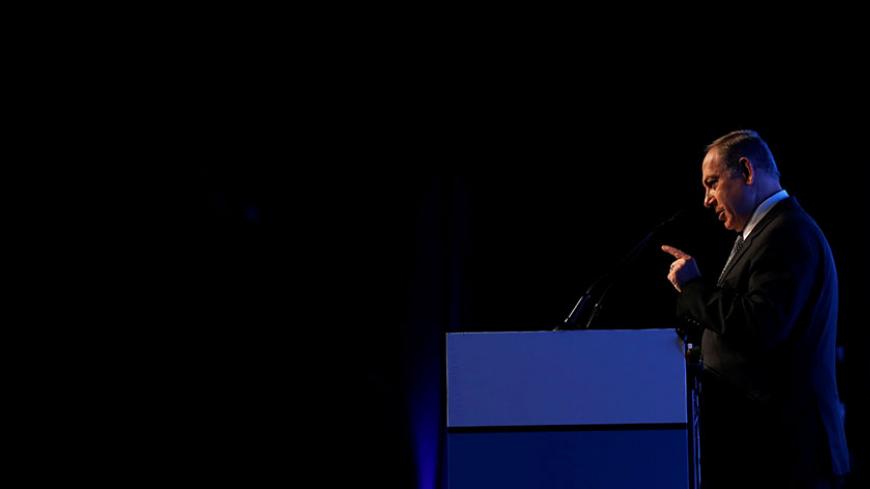 The brilliant newspeak term “alternative facts” that Kellyanne Conway coined in a Jan. 22 interview on NBC’s “Meet the Press” rocketed George Orwell’s classic dystopian novel “1984” to the top of Amazon’s best-seller list. What, after all, did US President Donald Trump’s counselor say? She found her own way, albeit strangely, to explain the gap between what White House Press Secretary Sean Spicer said regarding the number of people who attended her boss’ inauguration and the facts and photos of the event reported by the media.

In Israel, contradictions between media reports and versions of events told by those in power are routine stories: The same person says one thing and within a second says the exact opposite. That person is none other than the honorable Prime Minister Benjamin Netanyahu — the premier himself, not a spokesman or an adviser. Netanyahu not only lets loose alternative facts using mere words, he creates them even before the ink has dried on press releases issued by his office. Take, for example, his emotional Dec. 16 appeal to the squatters of the illegal Amona outpost in the West Bank.

“My heart is with you. We are living in a difficult time, for you, your families and the entire people of Israel,” the prime minister said, trying to ingratiate himself with the group of land thieves who constructed their outpost on private Palestinian land. To compensate the Jewish lords of the land for their distress, the prime minister promised them a handsome bonus, telling them that he had instructed that the demolition of all illegal housing be expedited in all parts of Israel.

“I am not willing for there to be discrimination in the enforcement of building laws between Israeli citizens, between Jews and Arabs, one person and another,” he said. “I will fight for there to be one law for all, and the same enforcement for all, something that has not been the case — until now — for decades.” A declaration is one thing, and a deed is another. The alternative facts soon followed. Netanyahu proved determined to exchange his “one law for all” pledge with one law for Jews and another for Arabs.

After brief consideration, the prime minister decided to bring the so-called Regularization law, legalizing unauthorized settlements, to the Knesset for final approval. That same law is designed to enable the expropriation of private Palestinian land and hand it over to Jews. The law paves the way for retroactively legalizing illegal construction of more than 2,000 housing units in Jewish settlements on Palestinian land in the part of the West Bank designated Area C, under full Israeli military and administrative control.

One law for all? Here is the alternative fact, or more simply — the truth — reported Dec. 27 by Haaretz: Based on data from the civil administration — the Israeli military unit charged with running civilian affairs in the occupied territories — only 53 of the 1,253 building permit requests in Area C submitted by Palestinians over the past three years were approved by Israel. These are not requests to build on private, stolen lands, but on “state lands.” Another fact: The number of Palestinian structures razed by Israel over that same period in Area C is 18 times greater than the number it granted permission to build.

What about the “same enforcement for all”? Here as well, the alternative fact was quick to follow: On Jan. 10, Israel demolished 11 illegally built homes in the Israeli Arab town of Qalansuwa. “I am not deterred by the criticism, and as I instructed, we are continuing to implement equal enforcement in Israel,” the prime minister boasted on his Facebook page. On Jan. 18, bulldozers were sent to destroy the homes of Bedouins in the Negev Desert village of Umm al-Hiran in southern Israel to make way for a Jewish neighborhood. During the operation, a local resident, Yakoub Moussa Abu al-Qian, drove his car into a group of police, killing one named Erez Levi. Public Security Minister Gilad Erdan was quick to announce the “fact” that Qian and his family were supporters of the Islamic State’s ideology.

How can one talk about one law for all when the state admits that the Amona settlers invaded other people's land, and remain there, whereas the residents of Qalansuwa built their homes on their own land, and the Bedouins settled on state lands decades ago? The same enforcement for all? In the case of Amona, lengthy negotiations were required to appease the squatters and to reach a compromise to their satisfaction. On the other hand, the Netanyahu government did not offer the Qalansuwa and Umm al-Hiran evacuees an iota of the compensation it offered the Jewish settlers.

How about a bit of “my heart is with you” for the evacuees of Qalansuwa and Umm al-Hiran? According to the alternative facts espoused by Netanyahu and his friends on the racist right, at best, Arabs fuel violence; at worst, they fuel fires. To them, the wave of wildfires that swept through Israel in November was “pyro-terrorism.”

How did Netanyahu explain that police found no evidence that the suspect arsonists had been motivated by nationalist sentiment? “The fact that you can’t prove it, doesn’t mean that it wasn’t so,” the prime minister declared at a Knesset plenary. “It’s still under investigation.” So from now on, it can be said that a person is guilty until proven innocent. Netanyahu ignores that such verdicts can be applied to him as well. For instance, we could say that even if the police fail to prove that Netanyahu is guilty of criminal offenses, it does not mean he never committed such offenses. That is still under investigation.

Netanyahu does not spare the public his alternative facts even on issues related to the Holocaust. On Jan. 17, he wrote on his Facebook page that Polish President Andrzej Duda, who visited Israel in mid January, had laid a stone from the Warsaw Ghetto on the tombstone of his brother, Yoni Netanyahu, who was killed in the 1976 Israeli raid to free hostages from Palestinian hijackers in Entebbe, Uganda. Several days later, Haaretz columnist Michael Handelzalts revealed that there are no stones available from the Warsaw Ghetto and that Duda had placed a stone from the Polish capital on the grave. As the late Ezer Weizman, Israel’s seventh president, told me years ago when he left the Likud Party to join the Israeli peace camp, “Our problem is that we left the ghetto, but the ghetto hasn’t left us.”