Israel's demolition of 11 homes in an Arab village has prompted its mayor to resign in only the first wave of outraged responses from the Arab-Israeli leadership, which has scheduled an emergency rally and is debating a mass resignation. 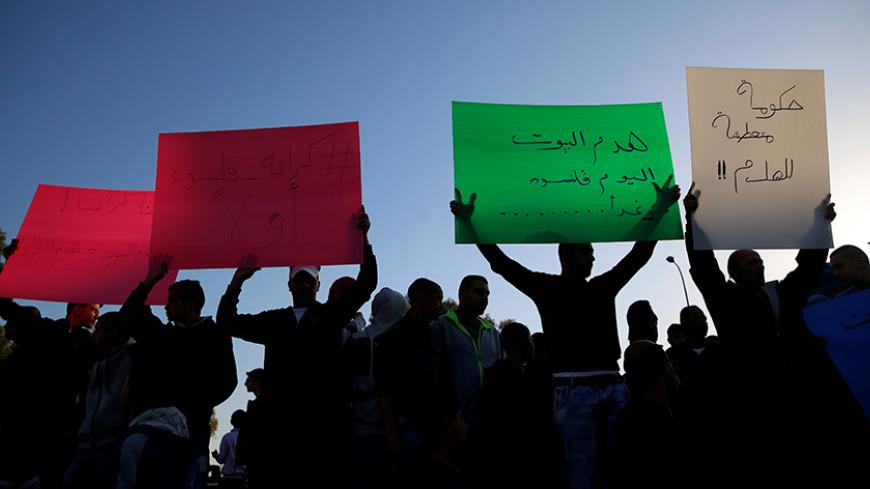 Arab-Israelis hold posters to protest the demolition of their houses by Israeli bulldozers in the northern Israeli city of Qalansuwa, Jan. 11, 2017. - REUTERS/Ammar Awad

Israeli authorities demolished 11 houses built without permits in the Arab village of Qalansuwa in central Israel Jan. 10. When the mayor of Qalansuwa, Abd al-Basit Salame, announced his resignation to protest the demolition, he had no idea that his move would set off a campaign of civil disobedience by other Arab mayors and council heads. An emergency rally of local Arab leaders and of the High Follow-up Committee for Arab Citizens of Israel is scheduled to be held Jan. 14 in the town of Arara. According to Salame, there are plans to announce a dramatic, united move against the Israeli government's decision to demolish houses in Arab communities simply to placate the Jewish settlers of the West Bank outpost of Amona, who are under court order to vacate their houses.

“I stood near the homes that were about to be razed,” Salame told Al-Monitor, “and I saw the bulldozers moving forward to flatten the houses. As a mayor who is supposed to defend and protect the residents, I felt as though I did not exist any more. The commander of the police force stopped me [from coming closer] and told me, ‘So what if you’re the mayor?’ What’s the point of having this position and status if I can’t protect my inhabitants? I saw a young man who is going to get married in a few months. He saved money over the years and took out many loans to build a house, and they came and destroyed it in a minute. The house is destroyed and he’s penniless. At that moment I told the police commander that I quit: ‘You and the prime minister can take over the running of the town, because I can no longer do it.’”

The demolition of houses built without permits in Arab communities throughout Israel began after Prime Minister Benjamin Netanyahu made a promise to the residents of Amona. In a video he taped on Dec. 16, Netanyahu told them, "The same law that necessitates Amona's evacuation necessitates the evacuation of illegal construction in other parts of our country," he said. "I have therefore ordered to expedite the demolition of illegal construction in the Negev, in Wadi Ara, the Galilee, the center — in all parts of the country — and we will do so in the coming days," Netanyahu said.

Salame rejects this equation. “I expected the prime minister to find solutions for us, to expand zoning plans [in the Arab sector], to greenlight construction plans. There are plans awaiting approval for years in the planning commissions. The minute you destroy a house, you’re destroying human beings. That’s why I thought that if all the local municipal and council heads step down, this could lead to a solution. We’re not wild about illegal construction, but give us an alternative. When I have a way to offer residents legal housing, I will tear down illegal buildings. There are now families of 10 or more people who are left without a roof over their heads,” he told Al-Monitor.

Salame said that in his three-year tenure he had held “marathon” meetings with the planning commissions, but not a single plan has been approved so far. His colleagues in other Arab communities also complain that planning for house construction in Arab towns and villages in Israel does not meet the housing needs there. And while construction for Arabs is not approved, construction in Jewish communities, especially in the West Bank settlements, gets government backing and encouragement.

For the residents of Amona, Netanyahu conducted countless meetings to explore creative solutions, but he offered no housing solutions for Arab citizens. Instead, he shared on Facebook a report from the website 0404 by radical right-wing activist Bentzi Gopstein, crowing over the demolition campaign in the Arab sector: “Our forces are destroying the homes of Arabs in Qalansuwa,” Gopstein wrote alongside a photo of the bulldozers. “I am not deterred by the criticism,” Netanyahu wrote, “and as I instructed, we’re continuing to carry out equal enforcement in Israel.”

Joint List Knesset member Ahmed Tibi was stunned by Netanyahu's post. "Bibi,” he tweeted, “you’re sharing that ‘our forces are operating’ against Arab citizens? Have you gone mad?”

At the upcoming rally, the Arab leaders and Knesset members from the Joint List will have to decide their response. The mayor of Qalansuwa has set a precedent and presented them with a challenge they cannot ignore. The umbrella organization of Arab councils has asked him to delay handing in his resignation letter to the minister of interior for a few days until after the rally, at which a proposal will be presented for all his colleagues to resign en masse in protest. Following Salame’s example is the only way, they believe, to shake things up, restore the trust of the Arab public in its elected leaders and especially redeem the dignity of the Arabs as equal citizens of the State of Israel.

“I am speaking from the heart. I am not a cynic and not an actor. I am a public servant,” said Salame. “I made my decision in a moment of anger and rage, but I don’t regret it. After I received tens of thousands of messages from Arabs and Jews who told me that I had taken a courageous step and they are proud of my resignation, I feel that as a leader I have issued a call of despair for everyone to follow in my footsteps. We have to lead a united protest by all the Arab public.”