Will Rafsanjani’s death bring about change in Iran’s regional policy?

Former President Ali Akbar Hashemi Rafsanjani once played a great role in improving Saudi-Iranian relations. But given the broader changes in Iran’s foreign policy approach, his death is unlikely to significantly impact the tense Tehran-Riyadh relationship. 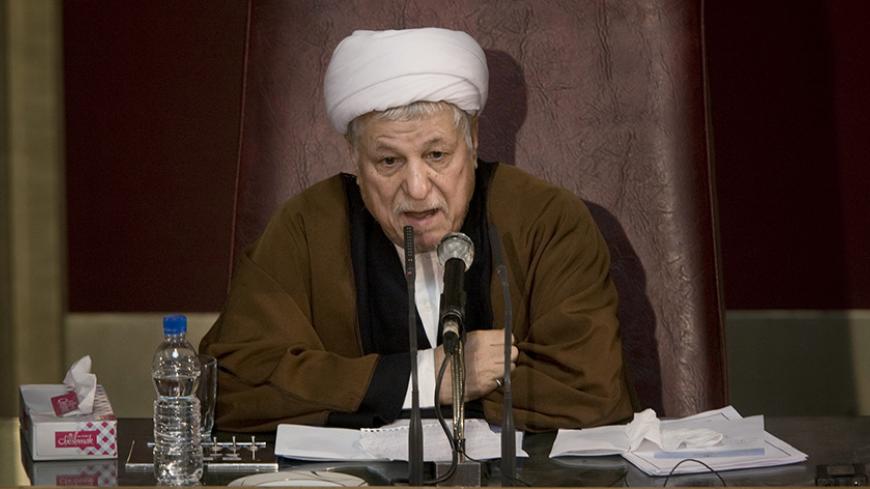 Ali Akbar Hashemi Rafsanjani, head of Iran's Assembly of Experts, speaks during the seventh session of the assembly in Tehran, Feb. 23, 2010. - REUTERS/Morteza Nikoubazl

Given that former president and Expediency Council Chairman Ayatollah Ali Akbar Hashemi Rafsanjani was one of the most influential politicians in Iran, and most importantly, one of the main supporters of President Hassan Rouhani, there have been many discussions about the impact of his death on Iranian politics. At the domestic level, the cornerstone of the debate is the future of Iranian moderate and Reformist forces after their loss of a reliable backer —especially ahead of the May presidential elections.

But this is not the only concern. The death of Rafsanjani has also sparked questions about the future path of Iran’s foreign policy, particularly in the Middle East. Rafsanjani commanded respect throughout the region, especially in many of the Persian Gulf Arab nations. This was apparent in the reactions of Arab leaders to his death, several of whom sent warm condolences and appreciated his positive role in improving relations between Iran and its neighbors. In fact, Rafsanjani’s positive reputation in the region developed under the years of his presidency (1989-1997), when he made great efforts to reach a detente with the Arab world, while playing an active role in addressing the problems facing Arab and Muslim countries. Furthermore, he was successful in bringing about what could be described as rapprochement with Saudi Arabia. Indeed, he always remained an advocate of Tehran-Riyadh cooperation to solve regional problems.

These considerations have caused some observers to speculate that Rafsanjani’s death could strike a further blow to Iran’s already deteriorated relations with some of its neighbors, especially Saudi Arabia. However, a deeper analysis of the core logic of such an argument makes it evident that it is based on a false analogy between two completely different eras.

When Rafsanjani became president in 1989, Iran was in a very bad state caused by eight years of war with Iraq. The devastation caused by Saddam Hussein’s invasion and its subsequent negative impact on Iran’s economy left the new president with no choice but to concentrate on the reconstruction and economic revival of the country. To achieve these objectives, it was necessary to have stable relations with neighboring countries, refrain from inflaming points of regional rivalry and adopt a more cooperative regional policy. This overall trend meant Iran had to devise a more inward policy agenda, with economic considerations at the very top.

The Iranian approach at that time proved to be functional, and Rafsanjani was named by his supporters as the “Hero of Reconstruction.” However, many things have since changed, and these changes are reflected in Iran’s current regional policies. Iran’s postwar economic revival directly impacted its level of influence and widened its scope of maneuvering in the region. In fact, even during Rafsanjani’s presidency, Iran maintained alliances with national and subnational actors, from the Syrian government to Lebanon’s Hezbollah and Hamas in Palestine. At the same time, the Islamic Republic found itself in an ever-more hostile environment. On the one hand, it became surrounded by the US military, especially after the US-led invasions of Afghanistan and Iraq. On the other hand, it faced Western-backed regional rivals who attempted to increase their regional influence at Iran’s expense. Furthermore, through the past decade or so, Iran was persistently facing Israeli threats of military attack over its disputed nuclear program.

On a theoretical level, realist-minded international relations scholars argue that the most important concern of all states is survival, and this primary concern drives them to maximize their security by attempting to increase their power. In a volatile region like the Middle East, which is greatly divided into lines of conflicting interests between both regional and transregional powers, the realist approach is particularly applicable. Realist logic posits that a state starts to define certain interests abroad when it increases its power, or in other words, it begins to widen the scope of its external influence. Hence, either in the form of shaping alliances or establishing so-called zones of influence, the overall broader trend seen in states with increasing power is the development of a more assertive foreign policy. In these circumstances, the core of a state’s foreign policy approach is well beyond the reach and impact of any one individual — or even an administration — and persists through time.

Looking at the Middle East today, it is clear that the level of influence that Iran enjoys is unprecedented in the past three decades. Iran’s cooperation with Russia, a transregional power, to save its ally Syrian President Bashar al-Assad has been quite successful, and Syria is now heading toward a political solution that, at the very least, observes Iran’s core interests. In Iraq, the collapse of Saddam Hussein’s regime by the US-led military coalition has been followed by the establishment of a Shiite-led government that has enjoyed close relations with Tehran for the past decade. In Lebanon, an extended crisis over the presidency was recently resolved in a way that has been widely interpreted as a victory for Iran over its main regional rival, Saudi Arabia. Furthermore, Yemen and Bahrain, two traditional zones of Saudi influence, are now seeing the rise of Shiite groups sympathetic to Iran. With such a change in regional equations compared with the 1990s, it will not be an easy task for a lone Iranian politician to singlehandedly improve relations with Saudi Arabia. If anything, given that Riyadh did not bother to send a condolence message over Rafsanjani’s death, it seems that Saudi Arabia is well aware of Iran’s current foreign policy approach and the new regional dynamics that drive it.

As such, while Rafsanjani played a great personal role in bringing about Arab-Iranian detente, the success of those efforts was due to the specific situation and priorities of postwar Iran. Given the very different domestic and international contexts Iran faces today, the relevance of Rafsanjani — whether in life or in death — in potentially forging a different Saudi-Iranian relationship should not be overstated.