Despite the nuclear deal between Iran and six world powers, it appears that an improvement in Saudi-Iranian relations in the short term is unlikely, if not impossible. 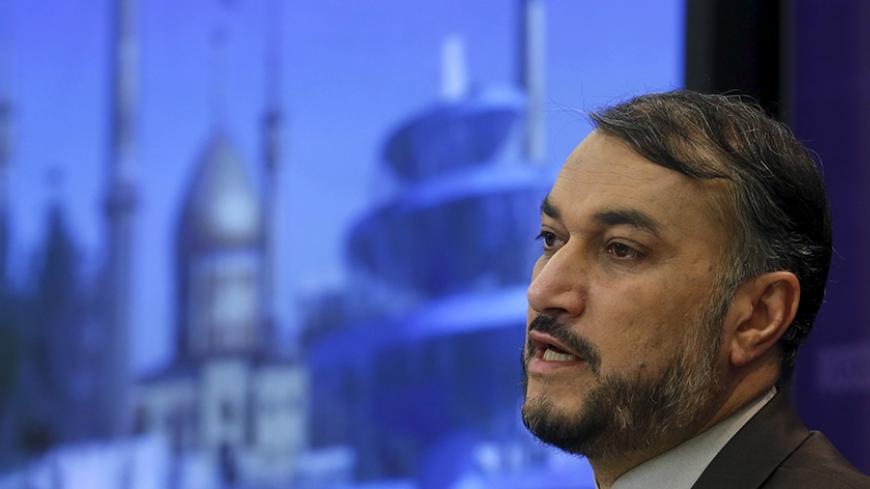 TEHRAN, Iran — The July 14 nuclear deal between Iran and six world powers has prompted speculation about change in Iranian relations with Arab states. Rumors of the deal influencing Iran’s regional policy were circulating even before the agreement was reached, especially among Arab research centers and media outlets. With the deal becoming a reality, this matter has turned into a hot topic again amid Iranian Foreign Minister Mohammad Javad Zarif’s string of regional tours as well as his initiative to jump-start dialogue between Iran and the Gulf Cooperation Council (GCC) — an initiative that Qatar is reported to be seriously pursuing.

Yet, despite Qatar’s reported stance, what is more important is Saudi Arabia’s reaction to Iran’s efforts and how it views the future of relations with Tehran.

Riyadh has advanced its war in Yemen into a ground offensive and increased its support for Syria’s opposition. Meanwhile, Saudi Arabia has not welcomed the nuclear deal — with the only exception being after King Salman bin Abdul-Aziz Al Saud's recent trip to Washington — and has shown reservations about Iran’s increased diplomatic maneuvering in the region, both at the official and nonofficial levels. In this vein, the question arises as to why a change in relations between Tehran and Riyadh is difficult, if not impossible, in the short term. Five key factors explain this dynamic.

First, maintenance of security is the one crucial and mutual expectation Iran and Saudi Arabia have of each other. At the national level, this means not provoking or supporting respective minorities and backing fringe movements. At the regional level, this translates into avoiding mobilization against respective regional allies or acting to counter the other side’s strategic options. Although Iran and Saudi Arabia have never engaged in any serious and direct measures against each other’s national security, the story has been different at the regional level. Both countries have taken, and continue to take, measures against each other’s strategic allies, as witnessed in Syria and Yemen. Saudi Arabia has extensively invested in the toppling of Syrian President Bashar al-Assad and weakening Lebanon’s Hezbollah movement. In response, Iran has increased its support for the Syrian government to unparalleled levels. Separately, in Yemen, Iran has supported Ansar Allah (Houthi) fighters as a popular movement, while Saudi Arabia has launched an air and ground offensive to seize power from them. The two nations’ rivalry has even spread to Iraq, Bahrain and Lebanon, thus escalating the atmosphere of insecurity. Therefore, under the current situation, the most important function of a bilateral relationship, namely maintaining security, does not seem to be working for either side. Furthermore, neither Tehran nor Riyadh harbors hope that improving bilateral relations will change this atmosphere of deteriorating security.

Second, both Iran and Saudi Arabia believe the Middle East is in a state of transition. Under these circumstances, a shift in mindsets that are currently based on the zero-sum approach is difficult. Indeed, the states that are experiencing transition themselves are effectively triggers for the prevailing zero-sum mindset. The only change the nuclear deal has achieved in this respect is that in the post-deal era, the Saudis are startled by the idea of Iranian diplomatic and geopolitical domination at the international level and its regional outcomes. In parallel, Tehran has shown that it cannot tolerate Riyadh’s actions in Yemen or its stepped-up efforts in Syria, and certainly cannot accept this within a win-win framework. Therefore, the nuclear deal has not improved relations but instead caused unprecedented provocation between Iran and Saudi Arabia.

Third, the old balance of security between Iran and Saudi Arabia is facing challenges, at least in light of the nuclear deal, which is particularly worrying to Riyadh. Without a security balance, there will be no political determination to alter the state of bilateral relations. This is because politics in the turbulent Middle East is dominated by security issues, as evident when reviewing the history of political relations between Iran and Saudi Arabia. History has shown that the meeting of security needs in terms of optics, perceptions and psychology is what has driven political determination to address differences. In fact, it was the provision of these needs that led to an improvement in Saudi-Iranian relations in the late 1990s and early 2000s.

The nuclear agreement has disrupted the long-standing security balance in the Middle East largely due to Tehran’s eased concerns about Washington using the military option. Therefore, Saudi Arabia, which has thus far tied its security to the United States and Washington’s hostile approach toward Iran, is feeling less secure — so much so that it has resorted to further increases in its purchase of arms. At the same time, Riyadh has also stepped up its hostile approach in Yemen and Syria, and demanded guarantees from Washington in regard to the nuclear deal.

Fourth, another major obstacle to change in Tehran-Riyadh relations is the differences in the priorities of each side in the post-deal era. Iran, which is now freed from the burden of its most challenging diplomatic file in its contemporary history, has placed the fight against terrorism on top of its regional political agenda. Zarif has engaged in active regional diplomacy in order to solve the crises in Yemen and Syria, and has even proposed the idea of talks between Iran and the GCC. In the meantime, Riyadh continues to see the fight against Iran as its main priority and thus — in addition to the war in Yemen — has stepped up its aid to Syria’s armed opposition, including movements that are on Iran’s hit list in the fight against terrorism.

The fifth and final obstacle to the improvement of bilateral relations is the mutual expectation of change in the post-deal era. On the one hand, Saudi Arabia has expressed hope that Iran will not pour the financial dividends of the nuclear deal into the Middle East and instead will allocate such funds to the development of its economy. On the other hand, both official and nonofficial Saudi figures have called for a change in Tehran’s strategic behavior in the region. Meanwhile, it seems that Iran, which has observed the Saudi reliance on Washington over the past decades, wants a change in Riyadh’s approach now that the West has halted its threats against Iran. Without a doubt, this mutual expectation of change has definitely turned into an obstacle for alleviating differences.

In sum, the combination of these five factors will likely prevent any short-term change in relations between Tehran and Riyadh. However, prospects seem brighter down the road. As military options for solving the major regional crises — crises that have pitted Tehran against Riyadh — reach a dead end, and as international efforts are pursued to resolve issues that have reached a stalemate, it is possible that Tehran and Riyadh can be pushed toward more serious engagement in the medium term. Indeed, this will be the case if the international community adopts a more balanced view aimed at engaging all regional players.