Iranian conservatives are maneuvering to shape the narrative of Rafsanjani’s political legacy in yet another attempt to subdue their Reformist and moderate rivals. 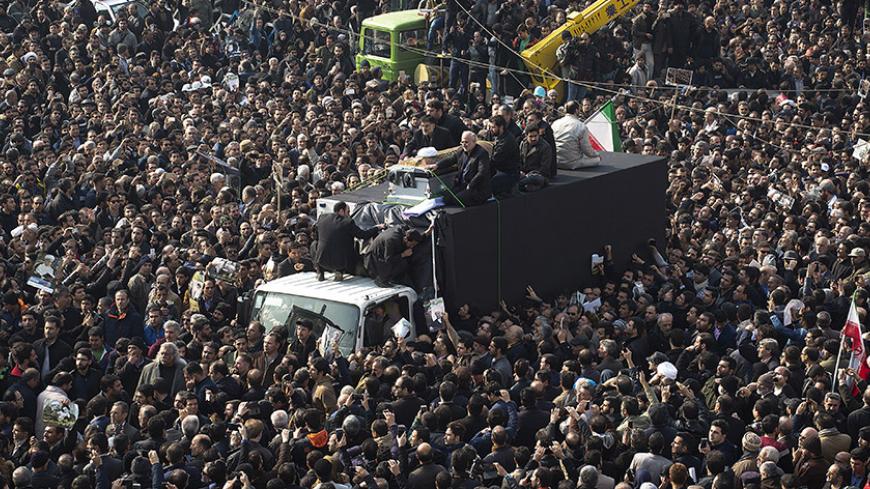 In death, Ayatollah Ali Akbar Hashemi Rafsanjani was able achieve something that had eluded him the last decade of his life: favorable coverage from Iran’s conservative and state-run media. Watching their effusive coverage of Rafsanjani’s funeral, one could easily forget that these outlets had spent the better part of the last decade committed to destroying the elder statesman’s political career. The editorial about-face, rather than being a result of a sensational media overcome with emotion over the death of a figure who played a central role in shaping the 37-year-old Islamic Republic, appears instead to have self-serving objectives — which does not bode well for Reformists and moderates hoping to ride Rafsanjani’s legacy and popularity to electoral victories.

In Iran’s political world, Rafsanjani’s four-decades-long political career has covered various, and even sometimes conflicting, identities: revolutionary activist cleric; right-hand man to the founder of the Islamic Republic of Iran, Ayatollah Ruhollah Khomeini; powerful executive tasked with post-war reconstruction; and finally, surrogate of the fledgling Reformists and moderates. Conservative media outlets, which are sometimes backed by powerful conservative politicians and security organizations, seem intent on posthumously tacking on one more role to Rafsanjani’s political legacy: that of a revolutionary committed to Khomeini, Supreme Leader Ayatollah Ali Khamenei and, ultimately, the Islamic Republic as it currently is.

For those who closely follow Iran, they would understand that in recent years Khamenei and Rafsanjani — sometimes referred to as the two pillars of the state — had disagreements about the direction of the Islamic Republic. Rafsanjani advocated better relations with the West, while Khamenei believes any drop in revolutionary fervor will lead to state collapse. Conservatives rallied around Khamenei’s message, while Reformists and moderates rallied around that of Rafsanjani. Yet if history is written by the victors, in the Islamic Republic of Iran, history will be written by those who live longer and are better financed. For conservatives and Khamenei, their history will take center stage when it comes to framing Rafsanjani’s life.

Rafsanjani’s true role in Iranian politics outweighed his official titles. He had political leeway to express controversial opinions due to his history within the political establishment. He would open up sensitive political discussions, giving the chance for Reformists and moderates to piggyback on those ideas without having to pay the political cost themselves. His comments in favor of a more open society and better relations with the West, such as his support for ending the "Death to America" chants, gave the space for Reformists to expound on these ideas with less risk of censure from conservatives.

Not only was Rafsanjani one of the key power brokers for the presidencies of Reformist Mohammad Khatami (1997-2005) and moderate Hassan Rouhani (2013-present), he was the biggest supporter of the nuclear deal between Iran and the six world powers, which was perhaps the most significant event in the Islamic Republic since the end of the Iran-Iraq War in 1988. At one particular telling moment, when Iran’s conservatives were in near panic over the deal and lashing out daily at the Rouhani administration, Rafsanjani redirected their anger by accusing them of being “one voice with [Israeli Prime Minister Benjamin] Netanyahu,” who also vehemently opposed the deal. The tactic worked. Rather than attacking the nuclear negotiators, conservatives turned their focus to Rafsanjani. The editor of the conservative Kayhan newspaper, Hossein Shariatmadari, was so incensed by the accusation that he wrote a column in which Rafsanjani was described as “no longer a pillar of the state.”

Yet, after his death, Kayhan seems to have forgotten the harsh column. It also seems to have forgotten the various accusations it made against Rafsanjani after the contested 2009 presidential elections, when Rafsanjani did not condemn the protests in his Tehran Friday prayer sermon July 17 but instead indirectly criticized the crackdown and urged reconciliation. In contrast, during his Friday prayer sermon on June 19 after that election, Khamenei warned that those who protest were responsible for the blood that is spilled. But in death, borrowing a line from Khamenei’s public letter of condolence, the headline of Kayhan newspaper’s top story referred to Rafsanjani simply as “the comrade of the supreme leader.” The headline also referred to those who came out for his funeral as “those who support the Guardianship of the Jurist,” a misleading reading of the millions of mourners on the streets of Tehran.

Kayhan was not alone in its editorial U-turn. A number of newspapers linked to conservative politicians or the Islamic Revolutionary Guards Corps suddenly dropped all of their previous harsh criticisms. An article in Vatan-e Emrooz praised the first two decades of Rafsanjani’s political life in the Islamic Republic and vaguely referred to “differences” in the last two decades. Iran’s state television, the Islamic Republic of Iran Broadcasting (IRIB), whose director is appointed by Khamenei, was so excessive in its coverage of Rafsanjani’s funeral that some questioned why it hardly had any favorable coverage of Rafsanjani in the years before his death. Even hard-line Raja News accused the IRIB of “distorting history” in its attempts to gloss over key parts of Rafsanjani’s political stances, especially with respect to the 2009 presidential elections.

The reframing by conservatives undoubtedly is intentional. It is an effort to bring Rafsanjani’s legacy into the fold, to once again rebrand him as a pillar of the state, and most importantly, one in the vision of Iran’s conservatives. Rather than the untouchable statesmen who pushed the envelope on sensitive political topics, conservatives will rebrand him as a revolutionary who got in line behind the supreme leader. This reframing will rob Reformists of the opportunity of using Rafsanjani’s numerous public statements to push their political agendas. It will also seek to demand that Reformists and moderates get in line behind both Khamenei and the conservatives who claim to speak on the supreme leader’s behalf. Reformist and moderate media, who often are at the mercy of conservative forces in the security establishment and the judiciary, will have a difficult time pushing back against this narrative. Rather than using Rafsanjani’s political legacy to their advantage, they are likely to waste considerable resources on the defensive, pushing back against the legacy presented by conservatives.