Amid the ongoing debate between Hamas and the Palestinian Authority over administration of Gaza, Palestinians' hardships continue. 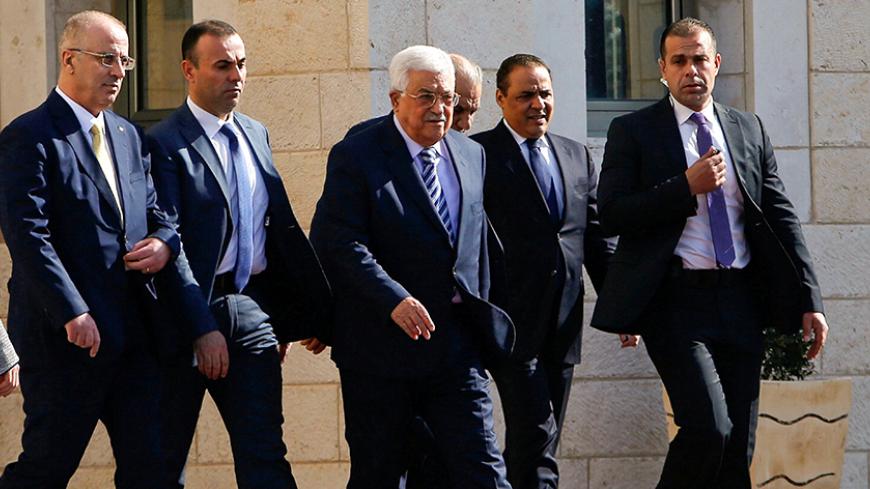 Rival Palestinian political parties Hamas and Fatah say they want the same thing — in theory. They agree they are in agreement, then proceed to disagree. Meanwhile, Palestinians suffer.

Thousands of people protested Jan. 12 in the Gaza Strip over severe electricity shortages. For months, Gazans have been living through successive crises as Hamas and the Fatah-led Palestinian government of Mahmoud Abbas have traded accusations.

The government accuses Hamas, which controls Gaza Electricity Distribution Co., of preventing the government from performing its duties to end the crisis. In exchange, Hamas charges that Abbas is obstructing its efforts to resolve the problem.

One of the results of the ever-worsening situation in Gaza is Prime Minister Rami Hamdallah’s demand Jan. 16 that Hamas hand over all governmental administrative and service bodies in the Gaza Strip, not just the electric company, to the Palestinian government.

Al-Monitor attended a Hamas press conference that day held in Gaza. Hamas spokesman and former Minister of Awqaf (Religious Endowments) Ismail Radwan said the movement is ready to hand over governmental services and ministries in Gaza to the Palestinian government on the condition that the government commit to carrying out its duties to Gaza. He said the government has not been serious about ending Gaza's problems.

Fawzi Barhoum, also a Hamas spokesman, subsequently told Al-Monitor, “Hamdallah's demand … is a new attempt from him to evade his governmental responsibilities toward the Palestinian people in the Gaza Strip. His government has abandoned Gaza and its people since the first day of its formation in June 2014. Since we declared on Jan. 16 our full readiness to hand over all ministries in the Gaza Strip, we have heard no official positive response from the government in Ramallah [the West Bank], which suggests that the government is not serious.”

Perhaps Hamas should ask a number of questions: How can the handover take place before achieving societal reconciliation between Palestinians, especially reaching a settlement regarding the split in 2007 between Fatah and Hamas, which resulted in dozens of dead and hundreds of wounded. What will the relationship be like between the government and the well-armed resistance? What will Gaza's future look like?

Speaking on condition of anonymity, a Palestinian political official close to Abbas told Al-Monitor, “Gaza remains under Hamas’ control, politically, administratively and security-wise. It is true that the [Hamas] government resigned as part of the 2014 reconciliation agreement, but [Hamas] still has a shadow government made up of deputy ministers who control the actual decision-making for all administrative, livelihood and security matters in Gaza. This means that the legitimate government based in Ramallah and headed by Hamdallah has no actual physical presence [in Gaza].”

A disagreement emerged within the Palestinian Authority (PA) with regard to Hamas handing over Gaza. On Jan. 22, Fatah Central Committee member Azzam al-Ahmad told Felesteen newspaper, which is close to Hamas, “Reconciling with Hamas means reaching an understanding and an agreement, not surrender and recognition. There is no such thing called 'handing over Gaza.' We are one country. Hamas is part of the Palestinian national fabric.”

But Brig. Gen. Tawfik al-Tirawi, a Fatah Central Committee member and former head of General Intelligence, had said just the day before that there will be no reconciliation with Hamas before it transfers control of the Gaza Strip to the PA.

Hazem Kassem of Hamas told Al-Monitor, “In 2014, Hamas ceded its constitutional right to lead the government in order to end the division, and [Hamas] has always called on the consensus government to take over the Strip, but the latter neglected Gaza's needs. [The government’s current] demand … is a way to evade its responsibilities and is not a serious demand. Hamas fears that the government's demand is aimed at removing Hamas from the Palestinian political system, which Hamas entered via legitimate elections and via the legitimacy of the resistance.”

He added, “If the government thinks that its taking over Gaza is a step toward disarming the resistance, then we will not allow that to happen.”

Salah Bardawil, a Hamas member of the Palestinian Legislative Council, said Hamdallah's demand that Hamas hand over Gaza is politically motivated and Hamas condemns it. Palestinian government Minister of Housing Moufid al-Hasayneh said Jan. 20 that the PA is ready to take over Gaza.

Ghassan al-Khatib, Palestinian planning minister and former director of the government media office in Ramallah, told Al-Monitor, “Hamas has been making a mistake by keeping control of Gaza since 2007 and bearing the burden of the livelihood responsibilities despite the prohibitive financial cost, because [Hamas] is besieged externally and its financial situation is not good. Hamas' fear that handing over Gaza to the PA would be a step toward disarmament is an unacceptable excuse. Even though they want to, President Abbas and Prime Minister Hamdallah don't have the ability to disarm the group, which has a huge military arsenal in Gaza.”

“Hamas genuinely and seriously fears that agreeing to hand over Gaza to the PA would be a preliminary step for disarmament,” Raed Enairat, head of the Contemporary Center for Studies and Policy Analysis in the West Bank, told Al-Monitor. “This is making Hamas unenthusiastic about approving the handover to the PA.”

But the former minister of nongovernmental organizations in Ramallah, Hassan Asfour, said Jan. 21 that Hamas is exercising a separatist policy in Gaza and acting as an independent entity despite saying that it is ready to relinquish administration of the Strip. He said Hamas does not intend to give up its status as an independent entity in Gaza and seeks a de facto separation of Gaza from the West Bank, politically and legally.

Amid the ongoing debate between Hamas and the PA on the Gaza handover, the Palestinians’ suffering goes on. The political demands are not translating into action. This means conditions will remain poor as Hamas and the PA continue to score political points against each other.