Backers of Palestinian President Mahmoud Abbas say the ongoing Palestinian division will only weaken efforts to defy the US peace plan, which is expected to be announced soon. 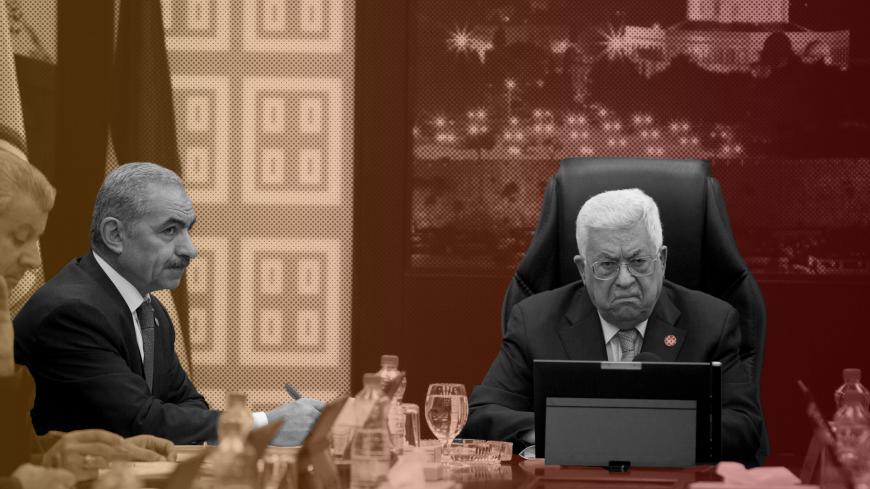 RAMALLAH, West Bank — The reconciliation standoff between rival Palestinian factions Fatah and Hamas is creating divisions over how to defy the Mideast peace proposal expected soon from US President Donald Trump's administration. Each faction claims to oppose the plan while accusing the other of supporting it, even though it hasn't been officially unveiled yet.

The plan is expected to strongly favor Israel.

White House senior adviser and Trump son-in-law Jared Kushner said April 23 during a Time magazine forum in New York that the administration will announce the so-called "deal of the century" sometime after the Muslim holy month of Ramadan ends in early June.

Meanwhile, the Palestinian rift is widening with the ongoing deadlock. Salah al-Bardawil, the Hamas leader in the Gaza Strip, told Arabi 21 news recently that Hamas is forming a "supreme body" to negotiate with other Palestinian factions, which he didn't name, about how to counter the US proposal.

Fatah then attacked Hamas in the media, saying it fears the new body might become the core of a rival body parallel to the Palestinian Liberation Organization. Jamal Muheisen, a member of the Fatah Central Committee, told the official Voice of Palestine radio April 24 that the Hamas announcement “is a step showing Hamas’ agreement to the deal rather than its refusal of it."

According to Muheisen, the only way for Palestinians to handle the US proposal is to unite behind the Palestinian Authority, headed by President Mahmoud Abbas and his Fatah party: "Whoever wants to face the deal of the century must back the legitimate leadership that objects to the deal and dismisses it.”

Majed al-Fetiani, secretary of the Fatah Revolutionary Council, told Al-Monitor, “The Palestinian leadership, which Abbas heads, is the one fighting the deal. ... If Hamas is serious in defying the deal ... it should announce the end of its rule in Gaza and tell Abbas it stands with him.”

Hamas leaders made similar statements attacking Abbas during the Palestinian Legislative Council session in Gaza on April 24. Hamas deputy leader Khalil al-Hayya said Abbas "and his team insist on distracting the nation by focusing on problems that shift attention away from attempts to eliminate the Palestinian cause, instead of heading toward national unity based on partnership and respect for signed agreements.”

The escalation between the two parties comes amid stagnation in the Palestinian reconciliation. Egypt is sponsoring the process, as well as one between Hamas and Israel.

A delegation including Fatah Central Committee members Azzam al-Ahmad and Rouhi Fotouh visited Cairo on April 17. In April 20 statements to Voice of Palestine, Ahmad said his delegation communicated to Egyptian intelligence the PA's concerns about some provisions of the on-again, off-again truce between Hamas and Israel. Fatah especially pointed to provisions related to “irregular money flow to Gaza,” in reference to Israel allowing entry of Qatari funds to Hamas to pay the salaries of public employees.

Speaking about Fatah's trip to Cairo last month, Abdullah Abdullah, a member of the Revolutionary Council, told Al-Monitor, “The Fatah delegation gave Egyptians a message stating that if Hamas is honest about defying the deal of the century, then it should join the PLO in these same endeavors to form a solid front.”

Fatah, he said, wants to implement an agreement from October 2017 under which the PA was to take control of the Gaza Strip and remove at least some of the crushing restrictions on Gazans. The ill-fated agreement never got off the ground. Abdullah also said the new Palestinian government — which excludes Hamas — should organize legislative elections to form a multifactional national unity government.

The Lebanese newspaper Al-Akhbar on April 18 cited a source close to Palestinian Prime Minister Mohammad Shtayyeh as saying Abbas wants “a draft agreement with Hamas regarding the requirements of the next stage and confirmation about the unity of power in the West Bank and the Gaza Strip, in addition to a political program in line with that of the PLO.”

The source added, "[Abbas] wants reassurance from Hamas that it will not accept any arrangements that the PA does not approve of in Gaza. Meanwhile, the PA insists on a role for Shtayyeh’s government in Gaza.”

However, Hamas spokesman Fawzi Barhoum said at an April 20 press conference in Gaza, “Fatah’s claims about the reconciliation and about presenting propositions are just propaganda and stalling attempts. The aim is to cover up the divisive moves of Fatah and [Abbas] and his retaliatory measures against Gaza’s people.”

Ahmad Jamil Azem, a professor of international studies and political science at Birzeit University, told Al-Monitor that Trump actually began implementing his plan for the Middle East a year ago by declaring Jerusalem as Israel’s capital and halting US funding to the UN Relief and Works Agency for Palestine Refugees. What will be announced later are additional steps to the plan, he said.

According to Azem, Palestinians could defy the deal if they united and led a popular resistance, but there are no reconciliation prospects.

“Fatah has no clear vision about the way to deal with Gaza now or in the future. Meanwhile, some Hamas parties don't want reconciliation at whatever cost. For reconciliation to happen, an important regional or international mediator is needed to pressure both sides — as Egypt’s role isn't enough to pressure Hamas and Israel," he said.

"The US and Israel want to manage the crisis in Gaza rather than solve it, by reaching understandings between Hamas and Israel to ease the humanitarian crisis in the Gaza Strip and offer some aid, rather than end the blockade [by Israel] completely.”