An Egyptian delegation has recently stepped up efforts to bring Fatah and Hamas closer, proposing a time line to advance rapprochement. 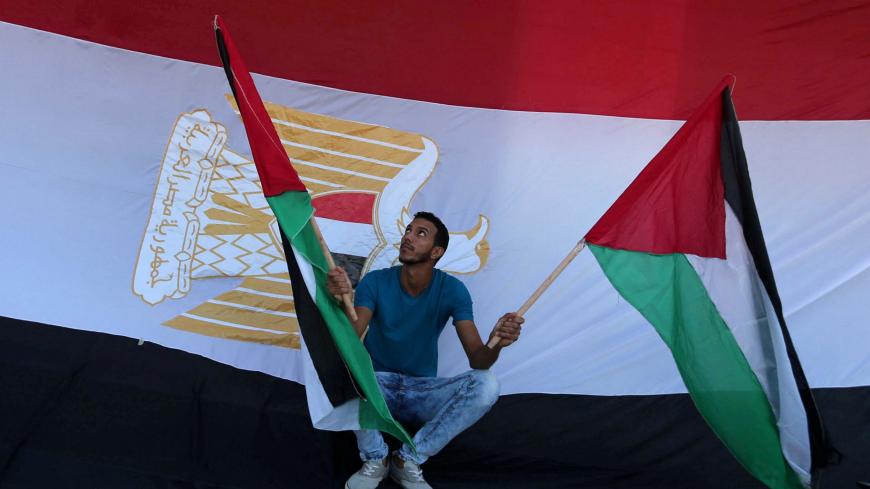 A man holds Palestinian flags as an Egyptian flag is seen in the background during celebrations after Hamas said it reached a deal with Palestinian rival Fatah, in the central Gaza Strip, Oct. 12, 2017. - REUTERS/Ibraheem Abu Mustafa

The Fatah-led Palestinian Authority (PA) in the West Bank wants Hamas to give up administrative control of the Gaza Strip, including ministries, security, courts, border crossings and tax collections. But Hamas refuses to oblige and is asking for partnership in managing Palestinian affairs on the civil, security and political levels.

An Egyptian security delegation headed by Ministry of Intelligence Undersecretary Ayman Badih visited Ramallah on July 11 and met with Palestinian General Intelligence Services chief Majed Faraj, who is also a member of the Fatah-affiliated Reconciliation Follow-up Committee. The delegation then headed to the Gaza Strip the next day to meet with Hamas leadership, and returned to Ramallah on July 13 to meet with PA President Mahmoud Abbas and discuss the outcome of the talks.

Since 2012, Egypt has made huge efforts to end the Palestinian rift, but no real pact has ever been sealed. They came close to an agreement in October 2017 in Cairo, but disputes between Fatah and Hamas soon resurfaced. Hamas didn't allow the consensus government to take over responsibility in the Gaza Strip, and the PA didn't pay the salaries of Gaza's government employees who were appointed by Hamas following the 2007 rift.

Abbas then disbanded the Palestinian Legislative Council (PLC) in December 2018, and in April formed a new government made up of PLO factions, without Hamas and the Palestinian Islamic Jihad (PIJ).

There is a media blackout on current reconciliation talks in an apparent effort to avoid derailing the Egyptian mediation, as Fatah and Hamas in the past have accused each other of obstructing the process.

A high-ranking source in Egyptian intelligence who attended the talks told Al-Monitor on condition of anonymity that the Egyptian delegation is proposing a plan that's more structured than previous ones. Hamas would hand over the Gaza Strip to the current Palestinian government, which is what Abbas insists on, and then a national unity government would be formed through a consensus among all Palestinian factions. This government would hold general Palestinian elections later.

These demands were also part of the 2017 reconciliation agreement, “but both parties slackened at the time,” the source explained. The new vision focuses on completing the reconciliation step by step, guaranteeing the demands of both parties along the way in a three-month time frame leading up to the elections.

The Egyptian source said Fatah agreed to this vision and Hamas was positive, on condition that any government handling the rule in Gaza Strip would be responsible for paying all 42,000 employees’ salaries, without exception.

The source noted, “Hamas has another condition: After the unity government is formed, it wants to activate the PLO Temporary Leadership Framework, with the participation of all Palestinian factions, to reform the organization. This is Hamas’ condition to join the organization.”

The Temporary Leadership Framework committee was formed in 2005 in Cairo to integrate Hamas and the PIJ into the PLO and include them in the decision-making process. The committee comprises members of the PLO’s Executive Committee and secretary generals of the Palestinian factions. All agreements, including the 2011 Cairo agreement, have stipulated the need to activate the framework as a requirement to complete the reconciliation.

The source reported that the Egyptian delegation would return to the Palestinian territories soon to kick-start this plan, which includes Hamas handing over the Gaza Strip crossings to the PA and accepting a visit from Palestinian Prime Minister Mohammad Shtayyeh to Gaza to take over the ministries. The steps are to be implemented within three months at most, under the supervision of Egyptian intelligence.

The Egyptian source said, “If these steps continue unencumbered, we will soon witness a Palestinian meeting in Cairo between Abbas and Ismail Haniyeh, the head of Hamas’ political bureau, in the presence of the leaders of other factions to agree on the [terms].”

Majed al-Fetyani, secretary of the Fatah Revolutionary Council, told Al-Monitor, "The Egyptian proposals and the reactions of both parties seem promising."

According to Fetyani, Abbas doesn't mind activating the PLO’s leadership framework, “but this can't happen amid the ongoing rift and the presence of two authorities, in Gaza and the West Bank."

"This is the basis of the new Egyptian initiative that focuses on uniting the rules in Gaza and the West Bank as a first step in the reconciliation," he said.

Hamas spokesperson Abdullatif al-Kanou told Al-Monitor, “The Egyptian initiative relies on a partnership-based reconciliation and on fixing the internal Palestinian situation by activating the PLO’s framework, forming a new reconciliation government and heading to legislative and presidential elections.”

He added, “The Palestinian reconciliation will remain idle if it's not based on a partnership that ends the monopolization of the rule by one party or the other."

Iyad al-Qarra, a political writer and analyst at the Hamas-affiliated Felesteen newspaper, told Al-Monitor that Egypt's efforts will bring Fatah and Hamas closer together on their demands. He noted that Hamas wants to break Fatah’s hold on the PA and pave the way for general elections rather than legislative ones only.

On Dec. 22, Abbas called for holding legislative elections, but Hamas refused and called for general elections, including ones for the legislature, presidency and national council.

So far, the Palestinian public doesn't seem too invested in this rapprochement effort, probably because of repeated failures in the past. However, it's waiting impatiently for a serious Fatah-Hamas reconciliation that would put an end to a dark era.