Rival Palestinian factions unite against US 'deal of century'

Hamas and Islamic Jihad officials attended an emergency Palestinian leadership meeting in Ramallah to discuss how to respond to the US administration's peace plan, and another meeting is planned this week in the Gaza Strip. 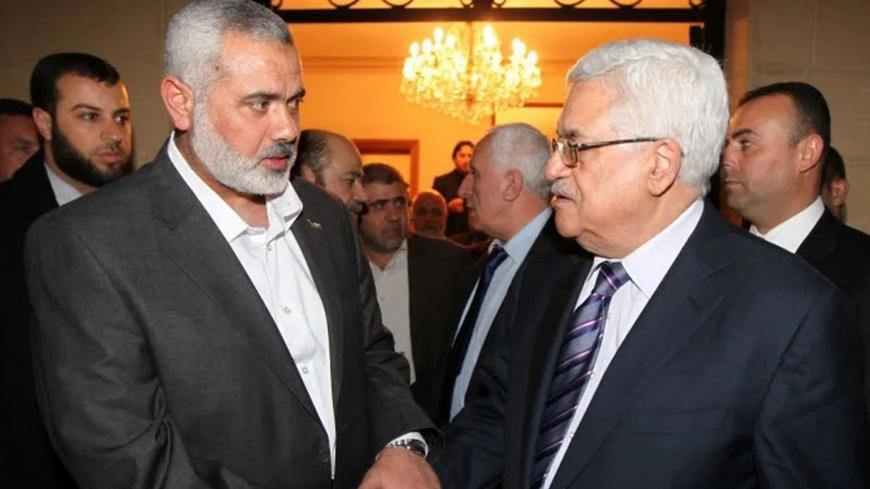 GAZA CITY, Gaza Strip — US President Donald Trump's "deal of the century" quickly created a sort of peace in the Middle East, but not the kind he had in mind.

The US proposal, officially unveiled Jan. 28, immediately brought together rival Palestinian factions united in their utter rejection of the deal. That same day, representatives of the Hamas and Islamic Jihad movements participated, for the first time in years, in an emergency Palestinian leadership meeting in Ramallah.

The Palestinian presidency invited the two movements to attend the meeting, ending — at least temporarily — a yearslong state of rupture between Hamas leaders and Palestinian President Mahmoud Abbas.

The presidential initiative paved the way for resumption of long-stalled reconciliation dialogue. The last meeting between the Hamas leadership and Abbas was held in Qatar in October 2016 to discuss an end to division, forming a government of national unity and holding general elections. However, attempts to achieve unity since the meeting failed.

Before the most recent meeting, Ismail Haniyeh, head of the Hamas political bureau, called Abbas on Jan. 28 and stressed the need for joint political and field work against the US and Israeli goals. Abbas was said to have appreciated the call. Haniyeh also has invited the Palestinian factions to schedule an urgent meeting in Cairo to confront the US peace plan.

An official close to the Palestinian presidency told Al-Monitor on condition of anonymity that the Hamas leaders who attended the Ramallah meeting called on Abbas to take serious steps toward ending the division by immediately scheduling another meeting with the Hamas leadership in the Gaza Strip.

Abbas Zaki, a member of the Fatah Central Committee, told Al-Monitor that Abbas is forming a delegation of Palestinian factions to visit the Gaza Strip for the middle of this week.

Zaki added that Hamas’ response to the emergency meeting in Ramallah showed how seriously the movement is taking the threat posed by the US peace proposal.

Omar Abdul Razak, a former finance minister in the Gaza Strip, told Al-Monitor the meeting he attended in Ramallah was positive. He indicated that Abbas stressed the need to end division and overcome obstacles hindering an agreement with Hamas.

Abdul Razak, a former Hamas leader, said Palestinians want Abbas to walk the talk when it comes to implementing Palestinian Central Council decisions issued in 2015 and 2018 to put an end to PA security coordination with Israel. He added that for any national dialogue to succeed, Palestinians in the West Bank expect wider public freedoms, trade union and partisan action and for political detainees to be released.

He concurred with Abdul Razak and told Al-Monitor that Palestinians in the West Bank have concerns over public freedoms and division that need to be addressed before any talks are held about the US plan seen as an attempt to liquidate the Palestinian cause.

“We heard new rhetoric and positive language during the meeting that brought us together with the president, and we believe this meeting will pave the way for an end to division,” Shaer said.

Palestinians usually don't expect much of meetings held among factions, due to the repeated failure of such events over the past 12 years.

However, Abdel Sattar Qassem, a political science professor at An-Najah National University, told Al-Monitor that this time around, the Palestinian factions’ meeting in Gaza will be held under special circumstances not witnessed in years, featuring a strong common interest, and this gives Palestinians hope that it will lead to ending division.

Qassem called on the Palestinian Authority (PA) and PLO factions to support the popular and armed resistance against Israel, as all options to settle the matter have failed and the US administration is biased toward Israel.

Wissam Afifa, a political analyst and former editor of Hamas-affiliated news site Al-Resalah, told Al-Monitor that the failed negotiations with Israel, which the PA was relying on to establish a Palestinian state, pushed the PA to sit down with the Gaza Strip factions to try to end their division.

Despite the cautious optimism about the results of the upcoming factions’ meeting in the Gaza Strip next week, Palestinians still expect tangible steps aimed at ending internal division to focus on confronting the US peace plan.