The deepening rift between Fatah, Hamas

Hamas-Fatah relations are further deteriorating as the two movements uphold their storm of mutual accusations, halting any foreseeable prospects of unity. 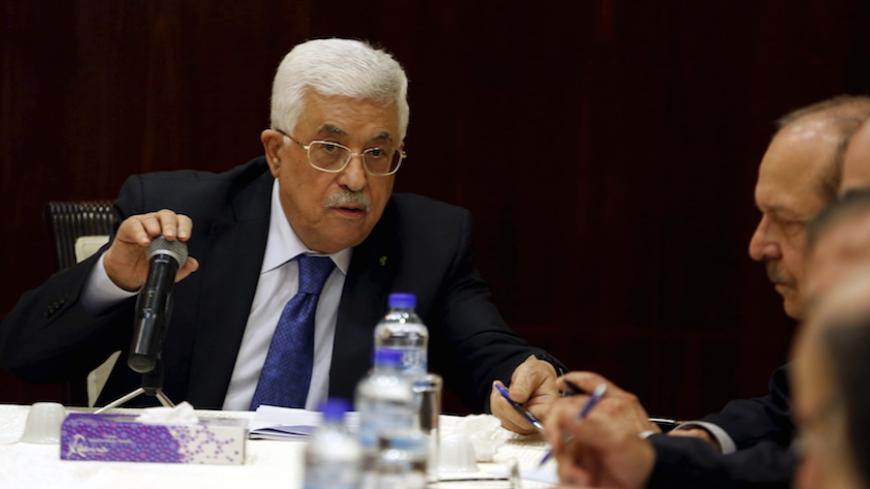 RAMALLAH, West Bank — Fatah-Hamas ties slid down a slippery slope late last week following mutual accusations of treason. This has weighed down the ties between the two movements, as well as the timid efforts to implement the stalled reconciliation deal signed in April 2014. Islamic Jihad and leftist factions attempted to prevent the collapse of reconciliation prospects.

To this effect, the PLO's Executive Committee announced March 19 that it will be send a delegation representing all factions to the Gaza Strip to hold an inclusive dialogue with the participation of Hamas and Islamic Jihad. The dialogue will address the implementation of previous agreements, such as preparing for the elections, developing the framework of the PLO and helping the government supervise the Gaza Strip and certain border crossings.

Accusations of treason were ignited March 13, when Gaza's Interior Ministry released recordings attributed to Ramallah's security services. The ministry claimed that the security forces were responsible for “the destabilization of Gaza, the spread of chaos and the surveillance and armament of military wings in Gaza.” Meanwhile, Hamas leader Mahmoud al-Zahar accused President Mahmoud Abbas of “personally being involved in the destabilization of Gaza.”

Fatah spokesman Ahmad Assaf said that the objective of Hamas’ accusations is “to justify the separation of the Gaza Strip [from the West Bank], and to cover up the involvement of some of its leaders in spying and security cooperation with Israel.”

The mutual accusations have escalated the dispute between the two movements — a dispute that is concretely reflected in the administrative separation of the Gaza Strip from the West Bank. The separation began on June 7, 2007, when Hamas and Fatah-affiliated security forces clashed in the Gaza Strip, essentially a civil war lasting just a few days. ​Hamas then took over Gaza's security and political institutions, prompting Abbas to declare a state of emergency in the Palestinian territories.

Assaf told Al-Monitor that Hamas accusing Fatah of collaborating with Israel proves that Hamas “does not want reconciliation,” and has only a single plan: “the separation of Gaza from the West Bank and the establishment of its [Hamas’] chiefdom in Gaza.” Hamas’ accusations, said Assaf, are designed “to complete the separation of the Gaza Strip from the West Bank, to cover up the treason at the top of Hamas' pyramid [that is] taking place in Gaza under the pretext of so-called collaboration [with Israel].”

Assaf said that the treason of Hamas' leaders is evidenced by Israel's knowledge of the whereabouts of Mohammed al-Deif, commander of the Izz ad-Din al-Qassam Brigades, during the recent war. ​Knowledge of top leaders' locations is usually confined to the narrow circle of Hamas' leadership, yet Israel was also able to identify the whereabouts of Said al-Sayyam in 2009 and Mahmoud al-Mabhouh in Dubai in 2010, leading to the figures' assassinations.

"He who wants reconciliation does not speak this way," said Assaf, "but implements what was agreed upon, and consults with the people by holding comprehensive elections." Assaf ruled out the possibility that the two movements will hold meetings in the near future, and said, “The Hamas movement is farthest from reconciliation.”

Last April 23, Fatah and Hamas signed a reconciliation deal — known as the Beach refugee camp agreement — under the auspices of PLO factions in the Gaza Strip. The agreement stipulated the formation of a consensus government that would pave the way for elections.

The consensus government was sworn in last June 2, yet it has failed to conduct the task of preparing for presidential and legislative elections, as required. As detailed in the agreement, the government's main duty was to prepare for elections, since the Legislative Council is disabled and no longer has any powers. Furthermore, the institutions of the West Bank and the Gaza Strip were to be unified under the supervision of a government based on popular support.

Fatah and Hamas have also failed to implement other clauses in the reconciliation deal, including “community reconciliation, developing the PLO, holding elections and resuming the work of the Legislative Council.”

Moussa rejected the accusations leveled against his movement, saying: “Should we have wanted a state to be established in Gaza, it would have been an easy thing to do. Yet Gaza and Hamas are paying the price for rejecting the separation of Jerusalem and the West Bank from the Gaza Strip.”

Moussa expressed Hamas’ wish for national factions to control the implementation of the reconciliation deal. He added that Hamas has opted for "national unity." Hamas is also eager for the "consensus government to assume its responsibility and tasks, the partnership and the inevitable work to restore the West Bank, in which Israel has increased ambitions.”

Regarding the Interior Ministry news conference, Moussa said it "disclosed the facts. These facts are not part of a media dispute or a threat to the reconciliation. It is the existing reality and President Abbas has not denied it when he said that ‘security coordination is sacred.’"

A delegation of PLO factions was supposed to visit Gaza in early February to discuss the implementation of the reconciliation deal and the enablement of a consensus government in Gaza. Yet, PLO Executive Committee member Wasel Abu Yousef told Al-Monitor: “The mutual accusations between the two parties will have an impact on the reconciliation. Yet the bet on the national project that includes all factions still holds.”

Abu Yousef added that Hamas' accusations have aggravated the situation, at a time when one must be keen to unite the ranks to achieve national unity and to give the consensus government a chance to extend its sovereignty over Gaza and the border crossings. Abu Yousef said that the two parties must agree to halt the bickering that is blocking reconciliation.

Qais Abdul Karim, deputy secretary-general of the Democratic Front for the Liberation of Palestine, said the recent bickering between Fatah and Hamas has turned the clock back in terms reconciliation.

Abdul Karim said that the Executive Committee will discuss the PLO delegation's visit to Gaza in an attempt to halt the dispute between the two movements. “This requires a clear atmosphere to resume efforts for a successful dialogue,” said Karim.

Ahmad Jamil Azem, a university lecturer and political analyst, told Al-Monitor that reconciliation, from the beginning, was nearly impossible, given the presence of parties within the movements — as well as international parties — that oppose reconciliation.

“All factors are not now serving the reconciliation, because the parties are not suggesting a new strategic vision for the current phase, and there is no national reference following up on what is going on,” he said.

Azem said that the situation between the two movements might deteriorate: "Both parties have many plans that are not based on the reconciliation, but rather on the resolution of the conflict and their disputes."

After seven years of division, the two movements continue to exchange mutual accusations from time to time, throwing reconciliation into an open-ended vicious circle, despite the persistent internal problems and popular discontent.