Although a constitutional amendment to switch the Turkish government to a presidential system looks likely to pass parliament, the outcome of a referendum on the measure is anyone's guess. 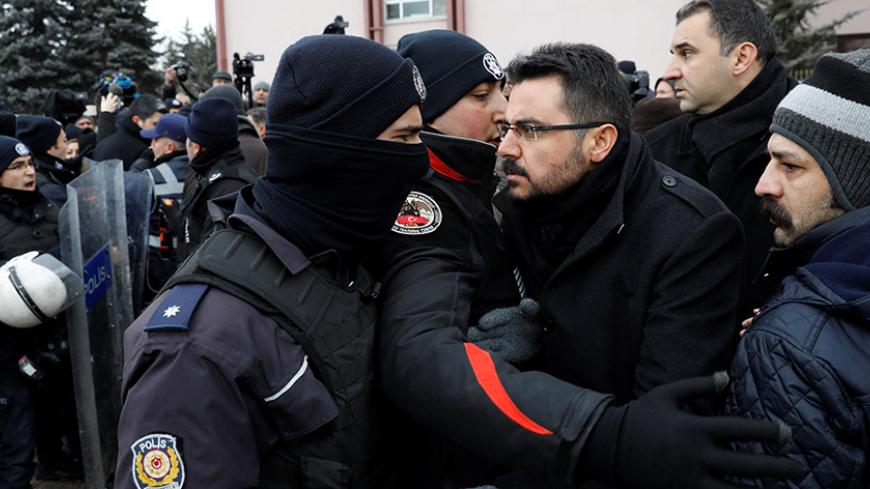 Turkey’s parliament has begun debating proposed changes to the constitution that would formalize the sweeping powers already exercised by the country’s president, Recep Tayyip Erdogan. The Jan. 9 session got off to a stormy start as opposition lawmakers resorted to filibustering to delay voting. Outside the parliament building, police used pepper spray to disperse hundreds of demonstrators protesting the amendment of the constitution.

The new measures would allow Erdogan to abolish the premiership, dissolve parliament at any time, appoint 12 of the 15 members of the Constitutional Court, serve a further two terms (until 2029) and perhaps even retain his title as chairman of the ruling Justice and Development Party (AKP). Erdogan insists that such changes are necessary if Turkey is to take its rightful place as a global power. Critics believe that if anything, they will cement one-man rule and accelerate Turkey’s slide into a full-blown Soviet-style dictatorship in which elections are no more than a rubber stamp.

The main opposition Republican People’s Party is expected to vote overwhelmingly against the proposal, as is the pro-Kurdish Peoples’ Democratic Party (HDP). However, 12 HDP deputies, including co-chairs Selahattin Demirtas and Figen Yuksekdag, are in jail and will thus be denied a vote. In a letter to the parliament, Demirtas challenged the legitimacy of the proceedings, writing, “[Our] right to vote has been effectively usurped.”

Most pundits think the bill will garner the required 330 votes in the 550-member chamber to put the constitutional package to a referendum because the AKP has secured the support of the far-right, ultranationalist Nationalist Movement Party (MHP) by helping its leader, Devlet Bahceli, face down a leadership challenge and ratcheting up the conflict against Kurdish militants in Turkey and Syria. Besides, should Erdogan get his way, and he usually does, balloting will not be secret, a tactic meant to forestall possible defections within the AKP.

Work on the package is expected to run until the end of January. Deputy Prime Minister Nurettin Canikli said a referendum might be held the first week in April. Still, not everyone believes it will be smooth sailing. Bitter divisions persist within the MHP, and at least five nationalist lawmakers have already declared that they are against the bill.

Atilla Kaya, an MHP deputy chairman, resigned Jan. 4 in protest over his party’s support for Erdogan. Similarly, ethnic Kurds in the AKP are said to be upset over the party’s harsh treatment of their kin. A source with intimate ties to the AKP contended, however, in anonymous comments to Al-Monitor that these deputies' loyalty could be bought. “They are all for sale,” he claimed.

A seemingly unremitting wave of terrorist attacks has done little to dent Erdogan’s popularity, and a recent opinion poll suggests that the AKP’s spin doctors have succeeded in convincing the Turkish public that the United States is to blame. In a December survey by the A&G polling company, some 76% of respondents said a foreign power was behind the attacks. Of those respondents, 80.3% believe the United States is the real force behind the attacks. The No. 2 culprit in their view is Israel, followed by the European Union.

The survey was conducted after the Kurdistan Freedom Falcons, the urban terror arm of the Kurdistan Workers Party (PKK), murdered dozens of police and civilians in two separate attacks in Istanbul Dec. 10. According to pollsters, PKK violence tends to rally nationalist voters behind the AKP.

Erdogan’s real challenge is the country’s sagging economy, which has been hit by US Federal Reserve rate hikes, plummeting tourism revenues and investor jitters in the face of spiraling terror and political instability. The Turkish lira sank to a record low against the dollar on Jan. 9.

The key question, as Turkey watchers see it, is whether the economic fallout will be big enough to affect the results of the constitutional referendum in April. Most seem to concur that Erdogan will stop at nothing to ensure that it does not.