As Egypt paid its condolences to the death of former Iranian President Ayatollah Ali Akbar Hashemi Rafsanjani, many observers do not expect Rafsanjani's death to affect the rapprochement attempts between both countries. 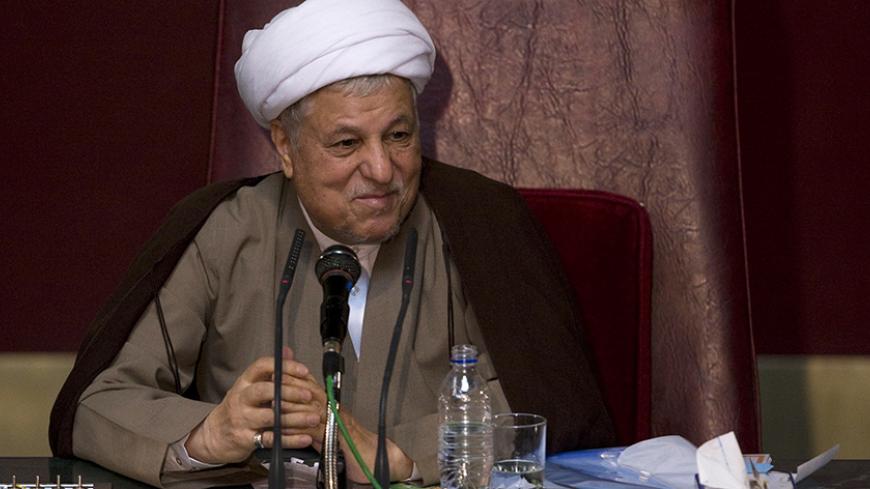 Ali Akbar Hashemi Rafsanjani, the chairman of the Assembly of Experts, delivers the opening speech during the biannual meeting of the assembly in Tehran, Sept. 22, 2009. - REUTERS/Caren Firouz

Chairman of the Expediency Discernment Council of the System (EDCS) and former Iranian President Ayatollah Ali Akbar Hashemi Rafsanjani died Jan. 8, and his death might have put a nail in the coffin of normalization between Egypt and Iran.

Although the office in Cairo received several ambassadors from different countries, a diplomatic source in the Interests Section told Al-Monitor on condition of anonymity that Iran deeply appreciated the Egyptian condolences in particular. He said that those in charge of the office warmly welcomed Mounir “because it was the first contact between the two countries at this level following a long time of strained relations, which suggests that the chances of improving relations and rapprochement between the two countries are increasing and are further applauded by the two governments.”

Egyptian-Iranian relations have been strained since the 1979 Islamic Revolution and the overthrow of Iran's last shah, Mohammad Reza Pahlavi, who had good relations with Egypt. Those ties had led former President Anwar Sadat to give Pahlavi political asylum in Egypt after the Islamic Revolution, thus resulting in a complete severing of diplomatic relations between the two countries in 1979.

The Iranian Interests Section office in Egypt is the most prominent footprint left by Rafsanjani in Cairo. The office was opened to mark the return of a limited diplomatic representation between the two countries in 1991 under Rafsanjani’s presidency. However, the efforts that Rafsanjani made, both when he was president and chairman of the Iranian regime's EDCS, have seemingly not been sufficient for normal relations to return. His death now calls into question his ability to incite Iranian officials to improve relations with Egypt and lead Egyptian officials to trust the Iranian intentions. Also, it calls into question the future of the improving relations following his departure.

To answer these questions, Mohamed Mohsen Abu al-Nour, a researcher specialized in Iranian affairs at Al-Azhar University, said, “Rafsanjani was very influential in attempts at bringing Egypt and Iran closer. He believed it was necessary to be open to Egypt, and he transferred his line of thought to many of his students such as former President Mohammad Khatami and current President Hassan Rouhani. Rafsanjani and his students viewed Egypt as a country no less important than Syria, sensing that peace and stability in the Middle East could not be achieved without Egypt.”

He added, “I don’t think attempts at rapprochement with Egypt will end, even if conservatives win the presidency in the May 2017 elections. Rafsanjani was able to popularize the idea of rapprochement with Egypt in the Iranian regime in general — albeit to varying degrees, with the idea taking hold the strongest among moderates and Reformists like Rouhani and Khatami.”

It should be mentioned that Rafsanjani called in remarks to Al Jazeera in 2003 for the need to normalize relations with Egypt, but he pointed out in the same context that the severance of relations was by order of the commander of the Islamic Revolution, late Ayatollah Ruhollah Khomeini. “This is why it is difficult to change the decision,” he said.

In an interview with Iranian radical newspaper Jomhuri-ye Eslami, Rafsanjani said on Feb. 11, 2011, that during the Egyptian revolution against former President Hosni Mubarak, “Egypt needs a new Khomeini, and I call on Egyptians to successfully complete their revolution."

In this regard, Mohammed Saeed Idris, the head of the Arab and regional studies unit at Al-Ahram Center for Political and Strategic Studies, told Al-Monitor that the Iranian leaders are pragmatic. He said it is unlikely that the sanctification of Khomeini's orders to cut off relations with Egypt could be the reason behind the ongoing rupture.

“The current attempts to break the ice between the two countries emanates from [Iran’s] interests as the country sees in Egypt a strong ally in the Syrian crisis — despite the fact that Egypt does not support the survival of [Syrian President] Bashar al-Assad, but favors stability in Syria,” he said.

Idris added, “Iran's attempts at rapprochement have increased following the tension between Egypt and Saudi Arabia, which suggests that Iran is trying to improve its relationship with Egypt to deal a political and regional blow to Saudi Arabia and the Gulf states. This is why I welcome the improvement of Egypt's relations with Iran, provided there is a balance in relations with Iran on the one hand and the Gulf states on the other.”

The relations between Egypt and Saudi Arabia have been tense since the beginning of October 2016, when Egypt voted in one of the United Nations Security Council meetings in favor of a Russian draft resolution to halt the war in Aleppo at a time when Saudi Arabia was against this draft. Later in October, Saudi Aramco notified the Egyptian government that it would stop supplying it with oil. Many observers considered this as a response on the part of Saudi Arabia to Egypt’s vote for the Russian draft law.

Asked about Rafsanjani’s role, Idris said, “I think he was a supporter of reducing tension with the Gulf states, which would have easily helped Egypt create some balance in its relationship with Iran on the one hand and the Gulf states on the other. But I think the attempts to improve relations are ongoing even after the departure of Rafsanjani, and the evidence is that Egypt offered its first diplomatic condolences to Iran on Rafsanjani's death.”

In 1998, Rafsanjani called for the resolution of the conflict between Iran and the United Arab Emirates over the three islands: the Greater Tunb, the Lesser Tunb and Abu Musa, through negotiations between the two countries.

Columnist Ali Hashem wrote in an Al-Monitor article that Iran’s Rafsanjani and Saudi Arabia's King Abdullah were able to build a bridge for dialogue between their countries in a bid to end political differences.

Rafsanjani left the door open to many scenarios. Only time will reveal whether his moderate and Reformist successors will continue the march of openness to Egypt and calm the situation with the Gulf states or the fundamentalists will rise to power again and confuse the calculations of the region.