Egyptian officials hope direct cash payments to the poor will be more efficient than current subsidies, but an economist wonders whether the nation has the necessary database for such a project to work. 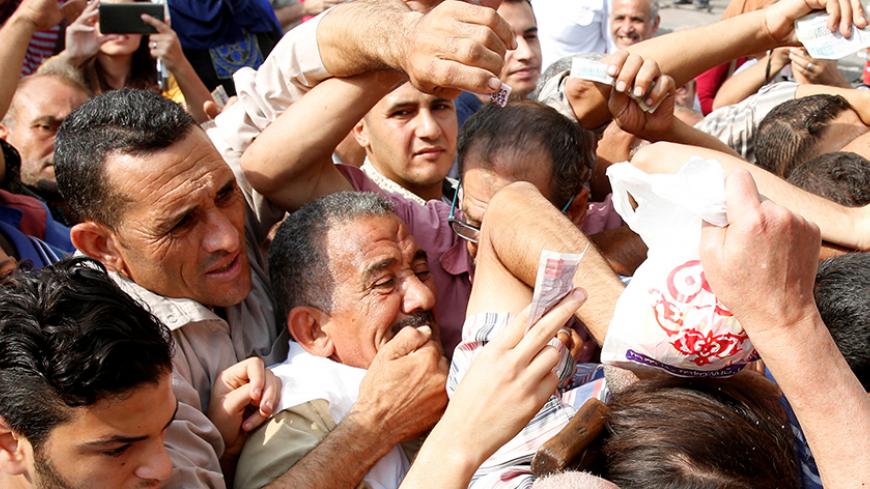 Egyptians push to buy subsidized sugar from a government truck after a sugar shortage in retail stores across the country, Cairo, Oct. 14, 2016. - REUTERS/Amr Abdallah Dalsh

The Egyptian government is planning to roll out an ambitious plan to replace subsidies with direct cash payments in an attempt to eliminate graft and give subsidies only to those who deserve them.

Two weeks ago, Egyptian Prime Minister Sherif Ismail said the government “is moving in the direction of replacing subsidies with cash transfers in the coming period.” Economists say that the move — if implemented — would help fix a broken-down system for the delivery of subsidies, which has incurred huge losses for the government.

Economist Ahmed Koura said that the cash-transfer scheme would benefit millions of poor Egyptians and help fight corruption. “It will be a game-changer for poor people. There will be no leakage. The beneficiary will not have to pay any kind of money to get his benefit,” he told Al-Monitor.

Koura added that the cash-transfer scheme would also save the government billions of dollars by eliminating fake beneficiaries and middlemen.

“No one person can receive two benefits under the same scheme using two identities and no one can falsify an identity and get a benefit,” he added. “That will result in considerable savings. The efficiency gains are incalculable. The current system has to go through several layers, it is a maze.”

According to a recent report released by the Central Agency for Public Mobilization and Statistics, subsidies went to 71.6 million Egyptians in April 2016, compared with 69.1 million in the same month a year earlier. Egypt’s population is 92 million.

As part of the new plan, the government will remove those who do not deserve subsidies from the system database, including the dead and the rich. Ismail said that the removal process will be finished early in February. Koura said that such a process will dramatically decrease the number of people who receive subsidies.

The impact of these welfare measures on reducing poverty has long been questioned because subsidies for food and fuel are often siphoned off by corrupt officials or people are forced to pay bribes to receive them.

But questions have been raised about how the scheme will work.

Economist Amr el-Gohary said that the government needs to have a comprehensive database for all citizens who deserve to receive subsidized food. “The problem is that the government does not have a proper database that can guarantee that subsidies will go to the duly-deserved recipients. If such a database has not been set up, the cash-transfer system cannot be implemented,” he added.

Gohary also said that the government has to make sure that the amount of money it will offer for poor people will be consistent with rising inflation rates following the flotation of the Egyptian pound.

In November, the Central Bank of Egypt floated its tightly controlled currency in a step that aims to draw foreign capital back to the country but risks pushing the price of goods out of reach for ordinary citizens.

Egypt’s consumer prices rose 23.3% year-on-year in December 2016, accelerating from a 19.4% increase in November. The rate was the highest since August 2008 and came as a result of floating the currency and hiking fuel prices.

“Offering 22 Egyptian pounds [$1.16] for each citizen will not be enough to help poor people meet their daily needs. Cash transfers have to be far higher than this in order to truly support poor people," Gohary said, referring to the current subsidy per person. It is thought that cash payments will exceed the current subsidy because the numbers of people receiving state support will be greatly reduced.

In 2014, the Egyptian government rolled out a new food subsidy scheme to try to put an end to the black market, eliminate corruption, improve the quality of subsidized products and allow citizens to have different food choices.

Under the scheme, the government has sold 20 different high-quality products at free market prices, while giving each person 22 pounds on their ration cards per month to buy the subsidized products. A five-member family gets 110 pounds to buy products of their own choice. The system gives Egyptians points to claim against bread and other items.

Previously, consumers were only offered three low-quality products. Each person received 1½ bottles of cooking oil, 2 kilos (4.4 pounds) of sugar and 2 kilos of rice. The current government has added new imported and locally produced products to the list, including meat, chicken and fish.

“The cash-transfer scheme will be the best solution to pull the plug on graft in the country’s subsidy system, but the government has to know how to manage it in the right way,” Gohary said.