Turkish media outlets across the political spectrum are reporting on the evacuation of the first group of residents from eastern Aleppo with hope, but also apprehension. 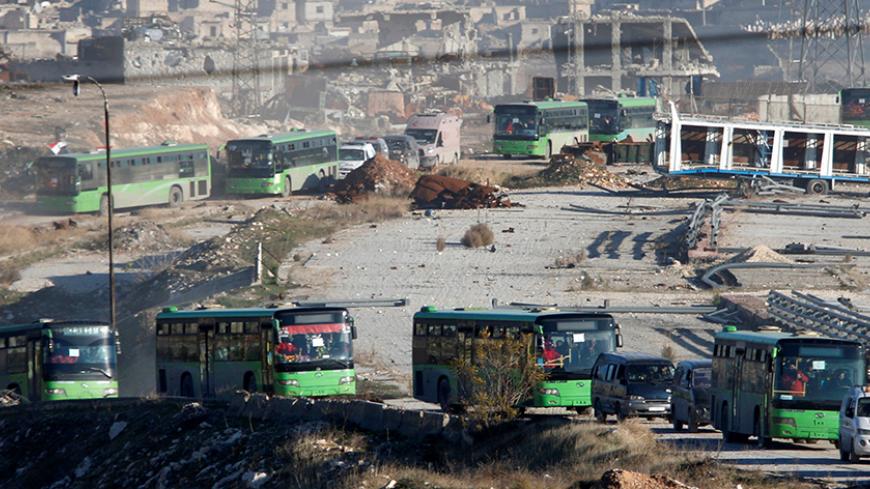 Ambulances and buses evacuating people drive out of a rebel-held part of Aleppo, Dec. 15, 2016. - REUTERS/Omar Sanadiki

A diverse range of Turkish media outlets reported Dec. 15 that the first bus convoy transporting about 1,000 Aleppans had left rebel-held districts in eastern Aleppo and arrived at areas held by other Turkey-backed rebels. Dogan Media Group’s daily newspaper Hurriyet ran the story with the flashy headline “And they arrived at their destination!” According to Hurriyet, the evacuees reached the Rashidin district west of Aleppo around 5 p.m. local time. Pro-government daily Sabah had a more dramatic headline: “They reached the target under the cover of jets.”

Since July 2012, Syria’s armed opposition backed by the United States, Turkey, Qatar and Saudi Arabia has fought the Russian and Iranian-supported Syrian regime for control of Aleppo, the country’s largest city and its commercial and cultural heart until the outbreak of the civil war in 2011. After Russia sent in ground troops and commenced airstrikes against the rebels in 2015, the tide in Aleppo and its environs slowly began to turn in the regime’s favor.

The regime’s advances in northwestern Syria puts Ankara in an awkward position. On Nov. 29, Turkish President Recep Tayyip Erdogan claimed that his country’s military operations in Syria were meant “to end the rule of the cruel [Syrian President Bashar] al-Assad.” Facing Russia’s potential wrath, Erdogan quickly walked back his remarks and said Ankara aimed to rid Syria of the Islamic State and prevent Kurdish groups from consolidating their gains along the Turkish-Syrian border. After backing the opposition for the past five years and calling for the Syrian president to step down, the fall of Aleppo is going to be a serious blow to Turkey’s attempts to reorder Syria and the greater Middle East. For now, Erdogan seems to have reconciled with the idea that his archnemesis in Damascus will win this round.

To be sure, there is still deep apprehension among Turkish government officials about whether everyone who wishes to leave eastern Aleppo will be able to do so. On Dec. 14, Foreign Minister Mevlut Cavusoglu accused the Syrian regime and its Shiite Lebanese ally Hezbollah of blocking evacuation efforts. The 1,000 people who left eastern Aleppo today are only a small fraction of the approximately 80,000 who are hoping to leave the besieged city.

In other news, Turkey is bracing to debate the constitutional amendments that would allow Erdogan to establish his long-held dream of an executive presidency. The amendments abolish the office of the prime minister and the council of ministers, concentrating all decision-making at the hands of the president. Mustafa Sentop, a deputy for the ruling Justice and Development Party (AKP) and the chair of the Constitutional Commission of the Grand National Assembly of Turkey (TBMM), announced that his committee would likely take up the proposed amendments next week. According to independent news website Diken, Sentop expects the TBMM to debate and vote on the proposed changes in January after his commission concludes its work. Next, the amendments will be voted on in a popular referendum sometime in March or April.

Under Turkey's constitution, the proposed changes could become effective immediately if at least two-thirds of parliamentarians in the TBMM (367 deputies) ratify them. If three-fifths of TBMM members (330 deputies) accept the changes, the proposed amendments would be put to a popular vote. At present, Erdogan’s AKP has 317 deputies while the secular leftist Republican People’s Party has 133. Pro-Kurdish Peoples' Democratic Party and the Nationalist Movement Party (MHP) control 59 and 39 seats, respectively. Two seats are held by independents. The AKP and MHP are expected to act in concert and put the amendments to a popular vote, which Erdogan is expected to win.