Heavy casualties at al-Bab and the recently released video of IS' burning alive of two Turkish soldiers have not affected Turkey’s Operation Euphrates Shield. 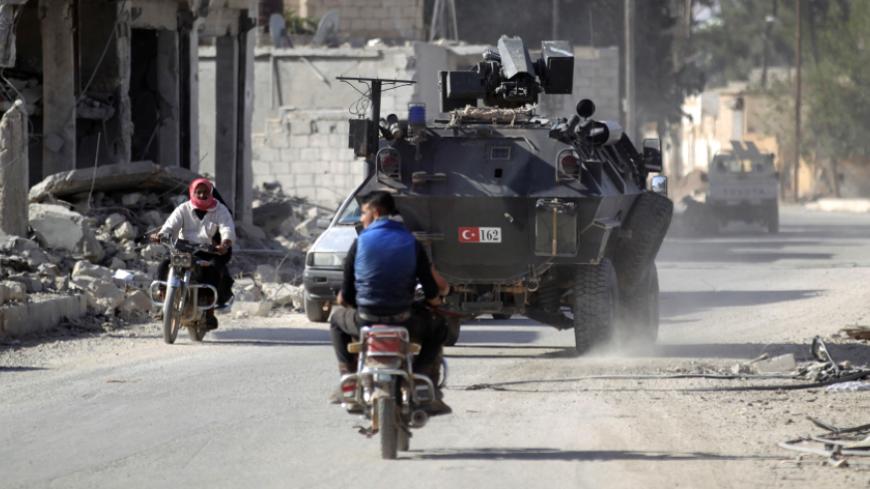 When Turkey launched Operation Euphrates Shield on Aug. 24, two objectives were declared: to distance the Islamic State (IS) from the Turkish border, and to prevent the Kurds who had crossed to the west of the Euphrates River, despite Turkey’s stated red lines, from connecting with Afrin.

Other goals that were not declared but could be read between the lines were to rescue the armed opposition groups supported by Turkey squeezed in Aleppo, to provide them with a protected zone and to prevent refugees in that zone from crossing into Turkey. Ankara was determined to block the Kurdish advances from east to west both in the south and in the north, then to enter al-Bab and put together an alternative force that might persuade the United States to terminate its partnership with the Kurds for the Raqqa operation.

But the Turkish Armed Forces (TSK) — which did not encounter strong IS resistance while capturing Jarablus, al-Rai and Dabik — began to sustain heavy casualties once it approached al-Bab.

A total of 38 TSK soldiers have been killed during the operation, including 16 on Dec. 21 alone. In addition, a video recording appeared last week on social media of two abducted Turkish soldiers being burned alive by IS. Turkish officials only said, ‘‘We are investigating,” while the government kept totally silent. All the government did was to curtail social media to prevent the discussion of the IS claim.

Turkish President Recep Tayyip Erdogan, during his daily routine of delivering speeches and attending ceremonies, did not even mention the IS video. Finally a statement came from Defense Minister Fikri Isik, who said, "We are assessing the reports on our three missing soldiers in the hands of [IS]. Nothing else has been confirmed.” The statement did not satisfy anyone.

The Turkish public is split by the tragic news. Some were frantically calling for total annihilation of the enemy, and some were asking, “If the objective is to prevent a Kurdish corridor and push IS away from our border, why are we insisting on entering al-Bab?’’

Those who had supported the operation across the border despite warnings that Syria could become a quagmire were not expecting such a heavy toll. Compared with US and Russian casualties, Turkey’s losses in Syria are too high. The United States, which has been conducting air operations in Syria since 2014 and providing advisory and training support with 300 soldiers to the Syrian Democratic Forces, has lost only one soldier. Russia, which fields 4,000 soldiers, has lost 23 since Sept. 30, 2015. But Turkey had 38 of its soldiers killed in four months of Operation Euphrates Shield, not including the two soldiers reported immolated.

There are occasional brief mentions of civilian casualties caused by the operation, but they go mostly unnoticed in a mood of extreme chauvinism, bravery and militarism. The TSK denied a report by the Syrian Human Rights Observatory that 250 civilians were killed by the Turkish operation. Turkish public opinion doesn’t have a tradition of challenging what the TSK says. Incessant declarations by the TSK of how it is hitting IS helps cool down public anger over losses of soldiers. In a nutshell, there has not been heavy public pressure on the government to make changes to Operation Euphrates Shield.

To the contrary, two days after the video of the two soldiers burned alive appeared, Erdogan again said that Turkey is determined to continue with the operation: “We have a thesis for a terror-free safe zone. If we cannot achieve that, then Gaziantep, Kilis and Urfa will always be under threat. What do they want? A new state in Syria. We will not allow the setting up of such a state. No doubt our martyrs hurt us, but for a land to be a country it needs martyrs.”

The government is fortunate to have fully convinced the opposition Republican People's Party (CHP) and the Nationalist Movement Party (MHP) of the justification for Operation Euphrates Shield. While the country was trying to cope with the pains of news from Syria, CHP Chairman Kemal Kilicdaroglu uttered, “If Turkey had launched that operation to ensure its future, it is then necessary to absorb certain agonies.” MHP leader Devlet Bahceli declared that no matter the cost, Operation Euphrates Shield must continue.

While Turkish opposition circles were holding what they called the government's misguided Syria policies for Turkey's troubles, the prowess of Syrian opposition groups supported by Turkey were slowly being questioned. Ahmet Takan of the nationalist daily Yeni Cag claimed that the ground elements of the Free Syrian Army (FSA) were traitors. He wrote, “According to plans, Turkish soldiers and about 400 FSA militants were to capture the strategic IS points. According to one officer wounded in the operation and now in hospital, after the first volley of fire from IS, most of the FSA elements deserted. Only about 40 of them stayed with our soldiers.’’

Although this particular claim could not be specifically confirmed, there is no doubt that what is called the FSA is a hodgepodge. To capture a strategic location of IS such as al-Bab or to secure a safe zone 40 kilometers by 90 kilometers (24 miles by 55 miles) by relying on such a motley crew is not an easy task. That is why as the operation deepens, the TSK is no longer a support force after the loss of 38 soldiers in four months, but in fact it is the primary combat force. Ankara was hoping to reinforce its friendly local forces with the experienced and dedicated fighters that were evacuated from Aleppo.

The recent declaration signed by Russia, Iran and Turkey in Moscow could affect the objectives and scope of Operation Euphrates Shield and Turkey’s Syria policy. It is highly unlikely that Moscow will agree to a new Turkish strategy that will make life difficult for the Syrian army or weaken President Bashar al-Assad’s hands at the negotiation table.

As Russian President Vladimir Putin declared in his press briefing Dec. 23, if Russia, Iran, Turkey and Syria are to sit at the table at Astana next month, Operation Euphrates Shield is likely to conform to the new process.

Not many will be surprised if Ankara gets a green light for al-Bab. That will be a face-saving gesture in return for Turkey’s cooperation in the Syrian army’s recapture of Aleppo and for cutting off Turkey’s military-logistics support for Syrian armed opposition groups. This will enable Turkey to boast that it has cleansed the area of IS but also blocked Kurdish ambition for a corridor. But the next step could be a demand for Turkey to hand over the areas cleansed of IS to the control of the Syrian army. After all, Putin — who is not expected to agree to a Turkish-inspired buffer zone — has enough cards in his hand to impose such a demand.