Erdogan’s war on the market economy

Challenging the tenets of the market economy, Turkish leaders have portrayed the country’s economic downturn as a foreign plot to discredit the government — an attitude that signals a dangerous course for Turkey. 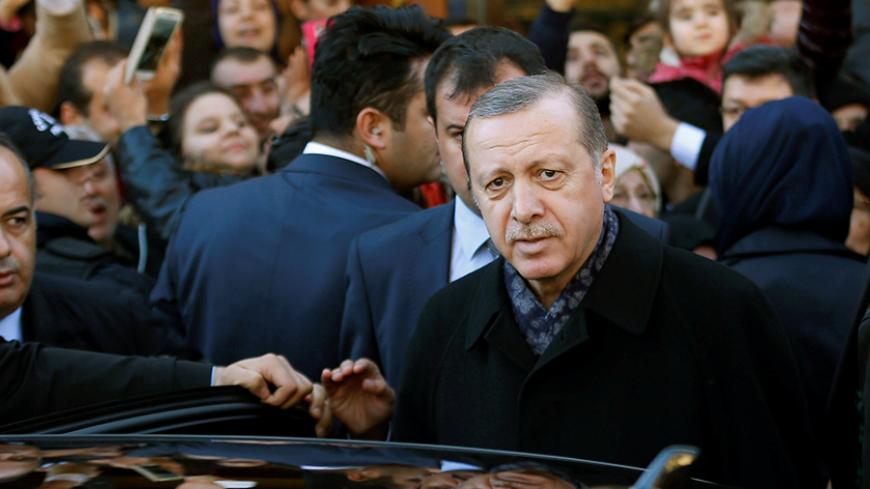 President Recep Tayyip Erdogan’s shift from a reformist to an authoritarian path has been accompanied by an insistent narrative that a “supreme mind” is behind Turkey’s woes. For Erdogan and his aides, the supreme mind is a foreign hand with an influential network inside Turkey that plans, orchestrates and triggers every crisis, unrest or setback in the country.

Who the foreign hand is, is not exactly clear. Sometimes the term alludes to the United States, sometimes to Israel and, most recently, to the international economic and political system. For the government, the supreme mind extends to a wide range of actors — from local collaborators and influence networks to financial funds and the banking system, from covert and dangerous structures such as the Gulenists to liberal intellectuals.

The term was first used in March 2014 by then-Deputy Prime Minister Bulent Arinc. Commenting on the events of Dec. 17-25, 2013 — a Gulenist attempt to unseat Erdogan intertwined with corruption probes implicating government officials — Arinc said he believed that “an operation planned by a supreme mind” had been staged. Asked by journalists what he meant by a “supreme mind,” he replied, “I cannot say. I cannot say, even if I know it.”

In a recent article, Turkish writer and political analyst Tanil Bora described how things unfolded thereafter. “As Recep Tayyip Erdogan began to use the term, it took hold in the official political rhetoric. In the runup to the June 2015 elections, for instance, it was said that [the three opposition parties in parliament] wanted to form a coalition by means of the ‘supreme mind,’” Bora wrote. “At one point, Germany was implied to be the ‘supreme mind’ of the Gezi Park revolt. The German parliament’s recognition of the Armenian genocide was said to be ‘the work of the supreme mind.’ Erdogan himself said, ‘They must have received an order from the supreme mind to take such a step.’”

The supreme mind grew into a widely used means of explanation and justification in conservative quarters and media as Turkey’s problems deepened, the Kurdistan Workers Party mounted terrorist attacks in urban centers, Ankara’s policies in the Middle East headed toward a dead end and criticism of Erdogan increased. Soon, the term became a popular symbol of Erdogan’s systematic challenges against the Western system.

Throughout history, closed, authoritarian regimes have all resorted to imaginary enemies as a tool in political purges and other totalitarian practices. No doubt, the supreme mind narrative is very much similar to the notions of “foreign enemies, imperialism, international Zionism, global powers and conspiracies” that those regimes have used.

And Turkey is no stranger to such notions. Throughout the years, the notion of imaginary enemies has been employed by the military and leftist, nationalist and Islamist quarters alike — in various forms but with the same authoritarian undertone. Just like the government does today, those actors sought to explain every domestic problem with foreign plots and systematic attacks on the Turkish nation and its values, linking any criticism and questioning to those alleged designs. The latest developments in Turkey, however, signal that the use of the supreme mind narrative has reached a new, critical phase.

The No. 1 issue in Turkey in the past several weeks has been the signs of a looming economic crisis. An economic blowback has been produced by the extraordinary state of affairs in Turkish politics, nondemocratic practices and the erosion of the rule of law. Turkey’s downgrade by credit-rating agencies and the flight of international funds are the top items on the economic bill.

But instead of trying to calm down the markets, the government has portrayed the downturn as a conspiracy by the supreme mind. The country has been rattled for some time by a sort of a war that Erdogan has opened on the market economy through accusations of a supreme mind seeking to destabilize Turkey.

When Moody’s cut Turkey’s rating to “junk” in September, Deputy Prime Minister Numan Kurtulmus, the government’s spokesman, said “the supreme mind, which plotted the coup [attempt on July 15] will do anything to create the perception that the Turkish economy is deteriorating.”

More recently, Erdogan has kept pointing to a conspiracy behind the dramatic slump of the Turkish lira against the dollar. On Dec. 4, for instance, he said, “We are well-aware of the games that some are trying to play in our country following the July 15 treachery. They are now trying to stage a coup through interest rates, the stock market and foreign exchange movements. No matter what, interest rates must be lowered.”

In one major sign of the war on the market economy, the government has put pressure on banks to cut interest rates, drawing on the emergency rule climate. Erdogan has also launched a campaign urging the nation to convert dollar assets to the Turkish lira, and public institutions have taken his appeal as an order. The campaign is increasingly becoming another psychological tool in that war, providing it also with popular leverage.

Those moves, however, are producing counter-reactions as well. Each time the president has made an interventionist statement or slammed the supreme mind, the Turkish lira has slid further against the greenback. Echoing the prevailing view among economists, Orhan Okmen, the Turkish head of the international rating agency JCR Eurasia, said, “The main reason for the Turkish lira’s depreciation is neither international developments nor external factors. The main reason lies in the domestic political structure established after the coup attempt and the emergency rule practices.”

A government waging a war on the market economy is something unprecedented in Turkey. Even the generals who carried out the 1980 coup adopted a neoliberal economic program immediately after the takeover. The Justice and Development Party (AKP) has been no enemy of the market economy either. In power since 2002, the AKP owes part of its success to robust economic growth, spawned by its liberal economic policies and a favorable global conjuncture. Then, why has Erdogan changed today?

The first reason: The high growth rates are no more. Preserving political power without economic growth is a serious problem. Erdogan has embarked on an irrational quest to revive growth, believing he can pull it off with nonmarket instruments.

Second, Erdogan’s sense of political and personal insecurity, especially since the putsch, has deepened his obsession with conspiracy theories, something for which Turkish conservatives have an extraordinary penchant. He has transformed this into a dominant political rhetoric, whereby the supreme mind is hatching up plots in the Middle East and the West to block the advance of a powerful Turkey, just as it did yesterday to prevent the recovery of the “sick man of Europe,” the Ottoman Empire.

The third reason stems from Erdogan’s paternalistic approach to politics, which is becoming increasingly difficult to rein in. His quest for a “New Turkey” — based on the notion of political power and government dominating all aspects of life, including the economy — has now triggered a shift away from liberal policies in the economic field.

In this context, the supreme mind narrative has a function beyond the familiar authoritarian tool, serving almost as a founding element in a drive for a new order. As such, it is the illustration of Turkey’s introversion ideology at a time when winds of introversion are blowing across the world. Fraught with a myriad of questions, this new order, which Erdogan describes as native and national, is the harbinger of new and big troubles for Turkey.