A correlation exists between Turkish President Recep Tayyip Erdogan’s authoritarian shift and the popular support he receives, making for a paradox that is fast dragging Turkey toward a paternalistic rule. 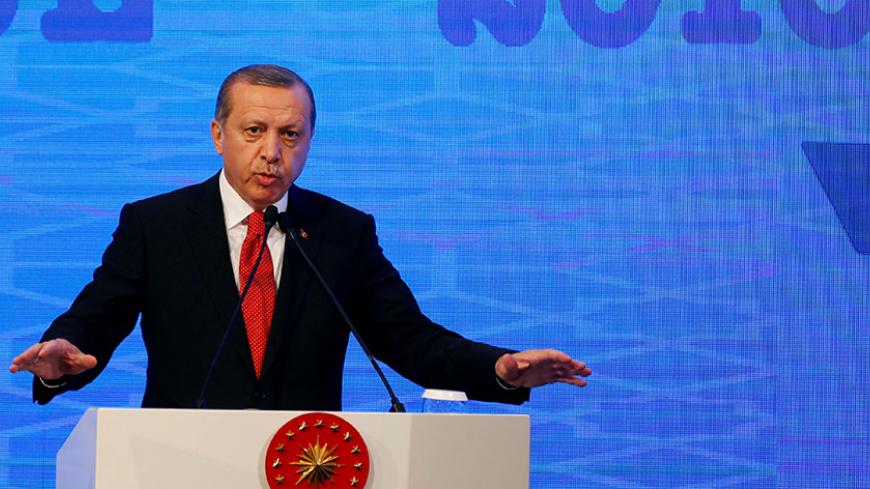 Ever since coming to power in November 2002, Turkish President Recep Tayyip Erdogan has won all elections he contested, almost always by increasing his popular support. In terms of achievement, however, Erdogan’s image and policies have not followed a steady trend. While his first decade in power was marked by reformist policies, the past five years have seen an ever-strengthening tilt toward authoritarianism. As a result, the same fundamental question has kept popping up: How does Erdogan manage to sustain his popular support and electoral success while facing so many accusations of authoritarianism and projecting such a nondemocratic image?

Ankara’s authoritarian policies have clearly peaked in the aftermath of the July 15 coup attempt. The record of the past four months is plain as day. The clampdown on Kurdish politicians and the liberal opposition — proceeding along with the purge of putschists, the suspension of freedoms, the drive to establish a political hegemony over the state and the arbitrariness in the justice system — have all reached unprecedented levels, coupled with a security-centered approach on the Kurdish question, a hard-line regional posture marked by military interventions and an increasingly fragile economy. So is Erdogan’s popular support going down this time?

According to public opinion polls, not only has he not suffered any decline in support, but he has seen his power and popularity increase. Metropoll’s October survey found that voter support for Erdogan’s Justice and Development Party (AKP) has reached 53%, a 3.5 point increase from the 49.5% vote the party won in the last general elections a year ago. Another respected polling company, A&G, puts the AKP’s voter support at 55%. Erdogan’s personal popularity has also risen. His approval rate has increased 10 points from the pre-putsch period, keeping above 50% in the past four months, according to Metropoll.

What to make of this paradox? How does the authoritarian climate go hand in hand with rising support for those responsible for it? Two major factors could explain the paradox.

The first, no doubt, stems from the historical function and class transformation that Erdogan represents as the only conservative politician who has succeeded in upending the Kemalist republican model. Thanks to Erdogan, pious social groups and religious values, alienated by the founding republican model, moved to the center of the political system. The conservative segments of Turkish society became equal to secular groups in terms of cultural rights, economic power and political representation. This shift represents the realization of a century-old aspiration for equality and lies right at the heart of the conservative Turk’s perception of democracy. In addition, Erdogan succeeded in consolidating this shift by building a new middle class. Drawing on favorable economic conditions, he expanded Turkey’s middle class from 21% of the population in 2002 to 41% in 2011.

In sum, thanks to Erdogan, the social segments he represents managed to jump over two major crossbars — an achievement that constitutes the essence of his ongoing political spell.

Moreover, Erdogan’s policies had a positive effect on the country as a whole. Turkish law became more democratic in line with the European Union’s Copenhagen criteria and the scope of freedoms expanded. As Turkey’s conservatives waged a struggle against the modernist political establishment in the 2003-2011 period, civil demands, which constituted part of their agenda, came to the fore and blended with libertarian principles in the political zeitgeist of the time. The pious social segments, in particular, came into contact with universal values and market economy rules and underwent a transformation process by partially adopting them.

The second factor behind the ongoing support for Erdogan stems from a social wave of nationalism and introversion that has grown stronger under the impact of political turbulence in recent years. Starting in 2013, the liberal trend among Turkish conservatives began to weaken, giving way to an anti-liberal one. As the Arab Spring fell flat at the expense of Islamic movements and the confrontation between Islam and the West toughened, apprehension of the West and its values flared up in Turkey. Simultaneously, a wave of violence hit the country. In the past year alone, 17 bomb attacks claimed the lives of nearly 300 civilians. On the Kurdish problem, the collapse of the settlement process eroded faith in political dialogue, and the Syrian war began to increasingly bear on domestic politics via the Syrian Kurds and the Islamic State.

As an immediate result of those developments, the atmosphere of democratic politics gave way to a security-focused sentiment and a surge of power. Thus, another underlying feature of the Turkish right — a rapport for power, obedience and order — came to the fore and began to gain dominance.

This, too, is backed by the findings of opinion polls. According to the A&G survey, for instance, 91% of Turks back the government’s anti-terror policies, even though they involve human rights violations and oppressive measures such as the arrest of Kurdish politicians. The same survey finds that 64% approve the ongoing crackdown on followers of Fethullah Gulen, the accused mastermind of the attempted coup, even though it has been marked by injustices and a growing arbitrariness on the part of the authorities, with more than 100,000 people removed from public service and more than 30,000 put behind bars.

In terms of foreign policy and surging nationalism, the Metropoll survey offers some striking findings as well. Asked whether Turkey has any rights over Mosul, 54% of the respondents reply in the affirmative. Support for Turkey’s continued military presence in Bashiqa near Mosul and military intervention in Syria is 55% in both instances.

The tensions on Turkey’s political scene are mirrored by anxiety and distress in society. Global liberal winds had once fueled democratization and class transformation in Turkey. Today, an anti-liberal political and social wave is on the rise, marked most notably by the trends in Poland and Hungary, the British vote to leave the European Union and Donald Trump’s victory in the US presidential polls. Turkey is both influenced by and contributing to this wave. The politician’s desire for hegemony and the society’s demand for stability are moving fast toward a paternalistic order. And this is what makes Erdogan’s rise unstoppable. It’s not just Erdogan’s but Turkey’s paradox.