How Erdogan won the women's vote 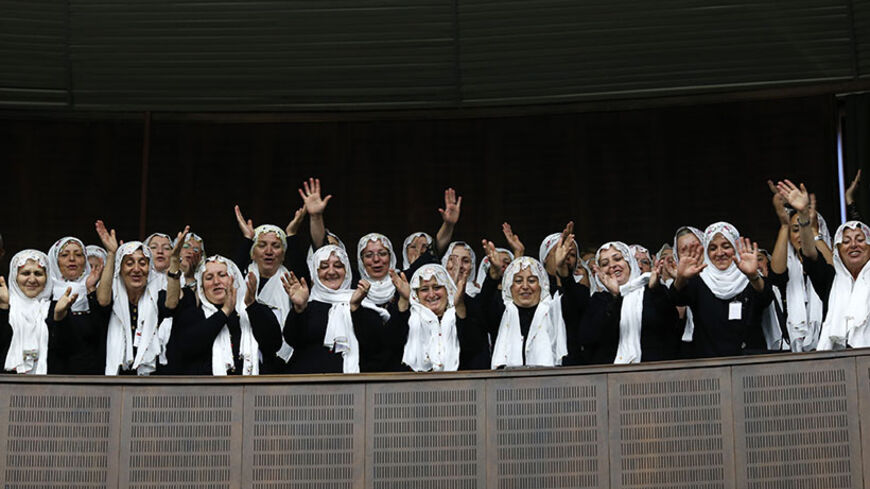 Supporters of Turkey's Prime Minister Recep Tayyip Erdogan cheer as he addresses the members of parliament from his ruling Justice and Development Party (AKP) in Ankara, June 25, 2013. - REUTERS/Umit Bektas

On Aug. 13, A&G Research Center, one of the most prestigious research centers in Turkey, announced that 55% of women and 48% of men voted for Prime Minister Recep Tayyip Erdogan in the Aug. 10 presidential election. This was an important revelation for three reasons. First, the opposition parties and pundits in Turkey are still investigating why Erdogan won in the first round so easily. They are looking for someone to blame for Erdogan’s victory. The usual suspects are those who did not vote, particularly those on vacation who had the resources to come back to vote but not the willpower. Next was the revelation that some right-wing voters indeed preferred Erdogan to the joint candidate. Particularly, it was observed that many Nationalist Action Party (MHP) constituents opted for Erdogan's Justice and Development Party (AKP). Now the latest suspect is “women voters.” How did Erdogan charm the female constituency?

The director of A&G, Adil Gur, told Al-Monitor that on Aug. 10, election day, his center conducted exit polls in 49 cities. The exit poll findings concurred with the three surveys the center did during the presidential campaign; in all of them, a higher percentage of women said they would vote for Erdogan than men. Another research center that has a reputation for accuracy and a high level of transparency is Metropoll. Ozer Sencar, director of the Metropoll Strategic and Social Research Center, told Al-Monitor that his center conducted five separate surveys during the presidential election campaign that consistently observed a gender gap. Sencar told Al-Monitor that about 53-54% of women said they would vote for Erdogan. Metropoll also found a reverse gender gap for presidential candidate Selahattin Demirtas, head of the pro-Kurdish People's Democracy Party. In all five surveys, almost twice as many men as women preferred Demirtas. This was intriguing because Demirtas’ rhetoric was quite supportive of women’s rights and liberties.

Given all the controversial rhetoric and policies about women, why do women prefer the AKP and Erdogan more than men do? Adil Gur told Al-Monitor, “This is not a new phenomenon. In the last decade or so, it has always been women who voted for the AKP more than men.” Other research centers publications have concurred with Metropoll and A&G’s findings on the gender gap as well.

Political science research has told us that by the end of the 1970s and in the early 1980s women in developed countries began identifying themselves more with left-wing parties and voting to the left of men. As women’s education levels, participation in the labor force and divorce rates increase and feminist ideas take deeper roots, more women are expected to vote to the left of men — all else being equal. Most research focuses on developed countries because developing countries' lack of transparency and reliable data cause significant hurdles for credible analysis. Hence, currently in Turkey there is yet another crisis of “polling agencies” that had to go on the record to apologize for incorrect election surveys. Some pundits view the polling results with a grain of salt, because manipulation is common. In one of the “tapes” released during the Dec. 17 corruption probe, it was alleged that a prominent TV anchor was collaborating with the director of the TV channel to rig poll results in favor of Erdogan. It is wise to be cautious.

That said, there is a consistent, significant gender gap in voting in Turkey and we can summarize four main causes why women vote to the right of men.

First, this is an expected behavior in “traditional” societies, where the roles of women follow a more conservative pattern. In a prominent study titled “Values Map 2012,” Yilmaz Esmer, a scholar from Bahcesehir University, found that 71% of women agreed that “men are the head of the household”; a striking 59% said “women should always obey their husbands”; and 60% of women said “men should get priority over women in employment.” Esmer measured changing values as well. One telling example was in 1996, when 66% of those surveyed agreed with the statement “Men would make better politicians than women.” In 2011, the figure rose to 71%. With these numbers, it is understandable that Erdogan’s rhetoric and policies on alcohol, number of children, abortion and dress code and labor market participation find female voter appreciation. A scholar has summarized this as, “Women who want protection and cuddling prefer the AKP.”

Second, the AKP has developed social policies centered upon family. Women, especially women who have limited education and work skills, found these “grants-in-aid” helpful. This is by no means “vote-buying”; rather, the AKP has generated trust from particularly conservative women that as long as the AKP is in power, their values will be protected. A&G’s Gur told Al-Monitor. “The social policies, all sorts of financial support for disabled kids, kids in school and widows are run through women with AKP policies.” In addition, segregated facilities are appreciated by these women. They credit, rightfully so, the AKP for the spread of religious education — which allows for separate schools by gender — women-only buses, swimming pools and beaches. As a young AKP supporter, Nur Cenk, told Al-Monitor during an August presidential rally, “Any woman who has attended an Erdogan rally knows that the probability of sexual harassment in the crowd is much less than with other parties because here women are respected.” These women are not concerned enough about AKP policies on women's murders, alcohol and birth control to switch their allegiances.

Next, we can attribute this to the well-organized women’s associations established through Islamist networks. As a tradition of the Muslim Brotherhood, women’s grassroots networks are crucial. Women from different neighborhoods meet to talk about different social issues, how to help each other and particularly assist women in need. These networks since the early 1990s became a crucial bastion of the AKP’s voter base.

The last explanation is probably the weakest and the most controversial. Given women’s lower levels of education and socioeconomic independence, some pundits argue that women have the right to vote, but that men vote on their behalf. In other words, women vote as they are told. We need further studies to prove this point as simple logic begs the question that if women vote as men tell them, then why is there a gender gap? One reason might be a single man gets to control multiple numbers of women. The factor of illiteracy and “obeying your husband” combined may contribute to women as “passive voters.” However, anecdotal evidence is not sufficient to measure how many women vote “under the influence.”

Despite the AKP's worries during the initial stage of the presidential campaign about the female vote, in the end Erdogan charmed the majority of women voters: He mobilized them to cast ballots, and got their vote. This is no small accomplishment for a leader whose rhetoric on women is less than “friendly” by Western standards; yet, it seems many women in traditional societies find comfort in “macho” leaders. This machismo may be a turnoff factor for other alpha males, but for now, Erdogan seems to feed the majority of women constituents, who seem happy with his policies.