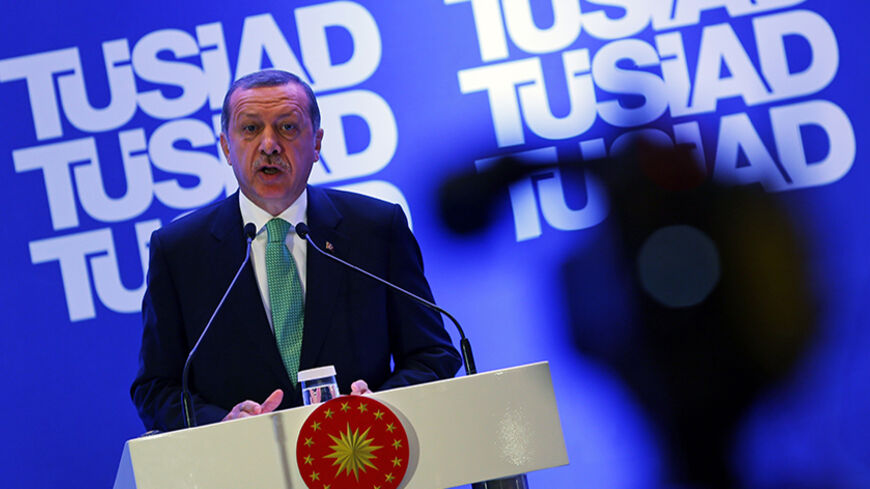 “Turkey’s love affair with credit-rating firms is proving short-lived, with officials slamming companies that in the last two years elevated the country to investment-grade status,” was the introductory sentence. That was about the harsh criticism of Turkey’s new president, Recep Tayyip Erdogan, toward the influential New York-based credit-rating companies, Moody’s and Fitch Ratings.

The word “again” was noticeable in the title. That meant it wasn’t the first time Erdogan had opened fire against credit-rating agencies. He had accused Standard & Poor’s in January 2013 and eventually severed ties with it. Now it was the turn of the remaining two out of the “Big Three.”

A day before the Journal report, Erdogan had returned from Qatar from his fourth visit abroad as president. The moment he set foot in Turkey, he opened fire simultaneously on Moody’s, Fitch and The New York Times.

Referring to the latest assessments of Moody’s and Fitch on the Turkish economy, he said, “Turkey’s economy has no risks. These statements are not economic, they are politically motivated. If need be, I’ll speak to the prime minister and we’ll cut off ties with Fitch and Moody’s.”

He also lambasted the Times for a report last weekend signed by two prestigious reporters, David E. Sanger and Julie Hirschfeld Davis, titled “Struggling to Starve ISIS of Oil Revenue, US Seeks Assistance from Turkey.” The allegation in the report that the Islamic State (IS), formerly known as ISIS, benefits from smuggling oil into Turkey angered Erdogan, who denounced the report as “ill-intentioned, ugly and contemptible” and went so far as to depict the influential Times and the American media in general as “being masters of lies and fabricated news.”

The following lines from The New York Times report should have been the source of Erdogan’s wrath:

“The territory ISIS controls in Iraq alone is currently producing anywhere from 25,000 to 40,000 barrels of oil a day, which can fetch a minimum of $1.2 million on the black market, according to Luay al-Khatteeb, a visiting foreign policy fellow at the Brookings Doha Center. ‘The key gateway through that black market is the southern corridor of Turkey,’ Mr. Khatteeb said. ‘Turkey is becoming part of this black economy that funds ISIS.’ …

“Targeting the smuggling network has proved a major challenge, and so far the Turkish authorities have been unwilling to cooperate. … There are substantial numbers of Turks that are also profiting from this, maybe even government officials. …

“The long-term American plan appears focused on persuading Turkey to crack down on the smuggling networks — some of which, one Western diplomat noted, “benefit a powerful Turkish elite” — and aiming at the refiners who would ultimately have to turn the crude oil into petrochemical products.”

The day the Journal printed its ratings agencies story, an even stronger salvo came from Erdogan. Addressing the Confederation of Tradesmen and Artisans of Turkey, he was more vocal and harsh about Moody’s and Fitch as well as the Times, which had published another story about IS recruiting people from Turkey’s capital, Ankara. According to the story, an IS recruitment center was only 100 yards away from the historic Haci Bayram Mosque, where Erdogan and Prime Minister Ahmet Davutoglu attended last Friday’s prayers.

Perhaps the following lines might have hurt the image of the Turkish government in regard to IS:

“Hacibayram, a ramshackle neighborhood in the heart of Ankara’s tourist district, has morphed into an [IS] recruitment hub over the past year. Locals say up to 100 residents have gone to fight for the group in Syria.

“It began when a stranger with a long, coarse beard started showing up in the neighborhood,” recalled Arif Akbas, the neighborhood’s elected headman of 30 years. “The next thing we knew, all the drug addicts started going to the mosque.

“One of the first men to join [IS] from the neighborhood was Ozguzhan Gozlemcioglu, known to his [IS] counterparts as Muhammad Salef. In three years, he has risen to the status of a regional commander in Raqqa and locals say he frequently travels in and out of Ankara, each time making sure to take back new recruits with him.”

Erdogan’s “bombardment” was again in the same firing pattern; first credit-rating firms, then the Times. For Moody’s and Fitch, he repeated his “threat”: “Two credit-rating agencies are criticizing Turkey with contrived assessments. Car and refrigerator sales broke records in 2013. Who do they think they are? Earlier, we terminated relations with another credit-rating agency. You pay fees to these agencies. Turkey can end its ties also with these two. We didn’t develop our economy with them. We boosted our economy by running around the world.”

But the Times bore the brunt of his hostility. “A media organ in the United States printed a photograph of Prime Minister Ahmet Davutoglu and me leaving the Haci Bayram Mosque and accused us of supporting terror organizations. Without argument, this is insolence, backstabbing, treachery. Turkey buys their [IS] oil, treats their casualties, they say. This is simply impossible.”

Erdogan’s two-pronged war on New York institutions continued Sept. 18 at the meeting of Turkey’s powerful Industrialists and Businessmen Association (TUSIAD) when he said:

“One target of the perception operation mounted against Turkey from inside and abroad is the economy. Look at the grades by credit-rating agencies. What are their criteria for grades? For a sinking country, they give a grade six levels higher. How is that possible? Germany has the best growth rate with 0.8 but we have higher than 2. They think if they cannot knock us down in politics, then let’s do it in the economy. When S&P did something similar, I warned them they were taking a political stand. Now the others are doing the same. The OECD [Organization for Economic Cooperation and Development] Secretary-General [Angel Gurria] tells me what these agencies say is not important and we should listen to what OECD says.”

And, Erdogan again, on the Times: “We did our Friday prayers at Ankara’s Haci Bayram Mosque. They took our photos. The New York Times says this is a hotbed of [IS]. Shouldn’t we all, together with our nongovernmental organizations, take a position against such disinformation?”

The sustained offensive begun by Erdogan against Moody’s, Fitch and the Times is partly due to Erdogan’s deeply rooted conviction that certain quarters in the Western world — particularly the influential financial ones — are committed to bring him down and to scuttle Turkey’s unstoppable ascent to be among the most powerful nations in the world. He is obsessed with this. Critical articles on Turkey’s position vis-a-vis IS, which increased after Turkey stayed out of the coalition of US President Barack Obama against IS, amplified his obsession.

His new and unexpected — at least for some — confrontational rhetoric on Moody’s and Fitch has something to do with his pre-emptive war against the West. He is acutely aware that his seemingly consolidated power’s soft spot is the economy, after long being his main asset. Therefore, as long as the Turkish economy is portrayed as fragile and vulnerable to shocks, especially by credible international institutions, that has to be prevented at any cost, be it by cutting links with Moody’s and Fitch, as was done with Standard and Poor’s earlier.

Turkey’s economic performance should not look tarnished until the parliamentary elections scheduled for summer 2015, which are crucial for the future and the survival of Erdogan and his prime minister alike. What we have heard since the beginning of this week were Erdogan's opening salvos in the pre-emptive war he is engaged in against the Western threats to the survival of his power.