An exhibit called "The Rise of a Nation," on display in the Qsar es-Said palace, features crucial documents in the rise of modern and democratic Tunisia, as well as 300 Ottoman-era paintings, costumes, religious objects and furniture. 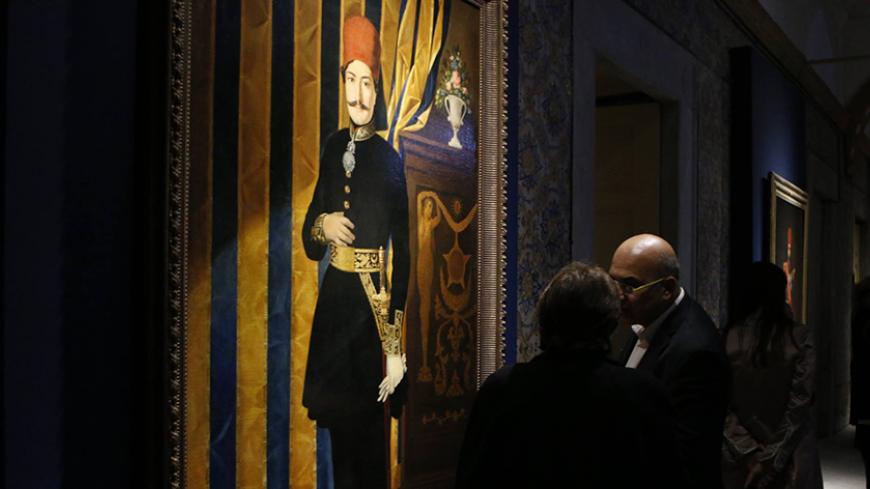 Guests look at a painting on display at the "The Rise of a Nation" exhibition at the Qsar es-Said, Tunis, Tunisia, Nov. 30, 2016. - L'Eveil d'une Nation

Long before Tunisia’s 2011 revolution, which ousted dictator Zine El Abidine Ben Ali, ushered in a period of ongoing democratic transition and arguably launched the wave of protests that continue to rock the Arab world, the North African country, then under Ottoman rule, saw another popular uprising: the 1864 revolt instigated by tribal leaders angry with forward-thinking judicial and financial legislation.

Legal documents — including one that abolishes slavery and a new constitution affording equal rights to all Tunisians — are now on public display for the first time ever along with 300 Ottoman-era paintings, costumes, religious objects and furniture. The exhibit, aptly titled “The Rise of a Nation,” is not afraid to explore periods of historical tension — in fact, that’s the goal.

“We look to the past because for us, the past was forgotten. What’s important to us is to reinvest in our history, to better invest in our contemporary. We don’t talk about the past to hide ourselves, but to project ourselves into the future,” the show’s curator Ridha Moumni told Al-Monitor.

The exhibit, on display at the Qsar es-Said palace from Nov. 27 through Feb. 27, took an impressively short 11 months to curate and organize. The palace, which has been restored to its original Arabo-Andalusian splendor, is a glamorous space for the equally ornate objects and restored paintings. It was the final residence for the last Ottoman beys of Tunisia, but despite its grandeur, it was locked up for nearly a century.

An introspective look at the rise of a “modern Tunisia,” the exhibit focuses on works from 1837 to 1881. The show is deliberately set up in a curved timeline: Upon entering the space, visitors are greeted by two paintings depicting the buying and selling of Ottoman soldiers. Tunisian Jews dressed in black "sheesheeas" (traditional hats) and "galabiyas" (robes) handle coins, and the soldiers carry swords. Actual gold and silver coins and heavy sabers inlaid with coral and swathed in red velvet are on display a bit further down the hallway.

At the center of the room are the exhibit’s most important pieces, including the constitution, which sits on a red pedestal encased in a glass box. It’s the first time the constitution has left the National Archives and been presented to the Tunisian public. Written 12 years before Istanbul’s, the first constitution in the Arab-Muslim world ensures equal legal rights to all Tunisians regardless of their race or religion. (Not women, though; aside from a few costumes, the feminine is notably absent from the exhibit, a lack that has more to do with time period than curation.) The constitution came on the heels of the decree abolishing slavery — two years before France’s own — and a pact that ended special taxes on the Jewish population. Other firsts include registers of the Jewish population written in cursive Hebrew.

It’s a time period that’s seldom discussed by Tunisians. The end of the monarchy in 1957 coincided with Tunisia’s independence from its French colonizers, and under President Habib Bourguiba, who was trying to push Tunisia to form its own political and cultural identity, “this period became a taboo subject,” Moumni explained. “Now, the revolution allows us little by little to have a bit more freedom of expression and also a liberty to act.”

The exhibit is a collaborative effort between the Rambourg Foundation and the National Heritage Institute of Tunisia. The objects are on temporary and permanent loan from the Lalla Hadria Museum in Djerba, the Alcazar Library in Marseille, the Institut National du Patrimoine, the Ministry of Culture and private collections in several countries. Though the exhibit is only set to run for three months, there are plans to keep Qsar es-Said open for the next four years. In a second phase, the organizers are working to open it as a museum with a permanent collection on 19th century Tunisia. It would be the first of its kind in the country.

“This space is a space of memory, and the goal is to reinvest in a place of memory,” said Moumni. Qsar es-Said is steeped in history. Near the end of the exhibit is the Treaty of Bardo, which eventually led to Tunisia becoming a French protectorate. The colorful marble table on which the document was signed is also on display. The palace is located around the corner from the famed Bardo museum, once the actual place of power in beylical times and now infamous for the 2015 terror attack that killed 21 people.

The Bardo mostly houses ancient artifacts and does not address Tunisia's more recent history. This lack was not lost on the organizers. “We wanted this exhibit to be a bridge of memory that is absent from the Bardo museum,” Moumni said. It’s no coincidence the two spaces are close to each other, and Moumni hopes that visited conjunctively, they can offer visitors a richer view into Tunisia’s past.

“These are very important identity issues for every Tunisian,” Moumni said. Despite the solemn nature of the exhibit, the organizers were particularly dedicated to making the show accessible for children. They purposefully opened during national holidays, and in their first week, they’ve received a group of students from the southern city of Touzeur and children of the victims of terror attacks.

As we neared the end of the exhibit, a group of girls walked by us, caught between childish excitement and the nervousness that comes from being in such a quiet space. Moumni, bespectacled and dressed in black leather, stooped down to their level. He asked if they were enjoying the show. They were. "Good," he said. “Everything belongs to you,” he added, smiling.