An exhibition in Istanbul sheds light on religious sites and pilgrimages sacred to Christians, Muslims and Jews alike, a phenomenon that is not widely known but is quite common in the Mediterranean region. 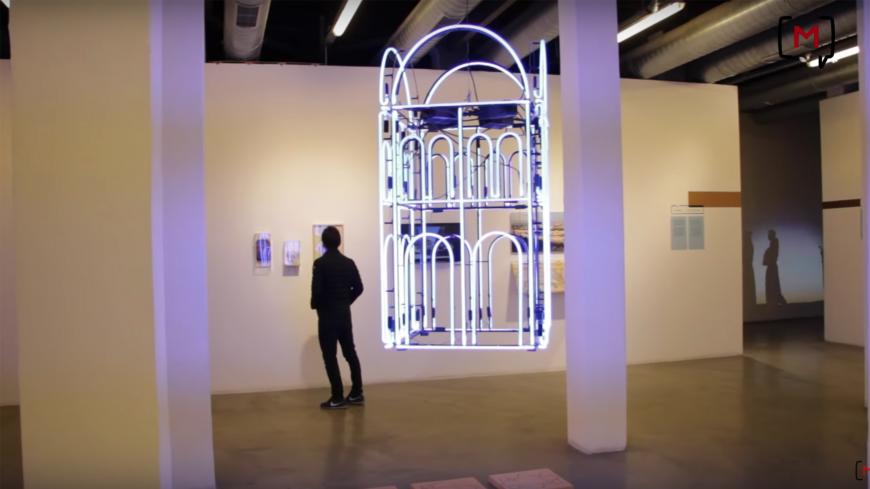 A man looks at a display at “Shared Sacred Sites,” an exhibition currently at the DEPO cultural center, Istanbul. Posted April 29, 2019. - Youtube/Medyascope.tv

Every year on April 23, tens of thousands of pilgrims flock by ferry to the island of Buyukada, the largest of Turkey's Princes’ Islands, in the Sea of Marmara. After arriving, they walk along a narrow path up a hill to a Greek-Orthodox monastery to celebrate the feast day of St. George. They say prayers, perform various rituals and ask for divine intervention, as worshippers do in any other Christian sanctuary. What is unusual and surprising in this case is that most of the pilgrims are Muslims.

Members of the Islamic faith believe that Aya Yorgi, as St. George is known in Turkish, makes no distinction among worshippers and will help them all. If their prayers are answered, they return the following year to distribute lumps of sugar and candies to their fellow devotees. With Jews making the pilgrimage as well, the Church of Saint George on Buyukada is the most prominent case in the Mediterranean region of a sacred site being shared by members of the three monotheistic religions.

“Shared Sacred Sites,” an exhibition at DEPO, a cultural center in Istanbul, recounts situations past and present of cross-cultural coexistence from North Africa to the Balkans to Anatolia. Bringing together photographs, documentaries, devotional objects and other ethnographic materials, the exhibition is a colorful antidote to the essentialist perceptions of the world in black-and-white that seem to dominate public discourse today. It powerfully challenges and undermines the prevailing narrative of us versus them.

Dionigi Albera, an anthropologist at Aix-Marseilles University and one of the curators, told Al-Monitor that a team of international experts had organized the initial incarnation of the exhibition at the Museum of European and Mediterranean Civilizations in Marseilles in 2015. The show attracted more than 120,000 visitors in four months. The organizers had approached the exhibition as a one-off event, but after jihadists killed 22 people in Tunis at the National Bardo Museum in March that year, they received a request from the Tunisian presidency to stage the exhibit there, to send a political message and show of unity in the face of extremism.

After that, “Shared Sacred Sites” traveled to Thessaloniki, Paris (to the National Museum of Immigration), Marrakech and New York. In 2015, Osman Kavala, the chair of Anadolu Kultur, the foundation that manages DEPO, decided to bring the exhibition to Istanbul. Kavala was arrested in October 2017 for alleged activities against the government, but neither that or his ongoing imprisonment stopped plans for the exhibition, with Calouste Gulbenkian Foundation and the French Cultural Center of Istanbul stepping in to provide funding. The exhibition runs through July 14 before traveling on to Ankara.

Albera, discussing the concept behind the traveling exhibition, said, “The overall theme is always the same —that is, how religions develop forms of sharing — but every time we adapt the content to the specific context. For example, in Paris there was a section devoted to inter-religious initiatives in Western Europe introduced by immigrants. In New York, we displayed the precious Morgan Picture Bible, an illuminated manuscript with texts in Latin, Persian, and Judeo-Persian. In Thessaloniki, the main focus was the Balkans, in a city that for hundreds of years has been predominantly Jewish but under Ottoman/Muslim sovereignty.”

“Shared Sacred Sites” at DEPO is organized thematically, spread among the three floors of an old tobacco warehouse now transformed into a space for culture and learning. The main point the curators impart is that the Eastern Mediterranean and North Africa are strewn with religious shrines that for centuries have been sites of convergence for prayers and contemplation. A basic distinction is made between formal places of worship — such as churches, mosques and synagogues — and more informal holy places such as tombs, caves and mountains linked to charismatic figures like saints or other intermediaries to God.

In isolated spaces, forms of devotion can become much more relaxed and easily hybridized. Spirituality takes precedence over scriptures, and the individual experience emerges as more important than the congregation. The common denominator in these venues is multi-religious attendance, hospitality and tolerance of the “other.”

The exhibition presents Istanbul, like Jerusalem, as a holy city, as a “symbolic epicenter” in the spiritual life of Christian, Jewish and Muslim adherents alike. The city once hosted sacred relics of Jesus and the Virgin Mary, including the crown of thorns (now in Paris and unscathed in the fire that recently ravaged Notre Dame). It still hosts the staff of Moses and the mantle of Muhammad, in the Topkapi Palace, and some fragments of the holy rock of Mecca, the Kaaba, are displayed on the walls of the Mosque of Sokollu Mehmed Pasha and in the tomb of Suleiman the Magnificent. Above all, the highly diverse backgrounds of the inhabitants of Istanbul have encouraged the crossing of confessional boundaries — more often with Muslims visiting Christian churches and shrines — and the emergence of shared practices of worship through proximal influence and imitation.

Practices from other parts of Turkey as well as from Egypt, Tunisia, Macedonia, Albania and the Holy Land are also featured in the exhibit. Individual cases are classified according to typologies, but the perspective is broad. It is noted, for example, that Muslims, especially women, visit the Roman Catholic Church of Saint Anthony in downtown Istanbul to light candles and pray to “Aziz Antuan.” Greek Orthodox Christians frequent the Eyup Sultan Mosque, on the Golden Horn and one of the holiest sites of Islam, drawn by the healing power of its water. Images and video recordings document the sites and activities.

An entire section is devoted to the cult of the Virgin Mary, the mother of Jesus, who is quoted more often in the Quran than in the Bible. The faithful of the three monotheistic religions, especially in areas formerly part of Constantinople, venerate Mary in Istanbul in association with an “ayazma,” a spring of reputedly miraculous water.

Sharing devotion does not always, however, mean coming together in a spirit of reciprocal respect. On the contrary, in some instances it means just the opposite — exclusive separation. This is the case with the Holy Land, where a few sites sacred to Jews, Christians and Muslims in the past — for instance, the Cave of the Patriarchs in Hebron and the tomb of Rachael in Bethlehem — are now, due to political conflict, divided into areas reserved for the different religions or are experienced in turns. This is the exception, rather than the rule.