In light of the threats of extremists over recent years, Christians in Basra lack confidence in the local authorities for securing their safety. 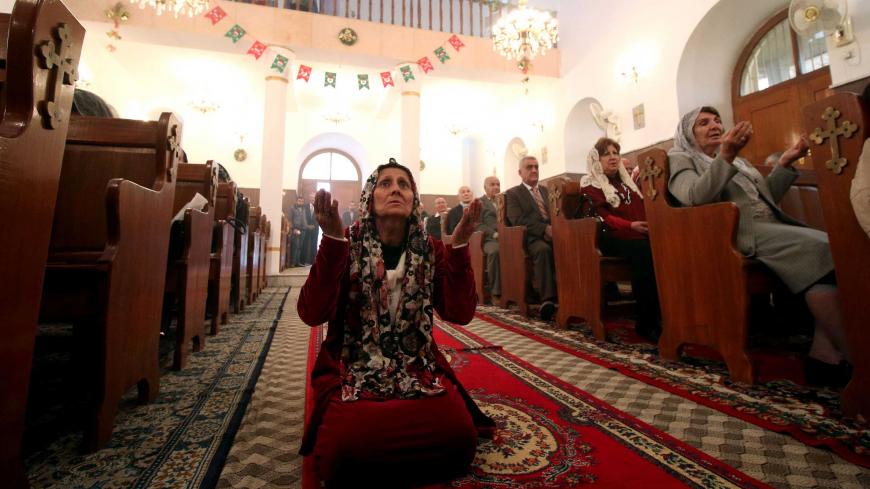 BASRA, Iraq — Shiites around the world celebrated the Arbaeen holiday Nov. 9. This year, Christians in Iraq participated in the Shiite ritual to attest to the coexistence and social interaction between the Christian minority and the Shiite majority in central and southern Iraq.

Youssef Touma Elias, an Iraqi Christian, took part in the celebrations and served the Shiite pilgrims who marched to the sacred shrine of Imam Hussein in the city of Karbala. However, this positive step by the members of the Christian minority conceals their deep fear and mistrust of the majority, who failed to protect them from the threats of extremists over recent years.

Basra has been a great historical example of cultural coexistence and harmony among its various religious components. However, it could now lose its rich religious diversity amid threats to its non-Muslim minorities. To preserve their religion and culture, Christian communities in Iraq have been isolating themselves.

On Sept. 19, a statue of the Virgin Mary was removed from the Abbasiya district in central Basra, as requested by Chaldean Catholic Patriarch of Basra Habib Hermes. Hermes described the idea of placing this statue as an exploitation of a Christian religious symbol.

In his letter to the local authorities, Hermes pointed out that erecting the statue may lead to “undesirable consequences." He added, "If a malicious person tried to harm this statue, the relationship between the different spectrums of the people of Basra would be destabilized.”

“About 90% of Basra's Christians have left Iraq since 2003, and only 350 families remain,” he said, pointing to the declining number of the Iraqi Christian minority.

Hermes’ fear over the few remaining Christians in the city and his pessimism about any positive outcome ensuing from initiatives — similar to the Christian participation in the Arbaeen holiday — seem to be justified in light of the fragile security situation in Basra, which recently turned into an arena for tribal conflicts.

Armenian activist Tony Sarkisian, the head of the Basra Armenians Organization for Relief and Development, came up with the idea of placing the Virgin Mary statue in central Basra. He was surprised by the position of the authorities. He told Al-Monitor, “The message conveyed by acts of solidarity — such as the idea of placing the statue — symbolizes national unity and coexistence among Muslims and Christians.”

Novak Aram Bedrosian, a member representing Christians on the Basra Province Council, told Al-Monitor, “Acts of solidarity, such as participation in rituals or the erection of a statue [of Virgin Mary] did not win the approval of political representatives of Christians.”

Bassam al-Alwachi, the head of LARSA, an organization for the preservation of religious heritage, told Al-Monitor. “Placing the statue of the Virgin Mary in a public square could annoy fanatical religious parties or individuals and may be exploited to ignite an unwanted sectarian crisis, as some may try to harm or destroy this statue."

Although Alwachi did not mention the identity of the fanatical religious parties, it is clear he was referring to some political Islam parties that have an interest in turning Basra into a city with a pure religious or sectarian identity.

In turn, Hermes said it would be better to “move the statue of the Virgin Mary inside the walls of a church, a monastery or a cemetery to protect it from those who seek to tamper with the security of Basra or people with weak souls.”

Alwachi added, “The churches in Basra are open to all Muslims and Christians who wish to visit the statue of the Virgin Mary at any time and get its blessings. This is something Muslim women always do.” He also pointed out that the statue will be moved with the approval and participation of Christian clerics.

Sheikh Abbas al-Fadli, the head of the Basra Tribes and Components Committee, tried to contain the fears that erupted within the scope of the controversy around the Virgin Mary statue. He noted that Basra is a city historically known for its pluralism and tolerance, and Christians are an essential component of this city. “The Muslims of Basra — like its Christians — sanctify the Virgin Mary, who is venerated in Islam,” he told Al-Monitor.