How this Tunisian commission is fighting corruption

Speaking to Al-Monitor, the head of the Tunisian Anti-Corruption Commission, Chawki Tabib, discusses the commission’s plan for the future and steps to fight corruption that hinders the building of a democratic state. 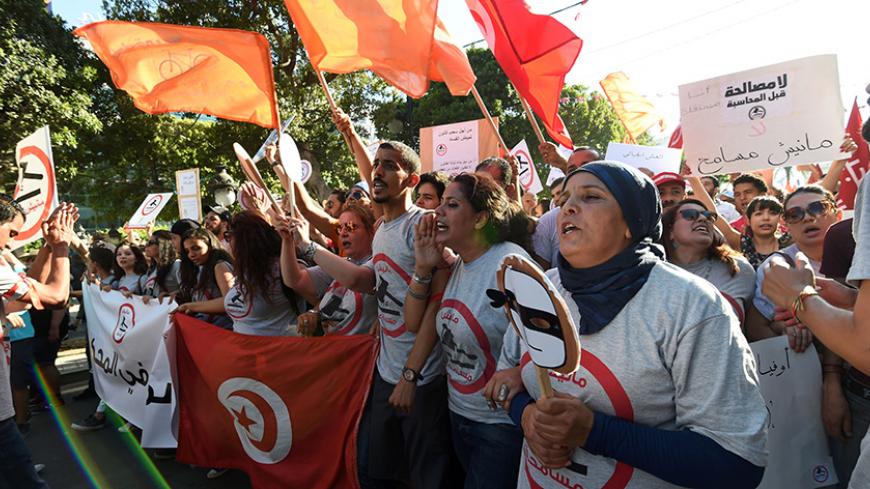 Tunisians shout slogans during a demonstration against a bill being discussed in parliament to grant amnesty to people accused of corruption, Tunis, July 25, 2016. - FETHI BELAID/AFP/Getty Images

TUNIS, Tunisia — Corruption has become a major challenge for Tunisia after it registered a decline of 17 places between 2010 and 2016 in the Corruption Perception Index (CPI), which ranks countries around the world in terms of monitoring corruption and is issued annually by Transparency International (TI).

In an interview with Al-Monitor, the head of the Tunisian Anti-Corruption Commission, Chawki Tabib, revealed from the commission’s headquarters in Tunis the reasons for the increasing corruption rates in all domains — particularly in the public sector, real estate sector and municipalities — after the fall of Zine El Abidine Ben Ali's regime in 2011. He explained the Anti-Corruption Commission’s vision on spreading the culture of good and transparent governments, while stressing the role of civil society and the need to raise awareness among citizens to fight corruption.

Al-Monitor:  Can you explain the Anti-Corruption Commission’s work, its functions and objectives?

Tabib:  In the wake of the fall of Ben Ali's regime, a committee was formed to investigate financial corruption and bribery in February 2011. In November, the committee submitted its report on the corruption situation and the government decided on Nov. 14, 2011, to establish a permanent anti-corruption body and called it the National Anti-Corruption Commission in virtue of Decree no. 120. Chapter 130 of the 2014 Tunisia Constitution mentioned the constitutionality of the commission and defined its functions as “monitoring cases of corruption within the public and private sectors. It carries out investigations into these cases and refers them to the competent authorities. … [It] contributes to policies of good governance, and preventing and fighting corruption. It is responsible for following up on the implementation and dissemination of these policies, … for the consolidation of principles of transparency, integrity and accountability.”

Al-Monitor:  In March 2016, you told ifm radio that “corruption indexes have risen five years after the fall of Ben Ali's regime.” How much did it increase and why?

Tabib:  The CPI, which is issued annually by TI, confirmed this increase. In 2010, which marked Ben Ali’s final year in power, Tunisia occupied the 59th position according to the CPI, while it made it to the 76th position in 2015.

This increase is caused by the absence of a political will to fight corruption, the lack of political stability in Tunisia after the fall of Ben Ali’s regime and the successive governments that only ruled for short periods of time — paving the way for this phenomenon to prevail.

Al-Monitor:  How many corruption cases have been reported and what is the nature of common cases of corruption?

Tabib:  Between January and August 2016, the commission received 1,937 cases of corruption, 801 of which were referred to us from the prime minister's office and 1,136 from citizens. By November, we had referred 120 cases to the judicial authorities. The cases include seizing public funds and rigging employment in the public sector and public transactions, and bribery. Also some cases are related to the work of vital public services, namely municipalities, and health care and real estate sectors.

Al-Monitor:  Do you cooperate with other state agencies in dealing with cases of corruption?

Tabib:  Our commission is indeed a governmental institution, but an independent one as far as decision-making is concerned. We have, however, cooperated with the executive, legislative and judicial authorities. We are a regulatory body that monitors corruption in all sectors and refers the cases to the judiciary in order to hold those responsible accountable. Yet some ministries take a lot of time to respond to the monitoring bodies and are thus reluctant to refer the reported cases to the judiciary. We hope the commission, which receives its annual budget from the prime minister's office, would be granted the minimum level of financial and logistical means to enable us to fulfill our commitment to the government and fight corruption.

Al-Monitor:  Do you work alone as a commission, or do you partner with the civil society?

Tabib:  Fighting corruption requires the joint efforts of all three constitutional authorities, in addition to the fourth authority represented by the media and the civil society. No matter how important the commission is, it can never confront this phenomenon alone. This is why we have signed a large-scale partnership with the civil society in early 2016 in order to organize campaigns to raise awareness of the seriousness of this phenomenon and urge citizens to report suspicions of corruption. We also organize seminars and workshops in schools and colleges to spread the culture of anti-corruption. We also held joint sessions with organizations defending press freedoms to support the journalists’ ability to deal with corruption cases.

Al-Monitor:  Which sectors are the most affected by corruption?

Tabib:  All sectors are affected by corruption, but it mostly prevails over the public sector, particularly in terms of public transactions. Up until August, the highest number of reported corruption cases was [registered] at the Ministry of Interior with almost 500 cases, followed by the Ministry of State Property with 300 cases; while the Tourism and Defense ministries and the prime minister's office had the lowest percentages. The commission received complaints of about 1,532 cases of corruption in employment in the public sector, and 1,137 cases of administrative and financial corruption.

Tabib:  The number of cases reported to the commission indicate that the number of reports submitted by the citizens is higher than those submitted by the state. Citizens are affected by corruption firsthand. However, there are no laws protecting citizens from the consequences of reporting corruption; the parliament has recently started to discuss such a law — but it has yet to be passed. Some citizens, who were known to have reported corruption, were accused of maliciousness and dismissed from their jobs. Nonetheless, the commission has a free hotline for citizens to call and report cases of corruption.

Al-Monitor:  Is it possible for corruption to affect the democratic transition in the country?

Tabib:  Over the past six years of democratic transition, Tunisia has managed to establish democratic institutions and guarantee freedom of expression as well as conduct elections. However, a democratic state cannot be established as long as corruption continues to increase and threaten the economy all the while putting the state institutions’ integrity at stake. Such a phenomenon could escalate and eventually affect civil peace. This is why if we do not seriously handle this issue, the country would turn into a battlefield for the major corruption lords.

Al-Monitor:  What future steps can the commission take in order to limit corruption?

Tabib:  The commission will unveil a national plan to fight corruption in a ceremony held on the occasion of International Anti-Corruption Day on Dec. 9. The presidents of the executive, legislative and judicial authorities will be present, along with the National Union of Tunisian Journalists and civil society representatives, to sign the plan and pledge to abide by it so every party could fulfill its share of responsibility to fight corruption. This plan was prepared by all concerned parties, and it includes an accountability section and a preventative section to raise awareness.