How this group is fighting corruption in Gaza

The Coalition for Accountability and Integrity - Aman is distributing awards to those reporting on all forms of corruption cases in Gaza, in an effort to fight this rampant phenomenon. 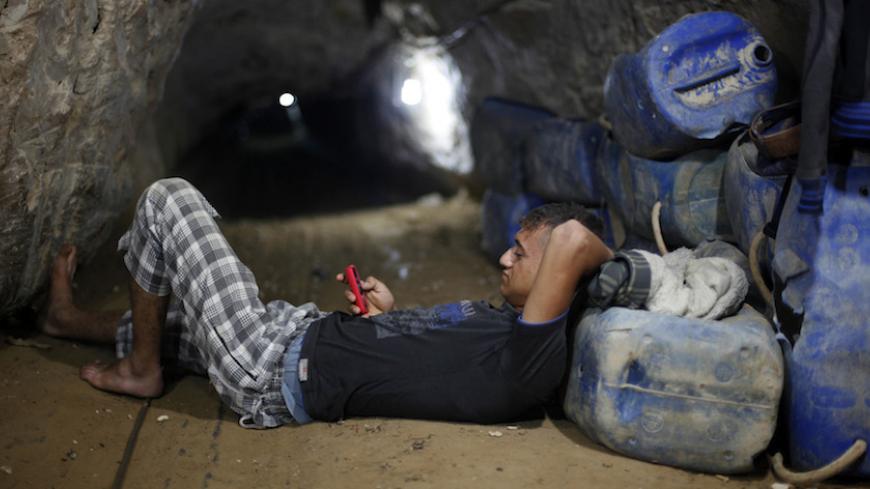 A Palestinian tunnel worker uses his cellphone as he rests inside a smuggling tunnel beneath the Gaza-Egypt border in the southern Gaza Strip, July 19, 2013. - REUTERS/Ibraheem Abu Mustafat

GAZA CITY, Gaza Strip — The Coalition for Accountability and Integrity - AMAN launched Aug. 1 its annual contest for integrity and transparency with the aim of granting the Public Sector Integrity Award, the Media Integrity Award and the Best Anti-Corruption Investigation Award. These awards will be distributed during a ceremony held by the coalition annually in the Gaza Strip and the West Bank, on International Anti-Corruption Day (Dec. 9). The awards will be granted to citizens who provide information to competent authorities such as the Palestinian Anti-Corruption Commission, the Office of Financial and Administrative Control or AMAN to help them detect or prevent corrupt practices. The awards will also be granted to people who do not engage in corrupt practices by refusing bribes.

AMAN was established in 2000 upon an initiative by a number of civil society organizations working in the field of democracy, human rights and good governance, in the framework of a civil movement seeking to combat corruption and promote integrity, transparency and accountability in the Palestinian community. The coalition operates in the West Bank and Gaza and was endorsed by Transparency International in 2006.

Abdel Kader Husseini, the head of AMAN’s board of directors, told Al-Monitor, “The main objective behind this award [ceremony] is to stimulate the various parties to take action against corruption and the corrupt, put an end to impunity and encourage everyone to assume their responsibilities by reporting acts of corruption that they witness or fall victim to, based on the grounds that reporting corruption is a national heroic act and not a tip-off.”

He added, “Palestinian citizens, regardless of their whereabouts or the nature of their work, are the most important element in the fight against corruption — be they employees in the public sector, the private sector or civil society institutions.”

AMAN has been granting, for the 11th year in a row, annual financial awards to those who contribute to disclosing suspicions of corruption or assist in the protection of public money, be it in the public sector, the local authorities or the media.

Mohammed Abu Shahmeh is a journalist with newspaper Felesteen. In 2015, he won the Media Sector Integrity Award for his investigative report about the “Gaza Strip bakeries’ use of water containing high concentrations of nitrates causing cancer.”

Abu Shahmeh told Al-Monitor that his work is a real translation of the political will through which he was able to bring about positive change based on a negative and serious phenomenon that some bakeries had been practicing in the Gaza Strip, thus harming citizens without facing any sanctions.

“I am happy that my report could mobilize the competent authorities to take legal action against the corrupt," he said.

Mohammed Abu Bakr, who won the 2015 Public Sector Integrity Award, told Al-Monitor, “I am very happy that I detected a corruption case in the public sector by revealing the smuggling through the borders of low-quality, fraudulently mixed diesel to be sold as mineral oils. This deprives the Palestinian Authority’s treasury of the financial revenue and ruins the cars of citizens who bought this low-quality fuel.”

On May 17, AMAN published a guide for those wishing to run for the Public Sector Integrity Award. The guide explains that the goal of the award is to encourage workers in the public sector and local bodies to protect public money, enhance integrity values ​​among workers in the public sector, honor workers seeking to protect public money and protect whistleblowers.

According to the guide, the awards are granted based on several criteria, including the size and relative importance of the reported case, the administrative level involved in the case, the strength of the evidence, the outcome of the reporting — i.e., whether the issue was addressed or not by the concerned party — and the detection or reporting mechanisms in terms of the safety of the measures taken by the employee to report corruption. These should be compatible with the legally adopted procedures and should adhere to the administrative hierarchy required, meaning the person who detects corruption should report the case to their manager, who, in turn, should report it to the institution's management, to obtain a referral to the competent authorities. Another criterion that is taken into consideration is the amount of time that it took the employee to report the case of corruption.

Najwa Rashid, the secretary of AMAN, told Al-Monitor, “The best anti-corruption and good governance research award at the level of the public sector, the local bodies and the media sector aims at involving and motivating young researchers and Palestinian university students to prepare research related to combating corruption and integrating young people in the integrity system and culture in Palestinian society. It also encourages them to engage in efforts to fight corruption in Palestinian society by raising awareness about the risks, consequences and causes of this phenomenon with the aim of creating a counter-community that rejects corrupt practices.”

She added, “The role of this award is to find transparent people who enjoy integrity and believe that the fight against corruption is a national effort that every citizen ought to take part in. Citizens should have the courage to reveal the facts and realize that they are partners in public money and contribute to protect it even if conveying an anti-corruption message exposes them to the risk of losing their jobs."

The Whistleblower Protection Policy grants employees the opportunity to report violations and corruption cases, and ensures they are not subjected to retaliation and victimization as a result. It also protects them from the risk of losing their job or being subjected to any form of punishment. Violations, however, should be reported in good faith and the employees’ suspicions should be based on honest and reasonable data.

The Palestinian Center for Policy and Survey Research conducted a poll June 7 in the West Bank and Gaza covering domestic Palestinian issues such as the elections, the reconciliation issue, government performance, unemployment, poverty and corruption. One of the most important results achieved by the poll was that 80% of those questioned believe corruption is rampant in PA institutions, while 38% believe that the fundamental problems facing Palestinian society today are unemployment and the widespread poverty; 10% believe that the fundamental problem is the rampant corruption in public institutions.

In this context, Rafik Natsheh, the head of the Palestinian Anti-Corruption Commission, told Al-Monitor, “There have been several and numerous forms of corruption. There were cases where people were granted high-level positions based on personal connections. There have been crimes of food corruption amid ineffective sanctions, increased nepotism, favoritism, bribery, breach of trust, abuse of public positions and embezzlement.”

Mohammed Abu al-Rub, an economics professor at An-Najah National University, told Al-Monitor, “Administrative reform within the government and civil society institutions and the reporting of corruption should be supported by a public will and real reform mechanisms to overcome the challenges and problems.”

Reporting administrative, financial and corruption cases is important in the presence of a genuine will and serious anti-corruption mechanisms that encourage people to detect and report corruption by rewarding, awarding, promoting and, more importantly, protecting them.