The Coalition for Accountability and Integrity has issued its report for 2013, focusing on corruption and the lack of oversight in official, private and civil Palestinian institutions, reports Hazem Balousha. 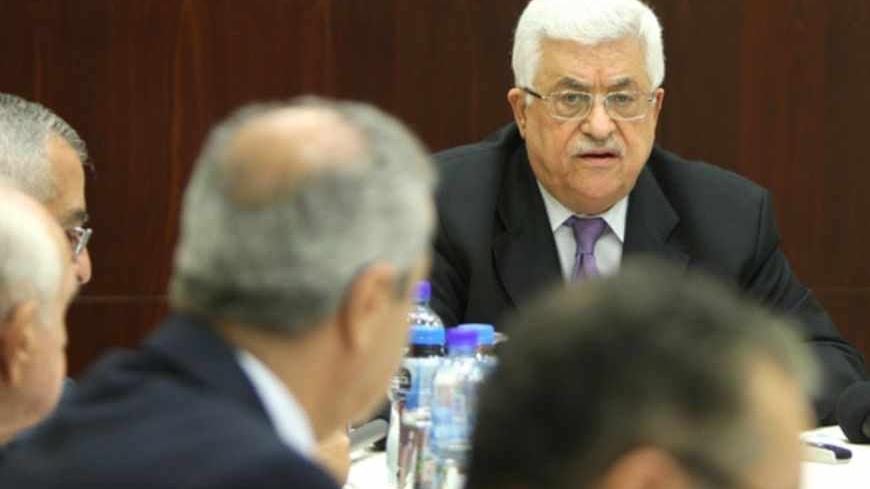 Palestinian President Mahmoud Abbas speaks during a meeting of Fatah's central committee and the Palestine Liberation Organization's (PLO) executive committee in Ramallah in the West Bank on May 13, 2012. - ABBAS MOMANI/AFP/GettyImages

The annual report for 2013 issued by the Coalition for Accountability and Integrity (AMAN) showed that corruption is still rampant inside public Palestinian institutions despite the progress during the past year. It showcased the positive and negative developments that affected corruption in various sectors, focusing on the Palestinian Authority (PA) in the West Bank, as gathering information from Gaza’s Hamas government is difficult.

The report, entitled “Corruption and Ways to Combat it,” recommended that steps be taken to re-evaluate the general structure of the PA’s institutions, reduce the number of non-ministerial public institutions and merge them into more efficient bodies as well as implement fiscal changes and put an end to the squandering of public funds.

The report also stated that the continued absence of an official framework by which conflict of interest is determined and the lack of mechanisms by which to reduce it in the public sector were the reasons behind the prevalence of the crime of graft, the most common form of corruption in Palestine.

According to AMAN, the report’s aim was to help decision makers, politicians and civil-society organizations gain insight into the pervasiveness of corruption and what is needed to combat it. This would aid in the development of laws, policies and procedures meant to combat corruption and raise the awareness of Palestinians to the dangers of all forms of corruption, including nepotism, favoritism, illegal gains from public office and the squandering of public funds. Additionally, it recommended that cooperation be encouraged with independent media outlets in order to promote transparency in the public, private and civil sectors.

While the report pointed to progress being made in the legislation of public procurement and tenders, it clarified that what is required now is the implementation of this legislation, following the establishment of a public procurement committee. The report also lauded the holding of municipal elections on the West Bank, saying the lack of electoral accountability was a primary reason for the emergence of corruption cases. It also called for presidential and parliamentary elections to be held.

Additionally, the report called for Palestinian officials who refuse to abide by the High Court of Justice’s decision to be tried for corruption, as the law prescribes. It also called for the development of implementation mechanisms and compliance with the provisions of the Code of Public Conduct, which the Palestinian cabinet in Ramallah ratified.

Among the most prominent corruption cases brought before the Corruption Crimes Court since its inception and until September 2012 were 41 cases of corruption that varied from embezzlement of public funds to money laundering, forgery, breach of trust and abuse of office for personal gain.

AMAN’s annual report noted the persistence of flaws in senior public-sector staff appointments, a marked improvement in appointment transparency in educational and health-care institutions and a decrease in wrongdoing and excesses such as nepotism, favoritism and appointments based on political and familial considerations.

Examples were given of public-fund squandering in Palestinian municipalities of the West Bank, where the total accumulated debt of municipalities and water-works agencies owed to the PA amounted to 1 billion Israeli shekels [$280 million] in the period between 1996 until 2012. Official vehicles were still being misappropriated by employees while suspicions grew concerning the running of Palestinian Airlines and the building of a mausoleum for the late President Yasser Arafat in Ramallah.

Concerning the security sector, AMAN expressed concern about the lack of a regulatory framework to govern the work of Palestinian security agencies. Its report mentioned that no laws governed the activities of national security, intelligence and police agencies, nor were each of their responsibilities adequately defined, which hinders accountability and weakens their integrity. Furthermore, some security chiefs still held leadership positions within political parties, which breaks the law requiring that security agency officials maintain  neutrality in the total absence of the Palestinian Legislative Council’s monitoring and legislative role.

The report criticized the murkiness surrounding the PA’s security budget, which accounts for nearly one third of the Palestinian public budget, because it was comprised of only one figure, without details pertaining to the nature and types of their revenues and expenses. This contradicts the General Budget Law and the official fiscal code of the Palestinian Ministry of Finance.

It stated that “incidental expense funds allocated to the security agencies always fell under the control of the agencies’ heads in the absence of a governing framework and a supervisory body tasked with enforcing it, which provides opportunities for corruption to prevail.”

The report alluded to the lack of transparency in Palestinian universities, which it accused of failing to disclose financial statements and administrative reports “in a manner that raised rumors from time to time about their budgets and the mechanisms that they used to make decisions pertaining to filling executive positions.”

AMAN also reviewed the Ministry of Health and its services, which the report characterized as being in a state of regression despite the improved transparency measures. Mention was made about the Water Resources and Energy departments and the corruption from which these two important ministries suffer.

AMAN’s report, released in April 2013, attributed a number of problems to the inability of the Palestinian Legislative Council to function as a result of the political division between the West Bank and Gaza Strip, which led to an expansion of the president’s role in issuing laws and decrees, the constitutionality of which was the subject of controversy and debate.

The PA Public Prosecutor’s office, the report noted, is not subject to oversight, which caused the government to lose most of its cases in front of the High Court of Justice as a result of erroneous decisions or actions by the office’s officials, despite the presence of legal advisers in all ministries.

Concerning political parties and Palestinian factions, the report accused them of not adopting any political programs that presented meaningful initiatives or measures aimed at combatting corruption. It stated: “The majority of Palestinian factions still follow the traditional quota system for dividing senior government positions, representative organizations' boards of directors memberships and posts in embassies abroad.”

In addition, the report spoke in depth about the tunnels that link Gaza with Egypt and the mechanisms by which they are run. It pointed out that these tunnels were not subject to oversight and that “great mystery still surrounded the revenues collected by the Gaza government through these tunnels, whether they resulted from the operations of companies owned by the Hamas government or the duties collected when goods entered the Strip through the tunnels, and particularly the duties levied by the Rafah municipality for permission to build and dig the tunnels, as well as the services offered by that municipality.”

Hazem Balousha is a Palestinian journalist based in Gaza City. He has worked as a news producer for BBC World Service, as well as contributed to Deutsche Welle, The Guardian, Al-Raya (Qatar) and other publications. Balousha covered Israel's Operation Cast Lead in Gaza in 2008 and the conflict between Fatah and Hamas in 2007. He is also the founder of the Palestinian Institute for Communication and Development (PICD), and has a masters degree in international relations as well as a BA in journalism. On Twitter: @iHaZeMi