Surveys show that Palestinians believe that corruption is increasing under the Palestinian Authority, which has not even held required presidential and parliamentary elections. 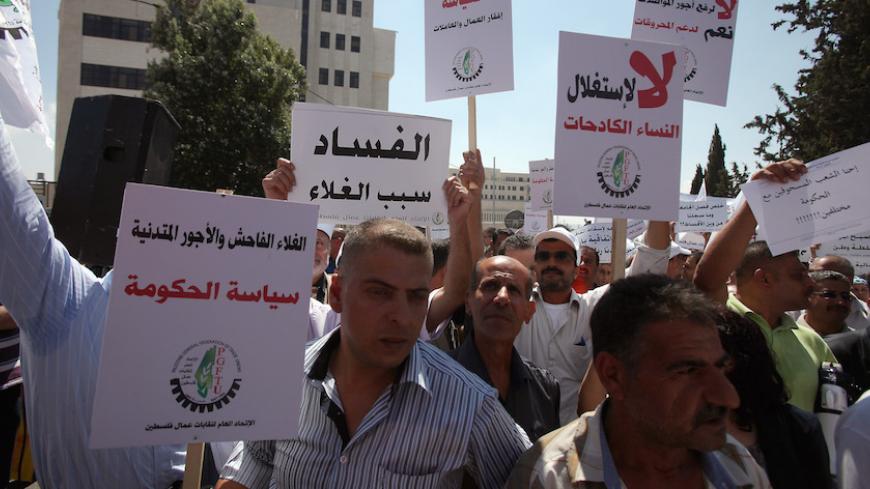 Palestinian protesters hold signs that read, in Arabic, "Corruption is the reason for high cost of living" and "High prices and low wages are the policies of the government" during a protest against the high cost of living in the West Bank city of Ramallah, Sept. 11, 2012.

RAMALLAH, West Bank — Since its inception under the Oslo Accord, fighting corruption has been one of the greatest challenges the Palestinian Authority (PA) has had to face. This is especially true in light of the dire economic conditions in the West Bank and the Gaza Strip, the absence of legislative power and its monitoring role and the absence of the presidential and parliamentary elections. As per electoral law, the elections were supposed to happen in 2010.

The PA claims to be making strenuous efforts to fight against corruption by taking several initiatives such as forming the Anti-Corruption Commission (PACC), joining the United Nations Convention against corruption in May 2014 and approving the national strategy to combat terrorism for the years 2015 to 2017. Yet, reports and Palestinian public opinion suggest that corruption remains rampant at all the PA institutions’ levels.

During the Coalition for Accountability and Integrity (AMAN) gala, organized to launch its annual report on April 27, which Al-Monitor attended, Prime Minister Rami Hamdallah delivered a speech.

AMAN was established in 2000 upon an initiative by a number of Palestinian civil society organizations working in the fields of democracy, human rights and good governance as a movement aiming to combat corruption and enhance the values of integrity and principles of transparency and systems of accountability in Palestinian society.

“The PA continues to fight against corruption, working on eradicating it, further promoting integrity, transparency and the government’s openness to various regulatory authorities,” Hamdallah said.

He added, “The government institutions — be they ministerial or nonministerial — will continue to be subject to accountability and supervision. … The rampant corruption and the ongoing occupation lead to more looting of people’s funds and capabilities, disrupting the establishment of an independent state otherwise capable of surviving.”

AMAN’s annual report titled “Absolute Power, Total Corruption” said that “the divisions, the occupation policy, the absence of the Legislative Council, the president’s monopolization of the three powers and weak monitoring have led to several cases of corruption.”

For his part, AMAN’s Commissioner-General Azmi Shuaibi told Al-Monitor, “The cancellation of elections and the absence of the Legislative Council led to the president’s monopolizing the three powers — legislative, judicial, executive — which has served as fertile soil for some cases of corruption.”

Al-Monitor looked over the annual report, which stated that the absence of the Legislative Council and the failure to make new laws or amend the existing ones rendered those laws inconsistent with the UN Convention Against Corruption, which Palestine joined on May 2, 2014.

AMAN’s acting director, Essam al-Haj Yassin, told Al-Monitor, “In light of the president’s monopolization of the three powers, the recommendation to the parties involved is to work toward holding the Legislative Council session, which would end this monopolization.”

For his part, Jihad Harb, writer and political researcher and analyst in corruption issues, told Al-Monitor, “Signing the anti-corruption agreement depends on the PACC and the government actions in activating the agreement’s items. This would hold the Palestinian state accountable when it comes to the extent to which it is applying the agreement’s provisions.”

In the same vein, the vice president of the Legislative Council, Hassan Khreisheh, told Al-Monitor “The absence of the council for years has pushed some to take up its role. The government, for instance, formed a committee to issue legislation, while the president’s advisers contributed to the enactment of legislation by urging him to pass presidential laws that worked to the advantage of certain beneficiaries.”

“The Legislative Council did not approve any of the government’s budget; that is why people are complaining about the fact that security agencies have been allocated 35% of the general budget,” he said.

AMAN’s report focused on the main decisions highlighting the president’s monopolization of the three powers. “The president granted the government of national reconciliation confidence on behalf of the Legislative Council. He passed the 2014 budget, lifted immunity of one of the council’s members, Mohammed Dahlan, referred [Secretary-General of the Palestinian Legislative Council] Ibrahim Khreisheh to the General Personnel Council and forced the chairman of the State Audit and Administrative Control Bureau into early retirement, which is the competence of the council. The president also appointed the president of the Supreme Judicial Council himself without waiting for the recommendation of the Judicial Council."

As for the PA’s efforts in this context, a legal expert who refused to be named told Al-Monitor, "Judicial authorities are neglecting following up on cases of corruption. The president amended the law on illicit profit, which diluted the law in terms of prosecuting offenders."

The source also said that there are real problematic issues in settling corruption cases in the Corruption Crime Tribunal, as the committee is late in following up on them, which leads to a delay in the issuance of the pertinent laws. This is not to mention that some papers have gone missing within the confines of the court building.

Nepotism and favoritism were among the most prominent forms of corruption, according to the Transparency International 2014 survey.

The survey showed that 6% of Palestinians in the West Bank paid bribes to receive public services, compared with 19% in Gaza. Moreover, 70% of Palestinians believe that corruption has increased in 2014.

According to the report, the results of Global Corruption Barometer "GCB 2014" on Palestine show that 35% of Palestinians believe that corruption ranks third among the problems that the government must be dealing with, after the economy and governance, and that 61% of respondents believe that the government's efforts in the fight against corruption are futile or somewhat futile.

Furthermore, the complaints and reports submitted to the PACC numbered 450 until Nov. 30, 2014, 125 of which were excluded for being irrelevant. It should be noted that 20% of the submitted complaints were about nepotism and favoritism, 17% concerned abuse of power, 13% the appropriation of public funds and 12% abuse of funds.

The absence of the legislative and regulatory authority, the disruption of the presidential and legislative elections and the failure to approve a participatory national plan to promote integrity and combat corruption — not to mention the failure to complete the legislation promoting transparency including the law of access to information, the law of public procurement and concession and the law of prevention of monopoly — will remain obstacles in the fight against corruption.