A Tunisian nonprofit and independent watchdog launched a center to support and guide victims of corruption, to encourage citizens to report administrative and financial corruption, and to create a favorable climate to promote accountability. 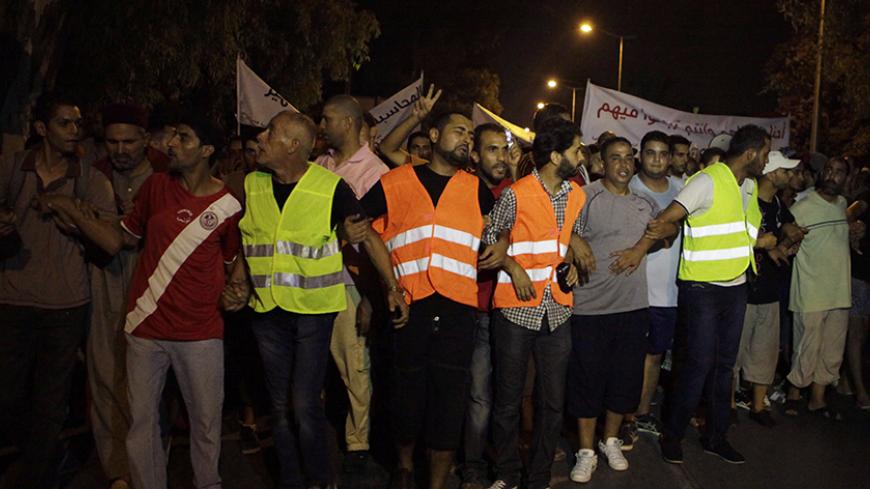 Protesters walk during a peaceful protest calling for the elimination of corruption and bribery outside the presidential palace in Carthage, in Tunis, Aug. 16, 2012. - REUTERS/Zoubeir Souissi

The 2015 Corruption Perceptions Index, which was released by Transparency International in January, revealed that Tunisia’s index fell to 38 — on a scale of 0 (highly corrupt) to 100 (very clean) — compared to 40 in 2014. Based on these figures, it seems that Tunisians’ hope that their country would be free of corruption, nepotism and bribery after Zine El Abidine Ben Ali’s departure in 2011 faded. In this context, the chairman of the National Anti-Corruption Authority, Chawki Tabib, said in March, “Five years into the revolution, corruption indicators in Tunisia have risen.” According to the Corruption Perceptions Index for 2010, Ben Ali’s last year in power, Tunisia ranked 59th, but it moved to 76th place in 2015.

According to the report “People and corruption: Middle East and North Africa survey 2016," which was published by Transparency International in May, 64% of Tunisians believe that corruption is on the rise. This prompted Tunisian civil society to combat the phenomenon, raise awareness about the risks on the economy and civil peace, and encourage affected parties to reveal the identities of persons involved in corruption acts by helping them prepare their complaints and resort to the judiciary to reduce impunity rates.

In this context, I Watch — a Tunisian nonprofit organization and independent watchdog aimed to fight financial and administrative corruption and promote transparency, founded by a youth group in March 2011 after the fall of Ben Ali's regime — opened on July 14 a center for the support and guidance of victims of corruption.

On its website, I Watch indicated that the center was established “with the support of Transparency International in the framework of the two organizations’ endeavor to encourage citizens to report administrative and financial corruption acts and create a favorable climate to promote accountability and reduce impunity.”

Hinda Fallah, the center’s project coordinator, told Al-Monitor, “Our center is part of a chain of centers in more than 60 countries in the world. It is the second center established in North Africa, with one in Morocco. It aims to support the public in fighting against corruption in Tunisia by seeking to create cooperation relations with the various official authorities and civil society components to draw attention and highlight the corruption issues and phenomena that raise the public concern. It also aims to support the academic and legislative anti-corruption framework, locally and regionally.”

In regard to the center’s mechanism of action, Fallah said, “The center helps whistleblowers and victims of corruption in drafting their complaints, follows up on their cases and investigates the provided data to get to the bottom of things. It also seeks to improve the legal framework of the fight against corruption and endeavors to engage the various parties to find appropriate solutions to consolidate the values of integrity and transparency in the public and private sectors. The center allows all citizens — without discrimination and distinction — to report all acts of corruption, such as bribery, tax evasion, excess of power and waste of public money. The center also offers legal advice and assistance in judicial proceedings as the case may be.”

She added, “After receiving complaints, we start investigating and inquiring about the raised cases of corruption and we contact the concerned authorities. These services are offered free of charge by a group of legal experts who are given a license for the processing of personal data from the National Authority for the Protection of Personal Data. The center’s legal counsel subsequently examines the complaints depending on the order in which they were submitted. Urgent cases, where the safety of the whistleblower is threatened, are handled on an exceptional basis. Within at least 15 days, the center’s team provides the whistleblower with an answer. We do not follow up on any unsubstantiated complaint of corruption. The whistleblower in this case shall be notified and guided toward other relevant authorities, if any.”

Through this mechanism of action, the center assumes the role of an intermediary between the citizens affected by financial and administrative corruption and the government and judicial authorities. The free and open legal and advisory services allow numerous people to report cases of corruption and facilitate their reporting process away from the bureaucracy adopted by the official state institutions.

The Tunisian government created a website to facilitate the reporting processes. But the citizens’ will and enthusiasm to report and combat corruption are always hindered by fear of reprisals. Transparency International’s report pointed out that most citizens in Tunisia say that fear of retaliation is the main reason why people do not report incidents of corruption. The report also called on establishing safe reporting mechanisms, so that people can report cases of corruption without fear of reprisal.

In this context, I Watch submitted to parliament a proposal for a draft law on the protection of whistleblowers, after obtaining a sufficient number of parliamentarians’ signatures on a petition in this regard.

Tunisian civil society has been recently mobilizing all of its energy to fight corruption in the country. In addition to I Watch, other civil society groups are also active in fighting corruption, and they launched social media campaigns, most notably “Manich Msamah” ("No to reconciliation"), which fights the economic reconciliation bill proposed by President Beji Caid Essebsi.

This bill aims to suspend trials and drop penalties against public officials and businessmen in crimes related to financial corruption and abuse of public money.

Citizens are fed up with the failed government policies and political forces and have lost faith in both the government and the opposition, which have been preoccupied with the formation of a national unity government since June.