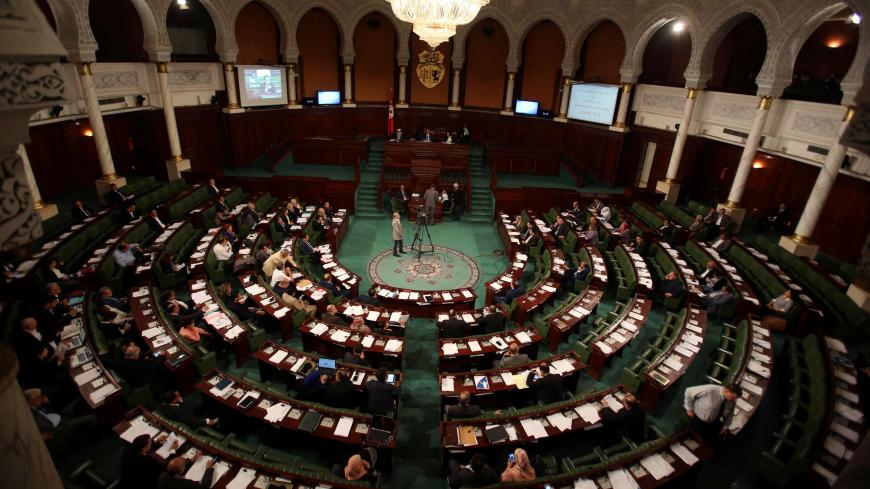 A general view shows the Assembly of the Representatives of the People in Tunis, Tunisia, May 10, 2016. - REUTERS/Zoubeir Souissi

As part of Tunisia’s efforts to combat corruption, the parliament approved a law in July requiring a group of Tunisians to disclose their holdings and business interests. The law, which forces officials to declare their assets, entered into force on Oct. 16.

The Tunisian Anti-Corruption Commission was established by the Tunisian government in November 2011 to fight corruption in the name of “supporting transparency and consolidating the principles of integrity, neutrality, accountability, combating illicit enrichment and protecting public funds.”

Chapter V identifies those compelled to declare their property and profits as the head of state, ministers and senior government officials, the Supreme Council of the Judiciary, the Constitutional Court, judges, mayors, secretaries of trade unions, parties and associations as well as owners of media institutions.

Chawki Tabib, head of the Tunisian Anti-Corruption Commission, told Al-Monitor he hopes the law will promote a culture of transparency and limit corruption, saying, “As of Oct. 23, we have received 57 declarations of profits, a very small number compared to the number of people required to make declarations under the new law, which is about 350,000 officials.”

He added that those who have so far declared their assets include “two ministers, the secretary-general of the leftist Workers Party Hamma Hammami, deputies in parliament, heads of associations, some state employees and a number of judges.”

Tabib noted, “Currently, the concerned individual is required to submit his declaration in person at the commission’s offices. In order to facilitate the process, we will soon launch an electronic platform that allows those affected to complete the form and submit it online.”

He added, “I believe this online process will make it easier for many officials to comply with the law and declare their profits and properties, as well as the property of their spouses and their children inside and outside the country.”

Chapter V also states, “Persons who are obliged to declare their profits and interests shall do so no later than 60 days from the date of the announcement of the final results of the elections or from the date they are appointed or assigned duties.”

In the most recent Corruption Perception Index published in February 2018, Tunisia's transparency score was 42 in 2017 (0 being highly corrupt and 100 being very clean), gaining one point on the year before.

Real Estate Court judge Ezzeddine Abu Gleida told Al-Monitor, “This law cannot reduce the rate of corruption in the short term unless it has the means to implement it properly, given the large number of people who are obliged to declare their profits. The Anti-Corruption Commission needs a great deal of human and financial resources to process declarations and verify the properties.”

He added, “According to Chapter VIII of the law, the commission needs to build a database of all the people required to declare their profits. The commission must also continue to mandate these declarations for 10 years after they leave office to keep track of their profits and see whether they have used their past connections for financial gain. This all eventually depends on the government’s political will. But in the long run, the law will be a cornerstone of the state's anti-corruption strategy.”

Abu Gleida pointed out that the law’s current form contains loopholes, noting, “The declaration of profits is limited to a narrow family nucleus such as spouses and children, in accordance with Chapter VI, allowing the embezzlement of public money through persons not mentioned in the text of the law, such as looser kinship circles. The law also threatens to breach personal data security by publishing declarations without taking into account personal data protected by the constitution and international treaties.”

Article 24 of the Tunisian Constitution states, “The state protects the right to privacy and the inviolability of the home, and the confidentiality of correspondence, communications and personal information.” Another law protecting personal data in the country has been enforced since 2004, and the National Authority for the Protection of Personal Information, an independent public body, has been charged with protecting personal data since 2007.

Corruption in Tunisia has had a hefty economic price. In an interview with Jeune Afrique on Sept. 24, Tabib revealed, “The cost of corruption in the country is estimated at 54% of GDP.”

Rampant corruption seriously threatens Tunisia’s reputation among local and foreign investors. Meanwhile, the private sector is in dire need of investment amid a crippling economic crisis created by the inflation of salaries and the losses endured by government banks. However, this new law cannot reduce corruption without a true political will to properly implement it.