Egypt’s revolutions have not stopped corruption

Corruption in Egypt is still increasing, despite the January 25 Revolution's call for a better society, mainly due to a lack of oversight by concerned parties and government organizations. 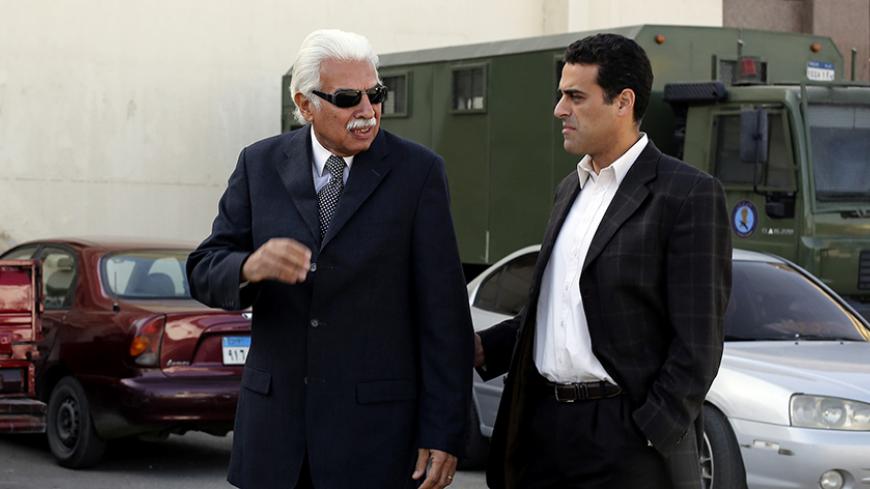 Former Egyptian Prime Minister Ahmed Nazif (L) walks with his son outside of a court after his trial was delayed, in the outskirts of Cairo, Dec. 29, 2014. Nazif is facing a retrial following his conviction in a corruption case for which he had been held since the revolution that toppled Hosni Mubarak. - REUTERS/Asmaa Waguih

“Bread, Freedom, Social Justice” — these were the three demands that constituted the pillars of the Jan. 25, 2011, revolution in Egypt. In its wake, the Egyptians wanted to build a democratic society free of corruption, where the personal interests of officials were not prioritized over the public interests of citizens.

Today, a question poses itself, “Have corruption rates changed in the various Egyptian institutions since the revolution?”

At first, Osama Diab, a researcher in the anti-corruption department in the Egyptian Initiative for Personal Rights Center, told Al-Monitor, “Corruption is defined as the misuse of public power for private benefit.” He asserted that it is almost impossible to measure the extent of corruption in any sector in Egypt due to the lack of transparency in state institutions.

The CPI classified countries only on the public sector and relied on the opinions of experts and specialists in business, politics and economics when publishing its results, according to TI’s website.

Diab said some expert opinions were based on political circumstances in the country, which explains the improvement in Egypt’s ranking in the 2014 index, as the situation was expected to improve after the election of Field Marshal Abdel Fattah al-Sisi as president. Nevertheless, Egypt still scores less than 50 points every time, which means that corruption is still high.

The latest report on underdeveloped countries (including Egypt), which TI published in December 2014, took into consideration the funds smuggled abroad between 2003 and 2012 for each country. The report mentioned that in 2011 Egypt had its highest rate of smuggled money, which reached $5.3 billion, and Egypt was classified as 25th among the countries that transferred illegal funds abroad for that year.

The same report indicated that the smuggling operations persisted in 2012, with the amount of illegal fund transfer exceeding $5 billion (around 36 billion Egyptian pounds).

In terms of internal oversight organizations, the Central Auditing Agency (which handles legal and financial monitoring, as well as performance assessment) and the Administrative Prosecution Authority (which investigates financial and administrative corruption) are among the prominent oversight systems in Egypt.

Assem Abdel Moati, former deputy of the Central Auditing Agency and head of the Egyptian Center for Transparency and Anti-Corruption (ECTAC), told Al-Monitor that 2014 witnessed the squandering of between 170 billion and 200 billion Egyptian pounds (around $28 billion) yearly of the general budget. This is to say that 800 billion Egyptian pounds (around $111 billion) — or 25% of the budget — was lost to corruption since the revolution.

The head of the Central Auditing Agency, consultant Hisham Geneina, said in an interview with Nile News channel that the financial and administrative corruption in Egypt amounts to 200 billion Egyptian pounds annually (around $28 billion).

During Hosni Mubarak’s rule, the Administrative Prosecution Authority in 2010 investigated 76,709 corruption cases related to administrative and financial violations. In 2011, after the revolution and during the rule of the military council, the cases amounted to 70,348. Moreover, there were 23,567 cases of financial violation involving stealing and damaging public money.

The corruptian cases that were investigated in 2013, according to the official spokesman for the administrative prosecution’s committee, consultant Abdel Nasser Khotab, reached 151,000 cases, recording an increase of 80,000 cases compared with 2012 and more than double the number compared with 2011.

The question remains, “Why is corruption on the rise in Egypt, even after the revolution?”

Al-Monitor contacted several specialists in civil communities who work on corruption and monitoring of the state institutions’ work, who had various opinions about this. But they all agreed on the following reasons behind the corruption in Egypt.

Laws allowing the potential for corruption have been issued. Deposed President Hosni Mubarak sought to maintain this reality, which did not end with the collapse of his regime. The current authority is still practicing the same measures. One of the most recent examples was Sisi’s issuance of amendments to the anti-monopoly law on July 3, 2014. One of the articles of the law stated that the Egyptian Competition Authority (ECA) can stop implementing the anti-monopoly law if there is a higher interest for the consumer. The article did not specify the notion of public interest it did not elucidate whether monopolization or its prohibition was better for the consumer.

According to Diab and Moati, the law in general is either not implemented, and subsequently, violators of the public interest are not punished. Or, the law is selective; it is applied to some people, while others who are luckier or more influential get off the hook.

There hasn’t been a parliament monitoring the government’s work in Egypt since the January 25 Revolution, except once in January 2012. But, this parliament was disbanded as per a judicial verdict during Mohammed Morsi’s rule. This gave the successive presidents the chance to issue laws and exploit the absence of accountability by the members of parliament.

Moreover, the Egyptian authorities are currently tightening the noose on civil society organizations, some of which address corruption issues. The people working in these organizations are either pursued by the security apparatus or are subject to laws that prevent them from resuming their work. This happened when Sisi issued a decision to amend Article 78 of the Penal Code, which imposes strict sanctions on people receiving money from foreign parties.

Despite the autonomy that the Egyptian Constitution granted to the oversight bodies, the heads of these bodies are appointed by a presidential decree. This protects the president and other officials from accountability.