Egyptian activists target corruption but should they be focused on political issues?

Egyptian youths are focusing their efforts to unveil corruption cases, as a recent study revealed the squandering of about $100 billion per year. 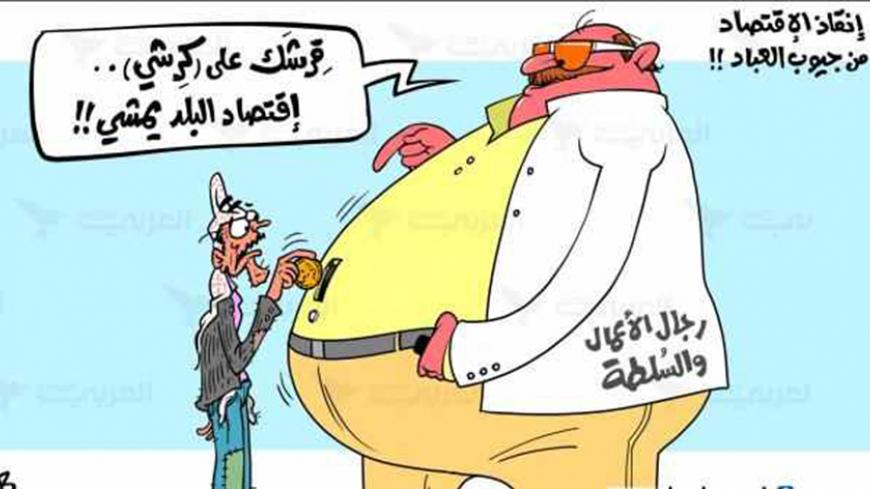 CAIRO — A new youth campaign called Emsek Kersh was launched on Facebook on Aug. 28 with the aim of exposing the corruption plaguing the various state institutions across the Egyptian governorates.

The campaign coincided with the emergence of a major corruption case whereby former Agriculture Minister Salah Hilal was arrested Sept. 7, along with former member of parliament Hamdi el-Fakharany, who was detained Sept. 6 on charges of receiving a bribe in return for dropping a lawsuit to claim back a company land he had sold.

Despite the disclosure of this case, the ongoing efforts to fight corruption will not be limited to official efforts but also include youth efforts. Chief among these is the Emsek Kersh campaign. However, there are still restrictions that may hinder the work of the campaign, most notably the widespread corruption and the lack of law enforcement.

Young Egyptian journalist Mohamed Hamza launched, along with 17 young men — half of whom are journalists ages 17-26 — the popular campaign Emsek Kersh, which is a popular expression symbolizing the rampant corruption and the huge amounts of illegal profits.

Despite the emergence of similar youth campaigns, such as WikiCorruption in April 2015 and Egyptians Against Corruption in 2011, the campaign succeeded in drawing attention after it exposed several corruption cases involving businessmen and officials in the country.

Campaign founder Hamza told Al-Monitor about the objectives of the campaign, saying, “The campaign aims to create a corruption-free society, especially after the deterioration of the economic situation in Egypt due to corruption.”

As for the implementation mechanism, Hamza pointed to the “journalistic experience in the field of corruption detection, especially considering that 50% of the campaign members are journalists who are working on corruption cases.”

He added, “These [journalists] have close relations with civil servants in the various administrative bodies and the remaining members are being trained on the detection of corruption cases. This is being carried out through the press apparatus of the campaign."

Hamza pointed to a number of cases unveiled by the campaign, including the issue of corruption in the Suez governorate, whereby it was reported on Sept. 15 that three businessmen collaborated with officials in the province to steal 10 billion Egyptian pounds ($1.2 billion) from the state. Also, on Sept. 5, reports came out that a businessman seized a quarter of the Nile watercourse in the Qalyubia governorate.

Hamza pointed to the steps they are taking to expose corruption, and said, “We expose them in the media and then communicate with officials to take action against those involved.”

The campaign revealed a control report issued on Sept. 30, 2014, by the Administrative Control Authority. Five months before the arrested former agriculture minister was appointed March 1, the report had warned former Prime Minister Ibrahim Mehleb against the designation, which resulted in the agriculture minister exploiting his powers to issue an approval to build an illegal fence.

Hamza highlighted “the role of the campaign in the detection of the Ministry of Agriculture’s corrupt acts in conjunction with the state's role in exposing the corruption of the same ministry.”

Hamza confirmed that they will assist the new government in fighting corruption “by submitting an agenda to each ministry, meeting the concerned officials and delivering the agenda to them.” The agenda will include a set of commandments, “most notably abolishing the Egyptian bureaucratic red tape that obstructs the interests of investors, finding a solution to the laws’ crisis and proceeding to community dialogue.”

Hamza warned against a hunger revolution in Egypt as a result of the continuation of corruption and the widening gap between the rich and the poor.

He added, “After June 30, the efforts and actions taken to fight corruption have dragged Egypt from the 114th place in the list of global corruption to the 94th. Corruption still exists and it cannot be eliminated overnight.”

Osama Mourad, former president of the Advisory Board of the Integrity and Anti-Corruption Program, told Al-Monitor, “The problem with popular campaigns is that they focus on those who earn money, a common mistake that many people make."

He said, "The government change indicates the seriousness of the state in fighting corruption, but that does not mean that corruption will indeed be fought. Because it is a comprehensive system that requires an administrative revolution.”

Rashad praised the efforts of the campaign and said, “The world is changing thanks to the efforts of civil society, especially when there is cooperation with the media, and this is the case with the Emsek Kersh campaign that embarrasses the government.”

He advised coordination among all popular initiatives so that tangible results can be achieved, and called for “the involvement of the judicial police of the regulatory agencies similarly to their involvement in the confrontation of terrorism in Egypt.”

Despite the two Egyptian revolutions that took on rooting out corruption, interest in the political situation and political instability over the past years have overshadowed the issue of corruption in the successive governments. This coincided with the decline in economic growth rates, which dropped to 4.3% in January 2015.

Consequently, some youth began to focus on community issues that affect citizens, such as corruption, instead of demanding to change or abolish the protest law issued on Oct. 13, 2013, and which undermines the people’s freedom of assembly. However, the question is whether some young people will manage to fight corruption in light of their limited capacity.