What Exxon's Rex Tillerson might mean as secretary of state 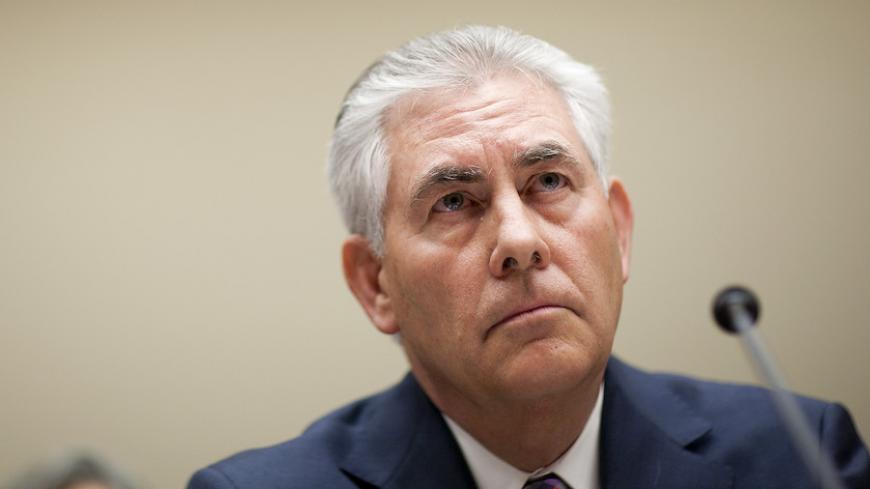 Rex Tillerson, chairman and CEO of ExxonMobil, testifies about the company's acquisition of XTO Energy before the House Energy and Environment Subcommittee on Capitol Hill in Washington, Jan. 20, 2010. - REUTERS/Joshua Roberts

WASHINGTON — ExxonMobil CEO Rex Tillerson, a four-decade employee of the energy giant, is President-elect Donald Trump's nominee to be secretary of state. While Democrats and some Republican lawmakers expressed concern about his extensive business dealings in Russia, as well as his lack of formal diplomatic experience, several former diplomats said Tillerson brings significant global experience negotiating in complex environments, and suggested that a “gap” between the Washington foreign policy and business communities could explain misunderstanding of Tillerson’s experience.

James Jeffrey, a former US ambassador to Iraq and Turkey who has served as an adviser to Exxon, said Tillerson knows the Middle East as well as any diplomat.

"Business leaders of Tillerson's caliber and international experience have had great success in diplomacy,” Jeffrey, now a senior fellow at the Washington Institute for Near East Policy, told Al-Monitor. “He knows the Middle East and its leaders as well as anyone.”

“Basic policy there will be decided by Trump with all of his advisers, including Tillerson,” Jeffrey added. “But Tillerson can be counted upon to execute it well."

Tillerson, 64, born in Wichita Falls, Texas, in 1952, joined Exxon in 1975 as a production engineer, and has served his whole career there. In 1995, Tillerson became president of Exxon Yemen, according to his company biography. In 1998, he became a vice president of Exxon Ventures (CIS) and president of Exxon Neftegas Limited, which operated in Russia. He was named chairman and CEO of ExxonMobil in 2006.

In 2011, Exxon created a partnership with Russia’s Rosneft to explore for oil in Russia’s Arctic. In 2013, Russian President Vladimir Putin awarded Tillerson the Order of Friendship. A Wall Street Journal profile this month said that the only American who has had more face time with Putin than Tillerson is Henry Kissinger.

That Russia part of his career, coming amid recent allegations that the US intelligence community assesses Russia interfered in the US election to harm Hillary Clinton and help Trump, has made initial Democratic reactions to the Tillerson nomination chilly.

“Rex Tillerson is not qualified to be secretary of state, and the Senate should not confirm him,” Rep. Eliot L. Engel, ranking Democrat on the House Foreign Affairs Committee, said in a statement Dec. 13 typical of Democratic lawmaker reactions to the nomination. “Aside from his utter lack of diplomatic experience, Mr. Tillerson’s cozy ties to Vladimir Putin and Russia would represent an untenable conflict at the State Department. Especially in light of mounting evidence that Russia interfered in our election to aid President-elect Trump, it’s unthinkable that Mr. Tillerson should become our top diplomat.”

Concerns about Tillerson’s Russia ties were also expressed by some Republicans.

"I do have some legitimate … concerns about Mr. Tillerson," Sen. John McCain, R-Ariz., the chairman of the Senate Armed Services Committee, said in a radio interview Dec. 13 with the Family Research Council. "I believe that after Ukraine, he opposed the sanctions that were put on Russia. He has a very close relationship with Vladimir Putin. By the way, he was given an award by Vladimir Putin. It was sanctioned by Vladimir Putin. That concerns me a great deal."

"Frankly, I would never accept an award from Vladimir Putin, because then you kind of give some credence and credibility to this butcher, this KGB agent, which is what he is," McCain added.

Those allegations of unfitness and ties to Russia that are too cozy seem overblown, said Suzanne Maloney, a former State Department Iran expert who previously worked at Exxon.

“I think this is someone who has real, on-the-ground, operational experience all over the world, but certainly in a number of places where America has national interests at stake and considerable tensions,” Maloney, now deputy director of the Brookings Institution foreign policy program, told Al-Monitor.

“This is clearly someone who knows how to manage a bureaucracy, [and] has dealt with unexpected crises,” Maloney said. “He comes from a corporation that could not be more obsessed with principles and adherence to US law. On all those grounds, I am cautiously optimistic.”

But she added that the confirmation process will matter and it will be important for him to explain his extensive dealings for Exxon in Russia, which were important to building his career.

“Tillerson was always known as someone who built his career on sort of launching important ExxonMobil business in Russia,” she said. “It is an important element of his background and crucial in the way he rose through the company — his time in Russia, building the business in Russia was very important.”

“But I feel the press made a leap [from that business into suggestions of him having a] personal affinity or ideological interest in Putin,” Maloney said. “It is possible, but I don’t think there is any evidence.”

“Business people do business all over the world, and they are not looking for friends,” Maloney said. “Trust and mutual respect are important. But so are adherence to contracts and strict compliance with American law.”

Former US diplomat Frank Wisner agreed that Tillerson’s experience with Russia could help to get relations between the two countries on a better footing.

US policy toward Russia “can’t just be based on sanctions and NATO buildup,” Wisner said. “We have to find a political basis to manage this relationship.”

The portrayal of Tillerson as somehow being in Putin’s pocket or as Putin’s lapdog is “ridiculous,” Wisner said.

For his part, Putin’s foreign policy adviser, Yuri Ushakov, expressed positive views of the appointment. Tillerson “is a solid and very professional person,” and the Kremlin values his views and opinions, Ushakov was cited as saying by Russia’s Interfax News agency Dec. 13.

Russian analyst Dmitri Trenin also sounded positive about the appointment and what it might mean.

Trump “has definitely decided to do a reverse Nixon and side with Russia against China,” David Goldwyn, a former State Department energy envoy, told the New York Times on Dec. 12. “He thinks we probably can make common cause with Russia in Syria but also in Libya, and he doesn’t have a problem supporting strongmen.”

Tillerson, in his role at Exxon, has done the kind of complex corporate diplomacy with foreign leaders that in many ways parallels the skills and relationships of experienced diplomats, said energy executive and attorney Amir Handjani.

“As the CEO of ExxonMobil, he is at the helm of the largest publicly traded energy company in the world,” Handjani, Middle East director of RAK Petroleum, told Al-Monitor in a phone interview from the United Arab Emirates. “There are maybe only a handful of global heads of state that have had the access and experience that Rex Tillerson has had negotiating complex transactions.”

“Even though he has not had political experience, he has had more experience dealing with heads of state and with sovereigns than many politicians, senators, think tankers and foreign policy pundits,” Handjani said. “The fact that he can negotiate with someone like Vladimir Putin and Hugo Chavez is an asset, not a liability.”

Several Gulf nations have had extensive dealings with Exxon, Handjani noted. “Exxon is the largest player in Qatar. It brought LNG to export and is the largest investor there. It pays the largest tax bill in Saudi Arabia. They are big players in Abu Dhabi.”

Iran would also like Exxon to return, Handjani said. “Iran badly wants Exxon to come back in,” Handjani added. “Exxon coming into Iran [would be] an affirmation of brand USA. Energy has outsize importance in the Iranian economy.”

In his role at Exxon, Tillerson “has been someone who has consistently been against sanctions,” Handjani added. “He believes they serve a political purpose, and that they hurt American companies … to the benefit of their Asian and European counterparts.”

Wisner added, “Let’s think about the chairman of ExxonMobil. They manage huge enterprises. They are spread globally. There is not a government in the world upstream or downstream that their operations do not touch.”

The former diplomat said, “They have therefore a very sharp appreciation of the political situation and the economic condition of virtually every country in the club. They are negotiators. They are people who are intimately acquainted with our political system. … So you know he is bringing to the table a briefcase full of relevant, useful background.”