Portraying himself as a clear-eyed realist, Rex Tillerson showed keen insight into Russia but faced tough questions from senators, both Republican and Democrat, on whether he would stand up for American values. 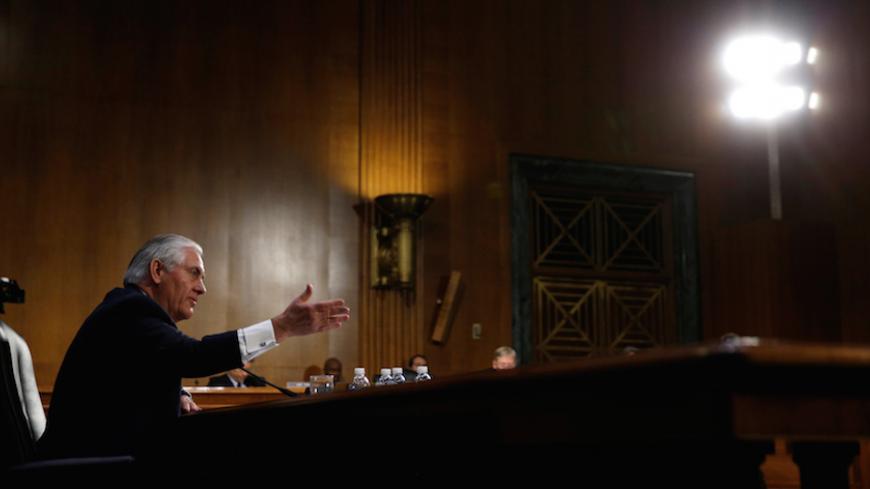 Rex Tillerson, the former chairman and chief executive officer of ExxonMobil, testifies during a Senate Foreign Relations Committee confirmation hearing to become US secretary of state, on Capitol Hill in Washington, Jan. 11, 2017.

WASHINGTON — President-elect Donald Trump’s nominee for secretary of state, Rex Tillerson, enduring some nine grueling hours of questions at his nomination hearing Jan. 11, said the Trump administration’s top foreign policy priority would be to defeat the so-called Islamic State (IS). Tillerson, the chairman and 41-year veteran of ExxonMobil, also suggested the Trump administration might be inclined to keep the Iran nuclear deal, while reviewing it to ensure strict compliance and enforcement, and may seek to negotiate a possible follow-on agreement to ensure Iran never obtains a nuclear weapon.

“There are competing priorities in this region … but they must not distract from our utmost mission of defeating [IS],” Tillerson told the Senate Foreign Relations Committee in his prepared testimony.

Facing some of the toughest questions from Sen. Marco Rubio, R-Fla., about his views on Russian foreign policy aggression and rights abuses, Tillerson demurred from agreeing to characterize Russian President Vladimir Putin as a war criminal, while saying the United States should have behaved more assertively when Russia seized the Crimean Peninsula from Ukraine in 2014.

"I would not use that term," Tillerson responded.

After another exchange with Rubio about women’s rights in Saudi Arabia, Tillerson tried to explain that he supported the same values as Rubio, but saw merit in taking a less heavy-handed approach in pursuing them in other nations.

"There seems to be some misunderstanding," Tillerson told Rubio. “I share the same values that you share."

“There is change underway in the Kingdom of Saudi Arabia. … It is moving in the direction that we want it to move,” Tillerson said. “What I would not want to do is take some precipitous action that [might cause them to] interrupt … making … that progress.”

Portraying himself as a clear-eyed realist and former engineer who looks at the facts, Tillerson expressed skepticism at US-driven regime change efforts, and said he considered it would be his job as the nation’s top diplomat to develop the options to avoid the need for that.

“Any decision to affect a change of leadership in a country by force cannot be taken lightly,” Tillerson said in response to questions from Sen. Rand Paul, R-Ky., a libertarian skeptical of US military interventions. “The question is, what comes next?”

“My job is to make sure we never get there … to chart out other pathways by which we can have steady progress to cause regimes … to change their behavior,” Tillerson said.

Tillerson, who faces scrutiny from senators for his extensive work in Russia for Exxon, expressed insights into how Russia sees the world, but did not suggest he was inclined to be a pushover for Putin. He also faulted the Barack Obama administration for unintentionally inviting Russian aggression in Ukraine and Syria by failing to uphold the red line to use force to punish the Syrian regime for its use of chemical weapons.

“We must also be clear-eyed about our relationship with Russia,” Tillerson wrote in his prepared testimony. “Russia today poses a danger, but it is not unpredictable in advancing its own interests. It has invaded Ukraine, including the taking of Crimea, and supported Syrian forces that brutally violate the laws of war.

“But it was in the absence of American leadership that this door was left open and unintended signals were sent,” he wrote. “We backtracked on commitments we made to allies. We sent weak or mixed signals with red lines that turned into green lights. We did not recognize that Russia does not think like we do.”

Tillerson showed less familiarity with the Iran nuclear deal, at one point telling Sen. Chris Coons, D-Del., that under the landmark agreement, which went into effect last year, Iran could purchase a nuclear weapon but not develop one. Tillerson later acknowledged that he had “misspoke,” and said he had learned during the break that Iran was prohibited, both as a signatory to the Nuclear Non-Proliferation Treaty and under the Joint Comprehensive Plan of Action (JCPOA), from ever seeking or acquiring a nuclear weapon.

Tillerson suggested the Trump administration would undertake a review of the JCPOA and pursue vigorous enforcement in the medium term. In the longer term, it might seek to negotiate some sort of follow-on agreement with Iran, he suggested.

“As for the nuclear agreement, I do look forward to take a comprehensive look at that, alongside with the side agreements … to stay informed on their activities … are they complying with all the inspections requirements,” Tillerson said.

“What happens here at the end of this agreement,” Tillerson said. “The objective has not changed. Iran cannot have a nuclear” weapon.

The Trump transition media team did not respond to an emailed query from Al-Monitor about who had briefed Tillerson on Iran for the nomination hearing.