Russian Deputy Foreign Minister Sergey Ryabkov has played a highly constructive role in helping to advance an Iran nuclear deal despite tensions between the Kremlin and the West. 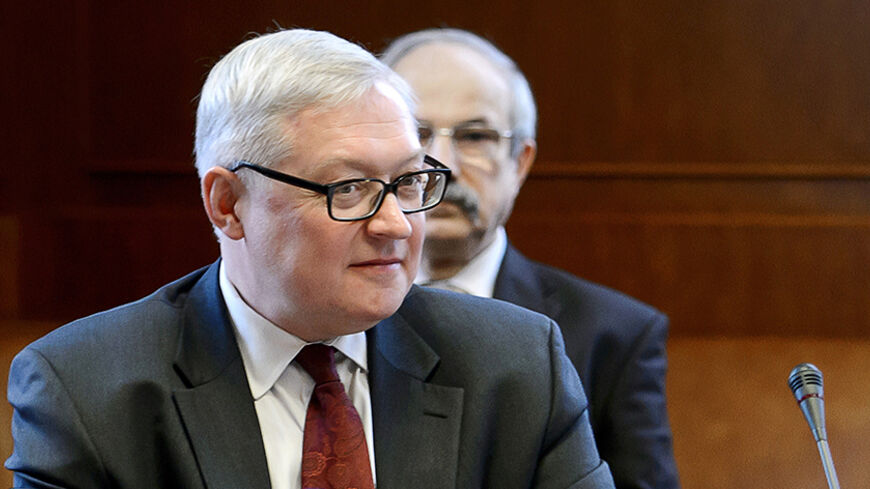 When Russia and Iran last month announced that they had signed a contract for the Russian nuclear energy firm Rosatom to build more nuclear power reactors in Iran, some observers saw it as a bad sign for the nuclear negotiations underway in Vienna. After all, if Iran was preparing to sign a nuclear deal with six world powers, why was it enlisting Russia to build more nuclear power stations before the terms of the deal were even agreed?

But US and Western officials and experts say the prospective Russia-Iran energy deal may help resolve one of the toughest issues in the nuclear talks — the size of Iran’s enrichment capacity in a final deal — and they have recently gone out of their way to praise the Russian role in the sensitive nuclear negotiations as being highly constructive, professional and creative.

Much of that rare U.S. praise for Russia extends to Moscow’s lead Iran nuclear negotiator, Deputy Foreign Minister Sergey Ryabkov. The 54-year-old career diplomat has managed to maintain a constructive working rapport with US and European counterparts at the Iran negotiating table, despite the deep strains plaguing Moscow-West relations over Ukraine.

Ryabkov is “a very skillful, professional diplomat who represents Russian interests very well,” Robert Einhorn, a former top member of the US-Iran nuclear negotiating team, told Al-Monitor. “And he has played a very constructive role in these negotiations including in the recent period.

“What helps him is that Russia’s interests in achieving a deal and avoiding military confrontation is consistent with Russia’s commercial interest in concluding further nuclear sales to Iran,” Einhorn, now with the Brookings Institution, added.

Ryabkov "quietly has been an instrumental figure in helping ensure worsening US-Russian bilateral relations in recent years have not derailed P5+1 diplomacy with Iran,” Jofi Joseph, a former US official working on Iran nuclear issues, told Al-Monitor, referring to the six world powers negotiating the Iran nuclear deal. He is also “easy to work with — friendly, self-effacing and always prepared to work through differences in a constructive fashion.”

Ryabkov is "very smart, deliberate and hard-working," said former US Under Secretary of State for Arms Control Ellen Tauscher, who worked with the Russian diplomat on US-Russia arms control issues during Obama’s first term. “Calm, gentlemanly, even courtly. Knows his stuff inside out. Never raises his voice. At the same time, he is a creative diplomat.”

Ryabkov is widely described by foreign counterparts as pragmatic, and among the most effective diplomats in the Russian diplomatic corps. (“Very pragmatic” and “as good as they come,” is how a British diplomat described Ryabkov to US counterparts when he was promoted to deputy foreign minister and lead Russian Iran negotiator in 2008, according to a 2008 US diplomatic cable released by WikiLeaks.)

But he also remains somewhat elusive and reserved. Even some diplomats and scholars who have worked with him fairly closely don’t seem to know much about him personally (married with two children, according to his Russian Foreign Ministry biography), or many details of his background (his English is so good, one scholar noted, wondering if he spent time in the West when he was growing up). He did not respond to a request from Al-Monitor for an interview.

Ryabkov is “warm,” but “very formal,” Samuel Charap, a Russian expert at the International Institute for Strategic Studies and former State Department official, told Al-Monitor. “He is very friendly, but not casual."

“He is the best diplomat they have,” Charap added. “I have not seen as effective of a Russian diplomat” as Ryabkov.

Appreciation for Ryabkov includes diplomats from bitter enemies Iran — with which Russia has a traditionally more cooperative relationship compared with Western members of the P5+1 — and Israel, whose diplomatic counterparts Ryabkov regularly briefs on the Iran negotiations. Ryabkov is “a very decent chap,” an Israeli official told al-Monitor. “I quite like him.” The Russians “want to be optimistic” about prospects for an Iran nuclear deal, the Israeli official added. “They want to project optimism and thinking that there will be a deal.”

Born in Moscow in 1960, Ryabkov graduated from the Moscow State Institute of International Relations in 1982 and immediately joined the Foreign Ministry that year, according to his foreign ministry biography. That is the typical university/career track for a Russian diplomat of his generation, Russia experts said.

Among his formative posts, Ryabkov served from 1999 to 2005 as a senior counselor and then deputy chief of mission at the Russian Embassy in Washington under Russian Ambassador to the United States Yuri Ushakov, who, notably, now serves as foreign policy adviser to Russian President Vladimir Putin. That link to the Kremlin is very important, Russia analysts said.

“I think we have to be clear … that the final decision about any deal with Iran is not going to be made at the Russian Foreign Ministry,” Paul Saunders, a former Bush administration official and current executive director of the Center for the National Interest, told Al-Monitor. “The final decision will be made in the Kremlin and it will be made by President Vladimir Putin. And everyone in Russia knows that, and outside people understand that.”

The fact that Ryabkov served as deputy to Ushakov “is quite significant,” Dimitri Simes, a former Russia adviser to President Richard Nixon and current president of the Center for the National Interest, told Al-Monitor.

Ryabkov "has rather broad responsibilities: Iran, arms control, on top of that, the United States, North America and Latin America," Simes added. In the Russian Foreign Ministry, he is the de facto “point man on the US. He has very good English. He is charming. He always was considered friendly to the US. Certainly those of us who met him in Moscow … with delegations, we always thought he was informative. Obviously he was representing his country, not departing from the script. But it was clear that he was interested in a genuine conversation, in explaining Russian positions."

Russian colleagues and journalists are also admiring. “What struck me was the seriousness of his approach, number one,” a retired Russian diplomat, speaking not for attribution, told Al-Monitor of Ryabkov. His “professionalism, a kind of absence of extremist instincts … His reactions are always balanced.”

He is “smart and decent,” a Russian journalist who regularly covers Ryabkov told Al-Monitor. He is “respectful, talented at words, never condescending.”

Ryabkov himself, speaking after the last round of Iran nuclear negotiations in Vienna last month, projected optimism that a final Iran nuclear accord could be concluded in the coming months, and suggested there was real momentum from progress made in the last days of talks.

"Of course, we will still have to put some serious effort to coordinate technical details, but the main document, I think, will soon be at the final stages of preparedness," Ryabkov said Nov. 25, Russia’s Sputnik news agency reported. "The last four days were more productive in terms of adopted decisions than the last four months."

Behind the scenes, Russia has worked intensively with P5+1 partners and Iran in recent months to develop possible “creative” solutions to bridge the gap between Iran’s ambitions for a robust domestic enrichment capacity and industrial scale nuclear power, and the P5+1’s desire for a limited Iranian enrichment capability in a final deal. Among the solutions considered, negotiators have described, Iran is considering shipping out much of its stockpile of low-enriched uranium to Russia, so that it could operate more centrifuges, while still maintaining a one year “breakout” (the amount of time it would take Iran to produce enough fissile material for a nuclear weapon).

In addition, Russia has offered to build more nuclear power reactors in Iran, for which it would provide the fuel for the lifetime of the reactors, but also offered to work with Iran on fuel fabrication.

Current and former US officials and experts say both proposals help advance possible solutions to one of the most difficult issues in the talks.

The “recent reactor deal between Russia and Iran is very good for the negotiations actually, for every new reactor Russia sells to Iran, Russia intends to provide the fuel for the life of that reactor,” Einhorn said on a Dec. 2 Iran call hosted by the Woodrow Wilson International Center for Scholars. “Thereby, undercutting Iranian arguments that it needs industrial scale enrichment capacity.”

“Fuel-cycle self-sufficiency has been a key Iranian concern throughout the negotiations,” Kelsey Davenport, a nuclear expert with the Arms Control Association, told Al-Monitor. “So this technology would allow them to produce reactor fuel domestically in the event of a fuel supply disruption. Converting enriched uranium to fuel moves it out away from further enrichment, so it poses less of a proliferation risk.”

Beyond its opposition to Iran acquiring nuclear weapons, Russia has commercial reasons to favor an Iran nuclear deal that would enable it to showcase its technology to other clients, said Saunders.

“The Russian nuclear establishment has some very ambitious goals, in terms of their potential role in the global market,” Saunders said. “I think the Russians see for themselves a real market opportunity. But to exploit it, they need to have [a nuclear power reactor] that they build that is really all theirs that they can take people to. And to be able to do that, they need Iran out from under the sanctions, both to pursue the project, but also to have something to show the people they need to be able to.”

Russia’s positive role in the Iran negotiations continues for now, but there are warnings from elements in Russian political and foreign policy circles that such constructiveness might not last forever, amid continued US and European tensions with Russia over its actions in Ukraine, said Charap.

“I think it just depends on how far this goes,” Charap said. “The message came through in Valdai,” from Russian interlocutors speaking to Western counterparts at a foreign policy conference held in the Russian city of Valdai in October, he explained. "'We have not changed our fundamentals of other issues in foreign policy to the world yet. But our patience won’t last forever.'"