The visit for the first time by Lebanese Fatah delegates to attend the movement’s seventh congress has left them with a bittersweet impression of Palestine. 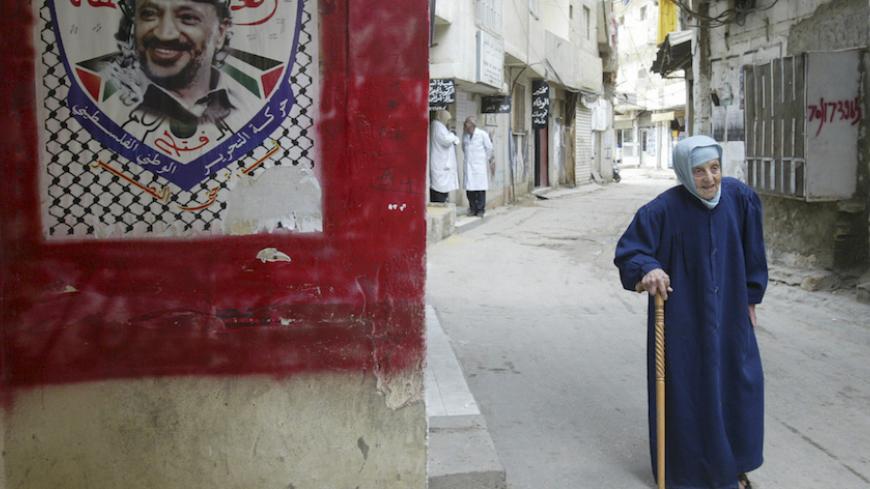 A Palestinian woman walks past an image of Yasser Arafat in Shatila refugee camp near Beirut, May 23, 2007. - REUTERS/Sharif Karim

Mohammad Biqai was 9 years old when he joined the Ashbal youth program of the Fatah movement in Lebanon in 1979. Born in the Ain al-Hilweh refugee camp in southern Lebanon to a Palestinian family from the village of Damoun near Acre — one of the 418 villages destroyed during the founding of Israel around 1948 — Biqai grew up dreaming of the day he and others would return to a liberated Palestine.

His temporary return to Palestine in November, however, did not occur the way he had dreamed it might. Biqai, also known as Abu Adel, was part of a 50-member Lebanese delegation that attended Fatah’s seventh congress Nov. 29. Biqai, who runs the Fatah media program in south Lebanon, had to enter the West Bank on a special permit issued by the Palestinian government in coordination with the Israelis. Some of the Lebanese delegates were invited at the last minute, after the Jordanian Fatah delegates decided not to come for fear of losing their Jordanian citizenship, as Jordan made it clear that Palestinian Jordanians can’t have dual citizenship.

In an interview with Al-Monitor, Biqai described his feelings when crossing the bridge from Jordan, saying, “I can’t describe my first moment at the border; it was a mixture of happiness and anger. I was happy to see Palestine for the first time after struggling for it all my life. But I was angry and sad when I saw the Israeli flag at the bridge.”

After going through passport control, Biqai and several other delegates visited Jericho and Hizma village in Jerusalem governorate on their way to Ramallah, where the congress was held. Passing through checkpoints and seeing signs of the occupation on the way to Ramallah also made him angry. “I was angry to see the wall, the Israeli checkpoints and the settlements, but I was happy to be finally in Ramallah,” he added.

Along with other delegates, Biqai visited the grave of Fatah founder Yasser Arafat.

“When we entered Ramallah, we went to the grave of Arafat. I had hoped to see him when he was still alive and kiss his hands the way he kissed the hands of the injured and the children of martyrs,” Biqai said.

During the Fatah congress, four delegates from Lebanon — Rifat Shana’a, Ashraf Daour, Amineh Jibril and Fathi Abu Ardat — were elected to the movement’s Revolutionary Council. “Fatah in Lebanon is one of the strongest [branches] in the world, but we also have many challenges, which Palestinians who live in Lebanon face,” he said.

Biqai noted that while he was happy that the number of Revolutionary Council members from Lebanon had increased by one, he and the others had hoped to have someone from Lebanon be on the Central Committee. “Two important areas are not represented in the Central Committee: Lebanon and Jerusalem. I hope President [Mahmoud] Abbas will use his allotted seats to appoint individuals from these two locations in the top Fatah body."

Biqai added that the Lebanese delegation visited Abbas after the congress to congratulate him and to talk about the many problems facing the Palestinians in Lebanon, including that they are not allowed to work legally in 83 professions and that the student scholarship fund in Lebanon needs additional financial support.

Perhaps the most important part of the visit of the Lebanese delegation — especially for those who had not been to the occupied territories before — was their visits to Nablus, Jenin, Hebron, Jerusalem and Nabi Saleh. “In all honesty, what we saw in Ramallah, we don’t see in Beirut. Some of the Palestinian ministries and government offices are better than what I have seen anywhere, the services are organized, you can see the building of the infrastructure of the state in Palestine,” the Lebanese Fatah delegate said.

While praising the infrastructure and services, Biqai complained about the prices. “Palestine is more expensive than Jounieh,” he said, referring to a wealthy coastal city north of Beirut.

Biqai and other Lebanese Fatah members, however, were not allowed to stay in Palestine. “President Abbas had been trying to get us Palestinian passports, but the Israeli government refused to issue national identity numbers to us,” he said. Without these ID numbers, which passport control offices around the world can verify electronically, a Palestinian passport is worthless.

The holding of the seventh Fatah congress in Ramallah has given Palestinian delegates from Lebanon and other parts of the world a rare opportunity to visit and see Palestine under occupation. No doubt, the visit has left a powerful impression on those who came, and it will encourage them to continue in the struggle for the liberation and the independence of Palestine. As the Fatah movement, which was launched on Jan. 1, 1965, turns 52 and the anniversaries of the decades-old Nakba and the occupation are remembered, Palestinians are still unable to feel complete until they are fully free and independent.