After the attack in Istanbul claimed by the Kurdistan Freedom Falcons, the Turkish government launched raids to detain more than 200 people, including Kurdish leaders. 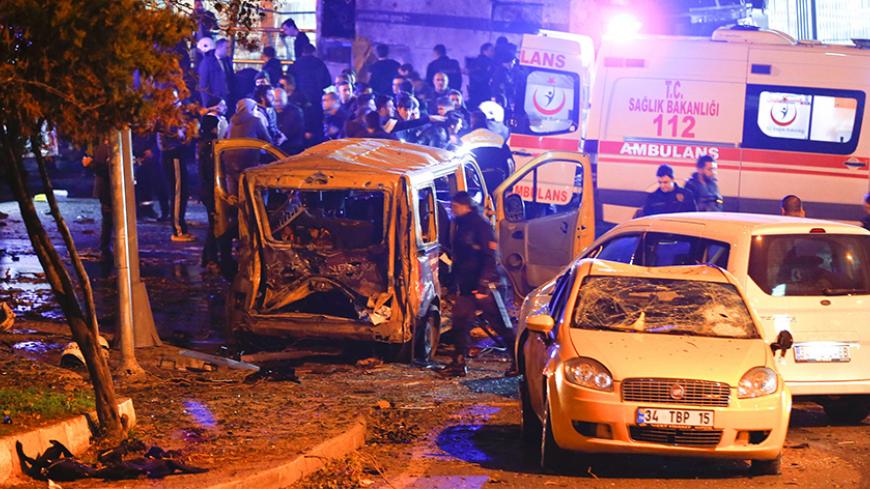 Police arrive at the site of an explosion in central Istanbul, Turkey, Dec. 10, 2016. - REUTERS/Murad Sezer

At least 235 people were detained Dec. 12 in raids across Turkey over alleged ties to Kurdish militant groups, as Turkish leaders vowed to avenge the deaths of some 44 people killed in twin explosions that rocked the heart of Istanbul Dec. 10.

Interior Minister Suleyman Soylu said those responsible for the blasts, claimed by the Kurdistan Freedom Falcons (TAK), the urban terror offshoot of the outlawed Kurdistan Workers Party (PKK), would be “wiped from this geography.” Turkish warplanes bombed PKK targets in Kurdish-controlled northern Iraq, as is customary after Kurdish-linked attacks.

Most of the Istanbul victims were riot police massed outside the Besiktas soccer stadium during a match. The newly revamped stadium overlooks Dolmabahce Palace, one of the city’s main tourist attractions and where the president receives foreign dignitaries. The policemen and at least four civilians were killed when a bomb-laden vehicle exploded near them. The second blast occurred 45 seconds later, when a suicide bomber detonated at Macka Park, which borders the city’s upscale Macka and Tesvikiye neighborhoods.

The TAK said it had carried out the attack in retaliation for the Turkish army’s continued operations in the mainly Kurdish southeast, where urban battles have left a string of towns almost in ruins, and to protest the imprisonment of PKK leader Abdullah Ocalan.

The carnage in Istanbul marks the fourth major attack carried out by the TAK this year. The group had also claimed responsibility for two separate Ankara attacks that also targeted police in February and March. At least 67 people, including numerous civilians, were killed.

The government insisted that the Istanbul blasts had been orchestrated to sabotage a constitutional reform package that was unveiled the day of the attacks. The changes, which have triggered bitter debate over Turkey's downward slide under authoritarian President Recep Tayyip Erdogan, are tailored to further concentrate power in his hands. “Whenever Turkey takes a positive step for the future, we are immediately faced with a response of blood, lives, violence, chaos — delivered by terrorist organizations,” Erdogan charged.

Many of those picked up in the government sweeps were members of the pro-Kurdish Peoples’ Democratic Party (HDP), whose leaders roundly condemned the Istanbul attacks. HDP Co-chair Selahattin Demirtas, who is in jail along with hundreds of other party members and affiliates over alleged connections to the PKK, said through his lawyers, “I condemn in the strongest terms the atrocious massacre that took place in Istanbul Saturday. However difficult our circumstances, we should not abandon our claim for peace, we should not lose our hopes.”

According to Nilufer Koc, the co-chair of the Kurdistan National Congress, at least 55 mayors elected on pro-Kurdish party tickets were behind bars on thinly supported charges of helping organize PKK violence. That figure rose to 56 when Yuksek Mutlu, the co-mayor of Akdeniz, a district in the southern port city of Mersin, was detained today, also on terror charges.

HDP spokesman Ayhan Bilgen said members were marooned in the party’s Istanbul headquarters, encircled by riot police. “Our friends are not being allowed to come out and make a press statement. Our members of parliament are not being allowed inside,” Bilgen complained. “Since July 22, 7,432 of our party members have been detained. Two thousand three hundred forty-five have been arrested. The numbers are growing.”

The government says the HDP’s failure to call out the PKK over its attacks is proof of its complicity. Demirtas’ statement made no reference to the TAK. Meanwhile, the PKK, for its part, says it has severed all ties with the group.

Like many experts, Aliza Marcus, the author of “Blood and Belief,” one of the most authoritative accounts on the inner workings of the PKK, contends that the two are connected. “TAK (PKK affiliate) claims Istanbul attack,” she tweeted, adding, “Resuming peace talks with Ocalan 1 way to end cycle of horrific violence.”

Until recently, Erdogan, the first Turkish leader to hold direct peace talks with Ocalan and the PKK, would have agreed.